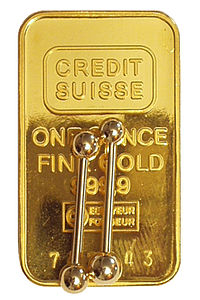 Barbell style piercing jewelry is composed of a straight bar and with a bead on each end, one or both beads unscrewable for removal and/or changing of the beads. Often one of the beads is fixed, either via epoxy or welding, so that only one bead is used to install or remove the jewelry. Barbell threads are usually right-handed.

They are named because they resemble the barbells that are used in weightlifting. 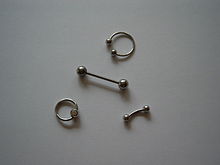 Also known as a navel curve or curve, so named because of their curvature. A curved barbell is mechanically identical to a straight barbell, except for being curved. Curvature on a curved barbell can range from almost straight to circular, with some barbells actually being spiral, with the ends overlapping but separated to allow the insertion of the jewelry. A variation on this design is a J-bar, a slightly curved barbell (sometimes referred to as a bananabell or banana barbell) with a 90 degree bend near one end, used in vertical navel piercings to position the decorative end of the jewelry more appropriately. They can be either internally threaded or externally threaded.

Also known as horseshoe barbells due to their shape, they are used in any number of piercings, including earrings, tragus rings, nasal septum piercings, madisons, or even horizontal clitoral hood piercings, although the latter is less common, as the clitoris is deprived of the stimulation gained from a properly positioned captive bead ring.

Used in surface piercings. A surface bar is a barbell where the bar has a pair of 90 degree bends, in the same direction (similar to a staple), to allow the jewelry to be used for surface piercings. This design minimizes the pressure that would be caused by other jewelry designs that contribute to rejection in healing surface piercings. Most surface bars are custom made to fit the individual piercing.

Beads for barbells can vary widely in design and appearance, although the vast majority of beads are simply spherical in design. That being said, any shape that threads can be tapped into can be used as a bead. Cubes, triangles, cylinders, cones, disks, and other basic shapes are common alternative bead designs. Some large gauge barbells, especially those used in tongue piercings, use "smartie beads", flattened circular beads, to prevent the jewelry from damaging the gums and teeth and allowing free movement of the tongue. There also exist "bondage" beads, which are dimpled to accept a captive bead ring. Miniature vibrators also exist.

Barbell style jewelry can and is made from any metal appropriate for making body jewellery. Flexible barbells made from Teflon or tygon tubing are often used in experimental surface or deep tissue piercings. Beads do not penetrate the body, so often materials not usually considered safe for piercing can be used in a decorative manner such as acrylic, glass, or organic materials.

Although at first glance the manufacture of threaded jewelry might appear to be of contemporary origin, there are examples of externally threaded, straight barbells being used by tribal people, most notably the Dayak of Borneo. In contemporary society, barbell style jewelry was popularized by Jim Ward, founder of Gauntlet (the first body piercing studio in the United States), in the 1970s. He was introduced to barbell style jewelry by Horst Heinrich Streckenbach "Tattoo Samy"[1] (1926-2001), a tattooist and piercer from Frankfurt, Germany, and his student Manfred "Piker" Kohrs from Hanover, Germany.

"The first barbells I recall came from Germany. Doug had made contact with Tattoo Samy, a tattooist and piercer from Frankfurt. Over the years Samy came to the States a number of times and frequently showed up in LA to visit Doug. On one of his first visits he showed us the barbell studs that he used in some piercings. They were internally threaded, a feature that made so much sense that I immediately set out to recreate them for my own customers." Jim Ward's name is synonymous with the origins of western body piercing. His magazine PFIQ was also important in the development of body piercing.[citation needed]

Tygon is a registered trademark of the Saint-Gobain Corporation.