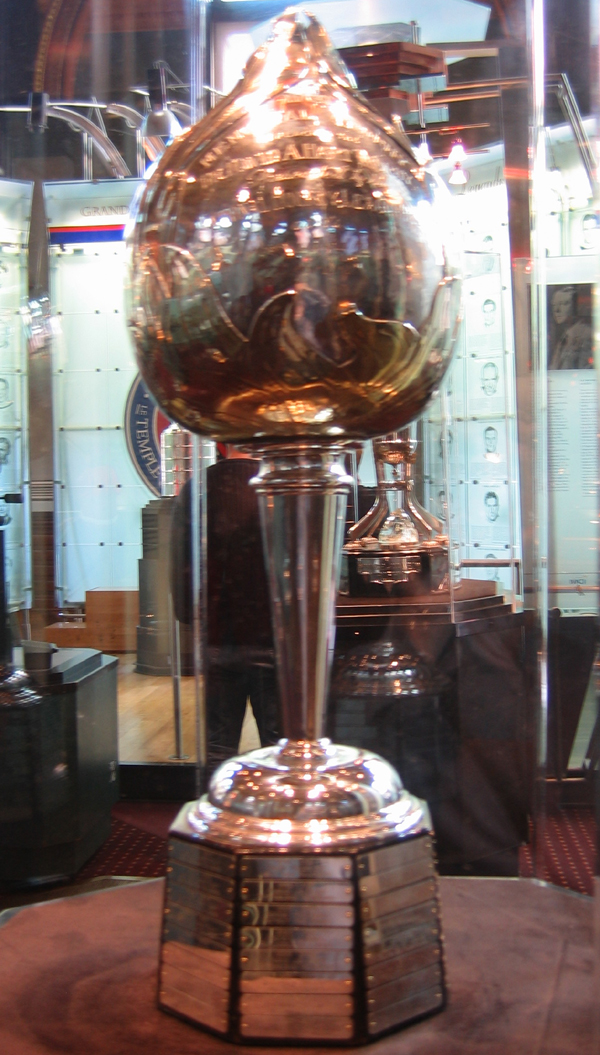 Established=1924
Holder=
Awarded= in the

The Hart Memorial Trophy is named in honour of Canadian Dr. David Hart. Dr. Hart, who donated the original trophy to the NHL, was the father of , a former Coach and General Manager of the hockey club. The Hart Trophy was first awarded at the conclusion of the . The winner of the first Hart Trophy was of the Ottawa Senators. The original "Hart Trophy" was retired in in 1960, and the NHL began presenting a new trophy, which was dubbed the "Hart Memorial Trophy" in its place. With the exceptions of and , every eligible player who won the Hart Trophy has been inducted into the Hall of Fame.

won the award a record nine times during his career, eight consecutively. He has been named MVP more times than any other player in the history of the other three Major Professional Leagues (, , and ). is second, having won the MVP award seven times in Major League Baseball. Gretzky and his teammate are the only players to win the Hart Trophy with more than one team. [cite web|url=http://www.nhl.com/hockeyu/history/gretzky/99reasons.html|title=99 Reasons Why Wayne Gretzky is "The Great One"|accessdate=2007-07-31|publisher=NHL.com] In 1990, took the Hart over by a margin of two votes, the difference being a single first-place vote.

Players from the have won the award sixteen times; players from are second with twelve winners, and the and have seen players win the award nine times. became the first Hart Trophy winner to switch clubs during his winning campaign in , having played for both the and that year.

The voting is conducted at the end of the regular season by members of the Professional Hockey Writers Association, and each individual voter ranks their top five candidates on a 10-7-5-3-1 points system. [cite web|url=http://sportsillustrated.cnn.com/inside_game/jon_dolezar/news/2003/04/01/dolie_insider/|title=Foppa shows the most Hart|accessdate=2007-08-01|date=|author=Jon Dolezar |publisher=SI.com] Three finalists are named and the trophy is awarded at the NHL Awards ceremony after the playoffs.

The closest the voting for the Hart Trophy has ever come was in the 2001–02 season, when and tied in the total voting. The tiebreaker for choosing the Hart Trophy winner in such a case is number of first-place votes: Theodore, who had 86 first-place votes to Iginla's 82, claimed it. [cite web|url=http://www.nhl.com/hockeyu/history/trophies/awards062002.html|title=Theodore wins Hart, Vezina trophies|accessdate=2007-07-31|date=|author=Shawn P. Roarke|publisher=NHL.com]

In 2008, NHL.com's official online shop came under criticism after they placed a T-shirt advertising as the Hart winner on sale a week before the winner was revealed. A spokesperson for the NHL said "in an effort to offer our fans the merchandise they want in a timely manner following an event such as the NHL Awards, our licensees prepare product for all possible outcomes. In this situation, the link for one of the possible products became live early through an error by our e-commerce provider." [cite web|url=http://www.tsn.ca/nhl/story/?id=239912&lid=headline&lpos=secStory_nhl |title=Did NHL Shop Reveal Ovechkin as Hart Winner?|accessdate=2008-06-12|date=|publisher=TSN.ca] Ovechkin was later revealed to be the winner.