Are You a Rebel?

Are You a Rebel?

Infobox Album |
Name = Are You a Rebel?
Type = studio
Artist = 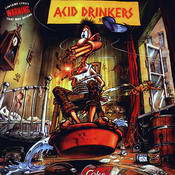 
"Are You a Rebel?" is the first album by a polish thrash metal band, . It is also the first album by a polish metal band to be released on . The recording lasted for 13 days and was done in "Studio Giełda", .Interestingly enough, the first release of the album was made by an English label Under One Flag Records, and wasn't distributed in Poland until April 1991, when Polskie Nagrania Muza decided to put it out.

The first track on "Are You a Rebel?" is one of the oldest songs created by the band. Its lyrics are about Titus's friend from Army. The album is also full of band's typical humour, a great example of which is the song "Woman with the Dirty Feet". Nevertheless, the most well known tracks from this release are definitely "Barmy Army" and "I F... the Violence" which are played live even to these days.