Stockholm County (Stockholms län) is a county or län (in Swedish) on the Baltic sea coast of Sweden. It borders Uppsala County and Södermanland County. It also borders Mälaren and the Baltic Sea. The city of Stockholm is the capital of Sweden. Stockholm County is divided by the historic provinces of Uppland (Roslagen) and Södermanland (Södertörn). More than one fifth of the Swedish population lives in the county. Stockholm County is also one of the statistical riksområden (national areas) according to NUTS:SE, Nomenclature of Territorial Units for Statistics within the EU.

Arms granted in 1968. The arms for the County of Stockholm is a combination of the arms of Uppland, Södermanland and the City of Stockholm. When it is shown with a royal crown it represents the County Administrative Board. 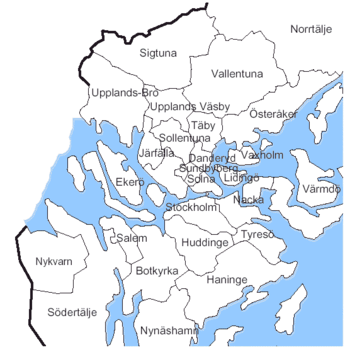 The main aim of the County Administrative Board is to fulfil the goals set in national politics by the Parliament and the Government, to coordinate the interests of the county, to promote the development of the county, to establish regional goals and safeguard the due process of law in the handling of each case. The County Administrative Board is a Government Agency headed by a Governor.

Stockholm county council (Stockholms läns landsting) is the County Council of Stockholm County in Sweden. Its main responsibilities are for the public healthcare system and public transport.

The president of the committee also holds the title Commissioner of Finance. The current[update] commissioner is Catharina Elmsäter-Svärd, of the Moderate Party. The members of the executive committee (landstingsstyrelsen) represent both the political majority and the opposition, with responsibility for implementing policies approved by the County Council.

The council election results for 2010:

The county council operates most of the hospitals in the county, some of the major facilities are:

The county council is responsible for the public transport in Stockholm. The main organizer of the transportation system is two corporations owned by the county. Storstockholms Lokaltrafik, SL, handles the bus, tram and train services while the boat traffic is handled by Waxholmsbolaget. The operation and maintenance of the public transport systems is delegated by the companies to several contractors.

The county is also responsible for paratransit services and Närtrafiken, a number of share taxi routes.

The principal agency for the police department is the Stockholm County Police Authority (Polisstyrelsen i Stockholms Län), a government-appointed body consisting of local councillors from the county, and the Commissioner.