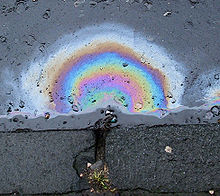 Diesel is immiscible in water. The bright rainbow pattern is due to thin film optical interference.

/mɪsɨˈbɪlɨti/ is the property of liquids to mix in all proportions, forming a homogeneous solution. In principle, the term applies also to other phases (solids and gases), but the main focus is usually on the solubility of one liquid in another. Water and ethanol, for example, are miscible since they mix in all proportions.

By contrast, substances are said to be immiscible if in some proportion, they do not form a solution. For example, diethyl ether is fairly soluble in water, but these two solvents are not miscible since they are not soluble in all proportions.

In organic compounds, the weight percent of hydrocarbon chain often determines the compound's miscibility with water. For example, among the alcohols, ethanol has two carbon atoms and is miscible with water, whereas octanol with a C8H17 substituent is not. Octanol's immiscibility leads it to be used as a standard for partition equilibria. This is also the case with lipids; the very long carbon chains of lipids cause them to almost always be immiscible with water. Analogous situations occur for other functional groups. Acetic acid (CH3COOH) is miscible with water, whereas valeric acid (C4H9COOH) is not. Simple aldehydes and ketones tend to be miscible with water, since a hydrogen bond can form between the hydrogen atom of a water molecule and the unbonded (lone) pair of electrons on the carbonyl oxygen atom.

Immiscible metals are unable to form alloys. Typically, a mixture will be possible in the molten state, but upon freezing the metals separate into layers. This property allows solid precipitates to be formed by rapidly freezing a molten mixture of immiscible metals. One example of immiscibility in metals is copper and cobalt, where rapid freezing to form solid precipitates has been used to create granular GMR materials.

There are examples of immiscible metals in the liquid state. One with industrial importance is that liquid zinc and liquid silver are immiscible in liquid lead, while silver is miscible in zinc. This leads to the Parkes process, an example of liquid-liquid extraction, whereby lead containing any amount of silver is melted with zinc. The silver migrates to the zinc, which is skimmed off the top of the two phase liquid, and the zinc is boiled away leaving nearly pure silver.

Substances with extremely low configurational entropy, especially polymers, are unlikely to be miscible in one another even in the liquid state.