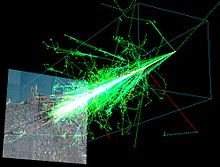 Cosmic ray air shower created by a 1TeV proton hitting the atmosphere 20 km above the Earth. The shower was simulated using the AIRES package. Animated 3d models of this and other showers can be found on COSMUS.

An air shower is an extensive (many kilometres (miles) wide) cascade of ionized particles and electromagnetic radiation produced in the atmosphere when a primary cosmic ray (i.e. one of extraterrestrial origin) enters the atmosphere. The term cascade means that the incident particle, which could be a proton, a nucleus, an electron, a photon, or (rarely) a positron, strikes a molecule in the air so as to produce many high energy ions (secondaries), which in turn create more, and so on.

The original particle arrives with high energy and hence a velocity near the speed of light, so the products of the collisions tend also to move generally in the same direction as the primary, while to some extent spreading sidewise. In addition, the secondary particles produce a widespread flash of light in forward direction due to the Cherenkov effect, as well as fluorescence light that is emitted isotropically from the excitation of nitrogen molecules. The particle cascade and the light produced in the atmosphere can be detected with surface detector arrays and optical telescopes. Surface detectors typically use Cherenkov detectors or Scintillation counters to detect the charged secondary particles at ground level. The telescopes used to measure the fluorescence and Cherenkov light use large mirrors to focus the light on PMT clusters.

The longitudinal profile of the number of charged particles can be parameterized by the Gaisser-Hillas function.