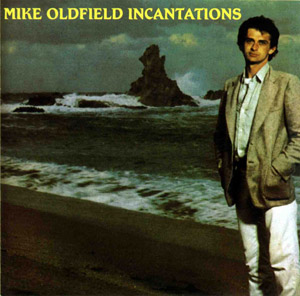 "Incantations" is a written and produced by . Released in late 1978 (see ), it was his fourth studio album, and the first to feature a piece divided into more than two movements.

The current issue fits the entire album onto one disc. It is the second longest work Oldfield has ever released.

Despite being the most large-scale work by Oldfield, many moments of the album can be described as being compositionally minimalist, featuring melodic lines repeated in simple forms with only a few instruments at a time.

"Incantations" was recorded at Througham, Mike Oldfield's home after he completed "Ommadawn". It was his desire to create an album that would make use of a small orchestra, and some of his own statements indicate that he may have moved into his new house simply because it had room for one. He had used "extra-instrumental" ensembles previously, such as the brass ensemble on "" and the string/choir group on "Hergest Ridge" before that, but they form a major part of "Incantations".

It was during the creation of "Incantations" that Mike Oldfield underwent the assertiveness training course "Exegesis", and between the earlier parts and the later parts of the album there is a definite difference in style, possibly due to the course. The course may have had added effects to bolster his confidence, as it was almost immediately thereafter that Oldfield went on his first live tour with "Incantations".

The lyrics in "Part Two" are taken from Longfellow's "", though rearranged in places to conform more to the music.

The lyrics in "Part Four" are 's "Ode to Cynthia" from "", but adjusted again to match the music.

* Along with some other pieces of Oldfield's work, a different version of "Part Four" was used for the soundtrack of Tony Palmer's ""; the lyrics there are from 's "A Spell for Creation".
* When the CD version was released, due to the shorter length of the format at the time, many early pressings have "Part Three" shortened from 16:59 down to 13:49 by cutting from the beginning. When 74-minute CDs became the norm and quality control was increased, the full cut of "Part Three" was restored. All modern pressings have the full version of the piece.
* Essentially, the first few minutes of "Part Two" are backward. When this section is played in reverse, music very closely resembling one of the main themes from "Part One" is heard.

The cover was once again done by . The beach in the cover photograph is , in . The current CD sleeve has a different than the original album. The LP artwork is shown at the top of the infobox, the CD at the bottom. Early copies of the album came with a poster featuring a subtly different photograph from the one used on the cover.

The cover photograph used may have been altered by Key, which we can see from the apparent 'cut marks' around Oldfield on the image. There have been some theories about why this may have been done; one being that Oldfield was not on the beach (which is contradicted by other photographs from the shoot) or Key simply cut and paste the image for artistic reasons.