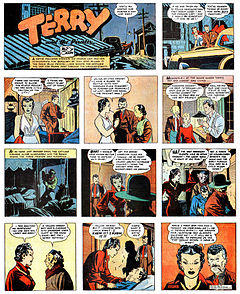 A Dragon Lady is a stereotype of East Asian women as strong, deceitful, domineering or mysterious.[1] The term's origin and usage is Western, not Chinese. Inspired by the characters played by actress Anna May Wong,[2] the term was coined from the villain in the comic strip Terry and the Pirates.[1][2] The term has been applied to powerful Asian women and to a number of racially Asian film actresses. The stereotype has generated a large quantity of sociological literature. Today, "Dragon Lady" is often applied anachronistically to refer to persons who lived before the term became part of American slang in the 1930s. It has also been used misogynistically to refer to any powerful but prickly woman, usually in a derogatory fashion.

Although sources such as the Oxford English Dictionary[3] list uses of "dragon" and even "dragoness" from the 18th and 19th centuries to indicate a fierce and aggressive woman, there does not appear to be any use in English of "Dragon Lady" before its introduction by Milton Caniff in his comic strip Terry and the Pirates. The character first appeared on December 16, 1934, and the "Dragon Lady" appellation was first used on January 6, 1935.[4] The term does not appear in earlier "Yellow Peril" fiction such as the Fu Manchu series by Sax Rohmer or in the works of Matthew Phipps Shiel such as The Yellow Danger (1898) or The Dragon (1913). However, a 1931 film based on Rohmer’s The Daughter of Fu Manchu, titled Daughter of the Dragon, is thought to have been partly the inspiration for the Caniff cartoon name.[2]

Terry and the Pirates

Terry and the Pirates was an action-adventure comic strip created by cartoonist Milton Caniff. Joseph Patterson, editor for the Chicago Tribune New York Daily News syndicate, hired Caniff to create the new strip, providing Caniff with the idea of setting the strip in the Orient. A profile of Caniff in Time recounts the episode:

Patterson... asked: "Ever do anything on the Orient?" Caniff hadn't. "You know," Joe Patterson mused, "adventure can still happen out there. There could be a beautiful lady pirate, the kind men fall for." In a few days Caniff was back with samples and 50 proposed titles; Patterson circled Terry and scribbled beside it and the Pirates.[5]

Caniff's biographer R.C. Harvey suggests[4] that Patterson had been reading about women pirates in one of two books (or both) published a short time earlier: I Sailed with Chinese Pirates by Aleko Lilius[6] and Vampires of the Chinese Coast by Bok[7] (pseudonym for unknown). Women pirates in the South China Sea figure in both books, especially the one by Lilius, a portion of which is dedicated to the mysterious and real-life "queen of the pirates" (Lilius’ phrase), named Lai Choi San (Chinese: 來財山). "Lai Choi San" is a transliteration from Cantonese, the native language of the woman, herself—thus, the way she pronounced her own name. Caniff appropriated the Chinese name, Lai Choi San, as the "real name" of his Dragon Lady, a fact that led both Lilius and Bok to protest.[8] Patterson pointed out that both books claimed to be non-fiction and that the name belonged to a real person; thus, neither the fact of a woman pirate nor her name could be copyrighted. (Neither Bok nor Lilius had used the actual term "Dragon Lady.") Sources are not clear on whether it was Patterson or Caniff who coined that actual term, though it was almost certainly one of the two.

Since the 1930s, when "Dragon Lady" became fixed in the English language, the term has been applied countless times to powerful Asian women, from Soong May-ling, also known as Madame Chiang Kai-shek, to Madame Ngo Dinh Nhu of Vietnam and to any number of racially Asian film actresses. That stereotype—as is the case with other racial caricatures—has generated a large quantity of sociological literature.

Today, "Dragon Lady" is often applied anachronistically to refer to persons who lived before the term became part of American slang in the 1930s. For example, one finds the term in recent works about the "Dragon Lady" Empress Dowager Cixi (Chinese: 慈禧太后; pinyin: Cíxī Tàihòu; Wade–Giles: Tz'u-Hsi T'ai-hou), who was alive at the turn of the 19th to the 20th Century,[9] or references to Chinese-American actress Anna May Wong as having started her career in the 1920s and early 1930s in "Dragon Lady" roles.[10] In both these cases, however, articles written in the early 1900s about the Empress Dowager or reviews of Wong’s early films such as The Thief of Bagdad (1924) or Daughter of the Dragon (1931) — reviews written when the films appeared — make no use of the term "Dragon Lady".[11] (One writer, however, did refer to the Empress Dowager as "a little lady Bismarck.")[12] Today’s anachronistic use of "Dragon Lady" in such cases may lead the modern reader to assume that the term was in earlier use than appears to be the case.

The term was recently used in the episode "Margin of Error" of the acclaimed HBO series, The Wire. In the episode, Namond, an aspiring drug dealer, watches as his mother, De'Londa Brice, fiercely berates Namond's boss Bodie over her son's employment on his corner. After Bodie concedes he exclaims, "Your mom, that's what niggas call a Dragon Lady." Bodie's usage of the term in this sense is an example of the stereotype not being limited to just Asian-American women but African-American women as well.

Whereas "Dragon lady" is a stereotype in Western culture, it is not in Eastern culture. For one thing, Western dragons are fire-breathing. Eastern dragons mostly live in water and their job is to bring rain. The term sometimes has a positive connotation in Chinese.

Long Nu (龍女, dragon lady) is a disciple of Bodhisattva Guanyin in folklore. In "The Return of the Condor Heroes", Xiaolongnü (Little Dragon Maiden) is the female main character.