Agricultural extension was once known as the application of scientific research and new knowledge to agricultural practices through farmer education. The field of extension now encompasses a wider range of communication and learning activities organised for rural people by professionals from different disciplines, including agriculture, agricultural marketing, health, and business studies.

Extension practitioners can be found throughout the world, usually working for government agencies. They are represented by several professional organizations (such as APEN), networks (such as AGREN) and extension journals (such as Journal of Extension).

Agricultural extension agencies in developing countries have received large amounts of support from international development organisations such as the World Bank and the Food and Agriculture Organization(FAO) of the United Nations.

The term extension was first used to describe adult education programmes in England in the second half of the 19th century; these programmes helped to expand - or extend - the work of universities beyond the campus and into the neighbouring community. The term was later adopted in the United States of America, while in Britain it was replaced with "advisory service" in the 20th century. A number of other terms are used in different parts of the world to describe the same or a similar concept:

In the US, an extension agent is a university employee who develops and delivers educational programs to assist people in economic and community development, leadership, family issues, agriculture and environment. Another program area extension agents provide is 4-H and Youth. Many extension agents work for cooperative extension service programs at [[land-

There is no widely accepted definition of agricultural extension. The ten examples given below are taken from a number of books on extension published over a period of more than 50 years:

Men and women have been growing crops and raising livestock for approximately 10,000 years. Throughout this period, farmers have continually adapted their technologies, assessed the results, and shared what they have learned with other members of the community. Most of this communication has taken the form of verbal explanations and practical demonstrations, but some information took a more durable form as soon as systems of writing were developed. Details of agricultural practices have been found in records from ancient Egypt, Mesopotamia and China going back more than 3,000 years.

It is not known where or when the first extension activities took place. It is known, however, that Chinese officials were creating agricultural policies, documenting practical knowledge, and disseminating advice to farmers at least 2,000 years ago. For example, in approximately 800 BC, the minister responsible for agriculture under one of the Zhou dynasty emperors organized the teaching of crop rotation and drainage to farmers. The minister also leased equipment to farmers, built grain stores and supplied free food during times of famine.[11]

The birth of the modern extension service has been attributed to events that took place in Ireland in the middle of the 19th century.[12] Between 1845–51 the Irish potato crop was destroyed by fungal diseases and a severe famine occurred (see Great Irish Famine). The British Government arranged for "practical instructors" to travel to rural areas and teach small farmer how to cultivate alternative crops. This scheme attracted the attention of government officials in Germany, who organized their own system of traveling instructors. By the end of the 19th century, the idea had spread to Denmark, Netherlands, Italy, and France.

The term "university extension" was first used by the Universities of Cambridge and Oxford in 1867 to describe teaching activities that extended the work of the institution beyond the campus. Most of these early activities were not, however, related to agriculture. It was not until the beginning of the 20th century, when colleges in the United States started conducting demonstrations at agricultural shows and giving lectures to farmer’s clubs, that the term "extension service" was applied to the type of work that we now recognize by that name.

In the United States, the Hatch Act of 1887 established a system of agricultural experiment stations in conjunction with each state's land-grant university, and the Smith-Lever Act of 1914 created a system of cooperative extension to be operated by those universities in order to inform people about current developments in agriculture, home economics, and related subjects.

Four generations of extension in Asia

The development of extension services in modern Asia has differed from country to country. Despite the variations, it is possible to identify a general sequence of four periods or "generations":[13]

The fourth generation is well established in some countries, while it has only just begun in other places. While it seems likely that participatory approaches will continue to spread in the next few years, it is impossible to predict the long-term future of extension. Compared to 20 years ago, agricultural extension now receives considerably less support from donor agencies. Among academics working in this field, some have recently argued that agricultural extension needs to be reinvented as a professional practice.[10] Other authors have abandoned the idea of extension as a distinct concept, and prefer to think in terms of "knowledge systems" in which farmers are seen as experts rather than adopters.[14]

The term "extension" has been used to cover widely differing communication systems. Two particular issues help to define the type of extension: how does communication take place, and why does it take place.[13] 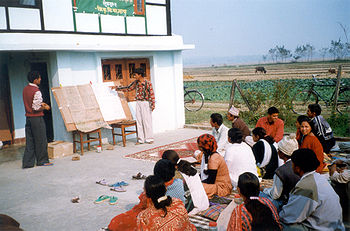 How communication takes place in an extension system: paternalism versus participation

Early books on extension often describe a model of communication that involved the transmission of messages from "senders" to "receivers". As part of this model, senders are usually people in authority, such as government planners, researchers, and extension staff, while receivers are usually farmers who are relatively poor and uneducated. Although this model might include something called "feedback", it is clear that the senders are in control of the communication process.

The transmission model of communication is closely related to the idea that extension workers are the link (i.e. message carriers) between researchers (senders) and farmers (receivers). Extension programmes based on this model has been described as "paternalistic"; in other words, the actors in the communication process have a parent/child or teacher/student relationship. Other authors have used the term "top-down" to describe these programmes.

In many countries, paternalistic extension is gradually being replaced by more participatory approaches, in which the knowledge and opinions of farmers is considered to be just as important as that of researchers or government officials. Participatory approaches involve information-sharing and joint decision-making. The terms "interactive" and "bottom-up" have been used to describe these approaches.

The development of participatory extension requires a re-examination of the communication process. At the present time, no single description has replaced the transmission model that is referred to above, but two ideas are becoming widely accepted:

The related, but separate field of agricultural communication has emerged to contribute to in-depth examinations of the communication processes among various actors within and external to the agricultural system. This field would refer to the participatory extension model as a form of public relations rooted two-way symmetrical communication based on mutual respect, understanding, and influence between an organization and its stakeholders (publics).[15]

Although extension programmes have many different goals, most programmes fall into one of two basic categories:

There is, of course, a close relationship between knowledge and behaviour; changes in the former often lead to a change in the latter.

If government policy-makers, project managers or researchers direct the topics addressed and projects undertaken, then the purpose of extension is to change behaviour. This approach to extension has been variously described as directive extension, social marketing and propaganda.

If farmers and other rural people direct the extension towards their own needs, then the purpose of extension is changing knowledge. This knowledge helps rural people make their own decisions regarding farming practices. This approach to extension is closely related to non-formal education and conscientization.

Any particular extension system can be described both in terms of both how communication takes place and why it takes place. It is not the case that paternalistic systems are always persuasive, nor is it the case that participatory projects are necessarily educational. Instead there are four possible combinations, each of which represents a different extension paradigm, as follows:[13]

It must be noted that there is some disagreement about whether or not the concept and name of extension really encompasses all four paradigms. Some experts believe that the term should be restricted to persuasive approaches, while others believe it should only be used for educational activities. Paulo Freire has argued that the terms ‘extension’ and ‘participation’ are contradictory.[16] There are philosophical reasons behind these disagreements. From a practical point of view, however, communication processes that conform to each of these four paradigms are currently being organized under the name of extension in one part of the world or another. Pragmatically, if not ideologically, all of these activities are agricultural extension.

Creative Extension is a new branch of agricultural extension pioneered by the Krishi Vigyan Kendra, Kannur under Kerala Agricultural University. Creative Extension uses art form for communication of innovation to farmers and calls for inputs from people with histrionic talents