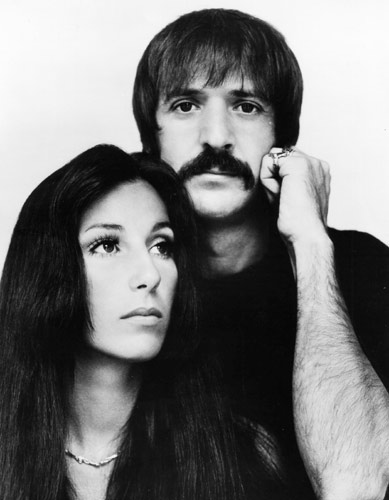 Cherilyn Sarkisian first met in a Los Angeles coffee shop in November 1962, when she was sixteen. Sonny was already twenty-seven and working for record producer at Gold Star Studios in Hollywood. The two became fast friends, eventual lovers, and later, husband and wife. Through Sonny, Cher (as she was called early on for short) eventually got to sing back-up on several of Spector’s classic recordings, including the monumental "" by and "" By .

With Sonny continuing to write, arrange and produce the songs, Sonny and Cher’s first incarnation was as the duo "Caesar and Cleo". They received little attention. They later re-emerged as "Sonny and Cher", and released their first album in the summer of 1965. This album contained the overnight smash and eventual number-one single "" (1965). Cher was nineteen years old. Several more top forty hits would follow, most famously "" (U.S. #8) and "" (U.S. #6).

The two became a quick sensation, travelling and performing around the world usually dressed in animal skins with Sonny wearing knee high caveman boots, and Cher going barefoot. Periodic solo releases continued during the Sonny & Cher days, including a major success with "" for Cher in 1966. They did become briefly controversial in Los Angeles for siding with the young people being harassed on the ; as a result, they were removed from their promised position of honor in the in January of [http://www.justabovesunset.com/2006/id186.html] .

In an attempt to capitalize on the duo’s success, Sonny penned their first feature film (themed similarly to ’ "Yellow Submarine") "Good Times" in 1967, in which the duo starred. The film was a flop.

Sonny and Cher's career had stalled by 1968, as album sales quickly dried up. Their gentle, easy-listening pop sound and drug-free life had become unpopular in an era becoming increasingly consumed with the that came with the overall evolutionary change in the landscape of American pop culture during the late 1960s.

Sonny and Cher also welcomed their first child, , born on , .

In 1971, Sonny and Cher starred in their first television special, "The Sonny and Cher Nitty Gritty Hour". A mixture of slapstick comedy, skits and live music, the show was a critical success, which led to numerous guest spots on other early 70’s hit television shows.

Sonny and Cher caught the eye of head of programming while guest-hosting on "", and Silverman offered the duo their own variety show. "" debuted in 1971 as a summer replacement series. It returned to primetime later that year and was an immediate hit, quickly reaching the top ten. The show received numerous nominations throughout its initial four seasons on CBS. The duo also revived their recording career, releasing four albums and charting two more top ten hits: "All I Ever Need Is You," and "A Cowboy's Work Is Never Done" (1972).

Sonny and Cher's dialogues were patterned after the successful nightclub routines of and : the happy-go-lucky husband squelched by a tart remark from the unamused wife. The show featured a stock company of zany comedians, including Freeman King, Ted Ziegler, and Murray Langston (later on ""). One sketch satirizing 's detective show "Cannon" and its portly star was so successful that Sonny and Cher staged several follow-ups, with as "Detective Fat." Everybody in these sketches wore wide-waisted "fat suits" (similar to hoop skirts), so Detective Fat "and" his clients "and" his suspects would spend most of the time bumping each other and bouncing across the crowded room.

By the third season of the "Sonny and Cher Comedy Hour" in early 1974, the marriage of Sonny and Cher began to fall apart; the duo separated later that year. Therefore the show also fell apart, while still in the top 10 of the ratings. What followed was a nasty and very public divorce (finalized on ,).

Bono launched his own show, "The Sonny Comedy Revue", in the fall of 1974, retaining the "Sonny and Cher" troupe of comedians and writers. Cher also announced plans to star in a new variety series of her own. Critics, surprisingly, predicted that "Sonny" would be the big winner with a solo comedy vehicle, and didn't hold much hope for Cher's more musical showcase. After only six weeks, however, Sonny's show was abruptly cancelled. The "Cher" show debuted as an elaborate, all-star television special on , featuring , and special guest . and both won Emmy Awards for their appearances as guest-stars a few weeks later, and the series received four additional Emmy nominations that year. The first season ranked in the Top 25 of the year-end ratings.

As a result of the divorce, Sonny and Cher went their separate ways until Cher attended the opening of one of Sonny's restaurants in something of a reconciliation. "The Sonny & Cher Show" returned in 1976, even though they were no longer married (the duo "reunited" with a humorous handshake). After struggling with low ratings through 1977, Sonny and Cher finally parted ways for good. Sonny went on to an acting career and later entered politics, eventually becoming a member of the U.S. House of Representatives, Cher continued a successful singing career.

The couple made two surprise impromptu reunion performances: the first in 1979 on "" and the second in 1987 on "" where they performed their hit song "".

On , , Bono died of injuries after a skiing accident. He was 62 years old. Bono's death came just days after died in a similar accident. Bono's widow, Mary, was elected to fill the remainder Congressional term. She has since been re-elected in her own right. She continues to champion many of her late husband's causes, including the ongoing fight as how to best save the .

Cher gave a tearful at Bono's funeral, after which the attendees sang the song "The Beat Goes On." His final resting place is Desert Memorial Park in nearby , the same cemetery in which was laid to rest later that same year. The epitaph on [http://www.findagrave.com/cgi-bin/fg.cgi?page=gr&GRid=2312 Bono's headstone] reads: "And The Beat Goes On."

Sonny displayed his political interest long before running for Congress. A song he penned on Sonny & Cher's "I Got You Babe" album entitled "The Revolution Kind" contains these lyrics:
"We got a land, that land is free & no one loves it more than me.
"But a man's got a right to talk about what's on his mind.
"That doesn't necessarily mean he's the revolution kind.
"Destruction's near, we heard him moan.
"But I got conclusions of my own
"and I got some kids I have to teach
"that if somebody makes a speech
"and with what he says, you don't agree-
"just let him scream "The land is free!" The NBC-TV sitcom "" referenced Sonny and Cher several times. Sonny Bono was a guest star in one episode as a rival (with ) for Dorothy's () affection in a dream sequence; Sonny made Dorothy sing the chorus to "I Got You Babe" to him over the telephone. In another episode, Dorothy and her mother Sophia () dressed up as Cher and Sonny, respectively, to sing "I Got You Babe" as part of a potential routine for a mother-daughter talent show.

released Sonny & Cher dolls in 1975 based on the popularity of their variety show on television.

* [http://homepages.ihug.com.au/~rickster8/ Behind the Making of Sonny & Cher: Complete Discography & Recording History to 1970]