Chorrillos is a district of the Lima Province in Peru and part of the city of Lima. It gets its name from the Spanish word for "trickle of water". The district was originally founded as San Pedro de los Chorrillos and served as a deluxe beach resort until the late 19th century, when it was almost completely destroyed by Chilean forces during the War of the Pacific.

The current mayor of Chorrilos is Augusto Miyashiro Yamashiro.

The district has a total land area of 38.94 km². Its administrative center is located 37 meters above sea level. 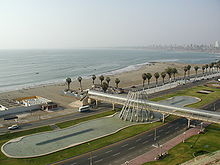 View of the Chorrilos coastal area

It is famous for its beach resorts at La Herradura, its restaurants, particularly the picanterías (specialising in spicy dishes).

A planetarium (planetario) is located here, built on the historical Morro Solar. From Chorrillos, you can also enjoy a panoramic view of the bay of Lima and out to La Punta (Spanish for point, headland) and the San Lorenzo Island in Callao.

The only natural protected area in metropolitan Lima, the Pantanos de Villa Reserved Zone, is located in Chorrillos.

View of the Morro Solar

The area around the Morro Solar was once a pre-Columbian town known as Armatambo. Following the Spanish conquest of Peru, however, the hillside settlement was abandoned (no trace of it remains today due to neglect and willful destruction) and forgotten, as the Indians began to move down to shore. The resulting town of San Pedro de los Chorrillos was officially established as the District of Chorrillos on January 2, 1857.

The district's territory was the setting of important episodes in the War of the Pacific against Chile (1879–1883). The so called Battle of Chorrillos took place in the fields of San Juan, about 7 miles away from the town on January 13, 1881; but after the battle, the Chilean soldiers looted, sacked and set fire to the town of Chorrillos, raped the women and killed many civilians, including foreigners, children and women. There is a nameplate inside the Fire Station that remembers the names of the Italian firemen who were executed by a Chilean fire squad for attempting to put out the fires and save the civilian population. From republican times, only a select group of the large old houses have survived, as the majority were destroyed by Chilean invaders.

Famous Peru national football team midfielder Roberto Palacios grew up in Chorrillos, and that is why he is nicknamed El Chorrillano.

The Taekwondo Pan American Champion of Peru, Jean Carlos Gamarra grew up in Chorrillos and founded a Community Taekwondo Program for the impoverished children of "Delicias," a poor neighborhood of the district. His community program has gained the attention of Mayor Augusto Miyashiro and the Federación Deportiva Peruana de Taekwondo in the past.

The Afro-Peruvian singer Susana Baca is from Chorrillos.

The fisherman José Olaya (José Silverio Olaya Balandra), (1782 - †1823), martyr during the struggle for independence and national hero, was born in Chorrillos.

The former Minister of Education Ramón Miranda Ampuero was born there. 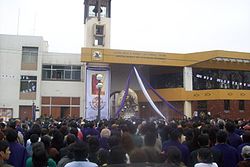