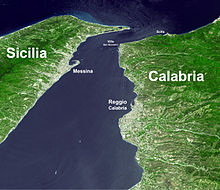 The Strait of Messina Bridge is a long-planned suspension bridge across the Strait of Messina, a narrow section of water between the eastern tip of Sicily and the southern tip of mainland Italy. In 2006, under Prime Minister Romano Prodi the project was cancelled.[1] However, on 6 March 2009, as part of a massive new public works programme, Silvio Berlusconi's government announced that construction of the Messina Bridge would indeed go ahead, pledging €1.3 billion as a contribution to the bridge's total cost, estimated at €6.1 billion.[2] If completed, the bridge will be the largest suspension bridge in the world, almost doubling the main span of the Akashi-Kaikyo. The bridge is part of the Line 1 of Trans-European Transport Networks (TEN-T).

The idea for a bridge spanning the strait has been around since Roman times. A design for a restrained buoyant submarine tube tunnel, that would have been anchored to the seabed,[3] was submitted by British engineer Alan Grant in an international competition promoted by the Italian government in 1970. This was awarded one of six equal first prizes.

View from Messina across the strait onto the tip of the boot of mainland Italy.

The Strait of Messina is a funnel-shaped arm of sea that connects the Ionian Sea in the south to the Tyrrhenian Sea to the north. The width of the strait varies from a maximum of approximately 16 km (9.9 miles) (between Capo d'Alì in Sicily and Punta Pellaro in Calabria) to a minimum of approximately 3 km (1.9 miles) between Capo Peloro in Sicily and Torre Cavallo in Calabria.[4] A similar distance separates Pezzo and Ganzirri; at that point, the strait is only 72 m (236 ft) deep, while in other places it can reach 200 m (660 ft) deep. It is also characterised by strong currents.

The Romans considered building a bridge joining Calabria and Sicily made of boats and barrels. Charlemagne considered joining the two sides with a series of bridges. This idea was revived by the Norman adventurer Robert Guiscard in the 11th century and by Roger II of Sicily in the 12th century. In 1876, Giuseppe Zanardelli was convinced that the strait could be linked by either a bridge or a tunnel. In 1866, public works minister Stefano Jacini gave Alfredo Cottrau, an internationally recognised engineer, the task of drawing up plans for a bridge between Calabria and Sicily. Later, in 1870, Navone proposed building a tunnel based on Napoleon's idea of a tunnel under the English Channel. This tunnel was to start at Contesse and was to pass below Messina and Ganzirri at a depth of 150 m, crossing the Strait to Punta Pezzo and resurfacing at Torre Cavallo.

A geologic study of the area of the Strait of Messina was published in 1909 (historical Arch. Sicilian year XXXIV f.1,2) and in 1921, a study of an undersea tunnel was released to the Geographic Conference of Florence. A group of railway civil engineers studied the possibility of a suspension bridge but nothing came of it. The idea was revived in the 1953 by master bridge builder David B. Steinman with a plan to build a bridge that crossed the Strait using two 220 m (720 ft) towers sunk in 120 m (390 ft) deep waters. The proposed 1,524 m (5,000 ft) span would have represented a world record, eclipsing the then-longest 1,275 m (4,183 ft) centre span of the Golden Gate Bridge and beating the 2,256 m (7,402 ft) Mackinac Straits Bridge (then in planning) with a total length of 2,988 m (9,803 ft). The proposed structure would have cleared the sea by 50 m (160 ft) to allow shipping passage, and to have had two decks, the lower to carry two rail lines, and 7 m (23 ft) above, a road deck 30 m (98 ft) wide. The main cables would have been 1 m (39 in) diameter. The bridge would have required 12,000 workers and cost hundreds of billions of lire. 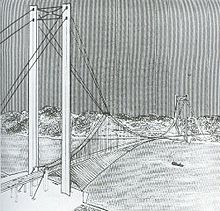 Musmeci's winning proposal for the 1969 contest.

Cross-sectional diagram of the Strait of Messina Bridge

Plans called for six traffic lanes (two driving lanes and one emergency lane in each direction), two railway tracks and two pedestrian lanes. In order to provide a minimum vertical clearance for navigation of 65 m (213 ft), the height of the two towers was to be 382.6 m (1,255 ft). This would have been taller than the Millau Viaduct in France (currently the tallest bridge in the world at 341 m (1,119 ft)). The bridge's suspension system would have relied on two pairs of steel cables, each with a diameter of 1.24 m (49 in) and a total length, between the anchor blocks, of 5,300 m (17,400 ft).

The design included 20.3 km (12.6 miles) of road links and 19.8 km (12.3 miles) of railway links to the bridge. On the mainland, the bridge was to connect to the new stretch of the Salerno-Reggio Calabria motorway (A3) and to the planned Naples-Reggio Calabria High-Speed railway line; on the Sicilian side, to the Messina-Catania (A18) and Messina-Palermo (A20) motorways as well as the new Messina railway station (to be built by Rete Ferroviaria Italiana).

Geographically, the bridge was planned to connect Reggio Calabria to Messina, the two cities which face each other on either side of the strait and form a single city. This ambitious urban project was called Area Metropolitana integrata dello Stretto (Integrated Metropolitan Area of the Strait) or simply Città dello Stretto (City of the Strait). Among the controversies surrounding the building of the bridge was strong opposition to the formation of the new city by various Sicilian nationalist groups.

A construction consortium led by Impregilo S.p.A. was chosen in 2005, with actual construction set to begin in the second half of 2006. The bridge was designed by Danish architects at Dissing+Weitling in close collaboration with the Danish engineering firm COWI.

On 27 March 2006, Impregilo and Stretto di Messina announced that they had signed a contract assigning final project planning to a General Contractor. Impregilo S.p.A., the lead partner had a 45% share. Other participants were Spain’s Sacyr S.A. (18.70%), the Italian companies Società Italiana per Condotte D’Acqua S.p.A. (15%) and Cooperativa Muratori & Cementisti-C.M.C. of Ravenna (13%), Japan’s Ishikawajima-Harima Heavy Industries Co. Ltd. (6.30%), and Consorzio Stabile A.C.I. S.c.p.a (2%). The General Contractor would also be assisted by the Danish and Canadian companies COWI A/S, Sund & Baelt A/S and Buckland & Taylor Ltd., who would handle project engineering. Completion was projected to take six years, at a projected cost of €3.9 billion. The first task of the General Contractor was to draw up the final project.[5]

On 12 October 2006, the Italian Parliament voted 272 to 232 in favour of abandoning the plan due to the bridge's "doubtful usefulness and viability," as well as the inability of the already burdened Italian treasury to bear its share of the cost. Additionally, transport minister Alessandro Bianchi pointed out that the road and rail links leading to the location of the proposed bridge are not capable of supporting enough traffic to make the bridge profitable. Other reasons for abandoning the plan were earthquake risk, and fears that much of the funds would be diverted to the criminal organisations Cosa Nostra and Ndrangheta.[1][6]

On 15 April 2008 Silvio Berlusconi was re-elected prime minister of Italy and vowed to restart the project to build the bridge.[7] The following month, Altero Matteoli, Italy's minister of infrastructure and transport confirmed the government's intent to restart work on the bridge in a letter to Pietro Ciucci, the president of Società Stretto di Messina.[8] 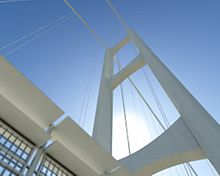 The updated version of the planned bridge (2010).

On 6 March 2009, as part of a massive new public works programme, Silvio Berlusconi's government announced that plans to construct the Messina bridge had been revived, pledging €1.3 billion for the bridge as a contribution to its estimated cost of €6.1 billion euros.

Some 3,300 m (10,800 ft) long and 60 m (200 ft) wide, the bridge would be supported by two 382 m (1,253 ft) pillars, each higher than the Empire State Building in New York. There would be two motorway lanes and one emergency lane in each direction catering for 6,000 vehicles per hour, a double track railway for up to 200 trains a day and two independent lanes for service traffic and pedestrians.[9]

Berlusconi believes work will be completed by 2016.[10]

Until 2006, when the project was halted, the work had been assigned to a consortium of Italy's Impregilo, Condotte d'Acqua, Cooperativa Muratori & Cementisti (CMC), and Consorzio Stabile A.C.I., alongside Spain's Sacyr Vallehermoso, and Japan's Ishikawajima-Harima Heavy Industries.[11]

On 23 December 2009, preparatory work started with the diversion of the Tyrrhenian railway at Cannitello on the Italian mainland side of the strait.[12]

Supporters see the bridge as a huge job-creation scheme and a boost for tourism. However, many also question the priority of the bridge, claiming that if the government concentrated instead on making Sicily's roads more efficient, drivers would be able to reach the coast more quickly at a fraction of the bridge's cost.[13]

Others believe that the bridge is quite unnecessary, since the local economy is already providing for the conversion of a local former NATO airport into a commercial terminal to export vegetables to Northern Europe. Alternatively, a much cheaper revamping of the current structures is claimed to be sufficient (for instance, the ferry lines on the Calabria side are now accessible by trucks only by driving through very narrow streets, which are a tight bottleneck for transport). Another argument against the bridge is the poor state of the transport infrastructure in Sicily, particularly the railroad and Autostrada A20 linking Messina to Palermo, and poor state of the Autostrada A3 on the mainland linking Reggio Calabria to Naples.

There are also concerns about the environmental impact of the bridge, its actual feasibility, and whether it could resist earthquakes, which are not uncommon in the region.