Chain crew
Not to be confused with chain gang. 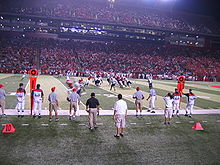 The chain crew at work during a Rutgers Scarlet Knights football game. 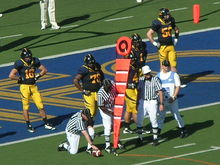 A first down measurement during a game between the USC Trojans and the California Golden Bears.

The down indicator box is a pole with a sign indicating what the current down is. Before every play from scrimmage, it is placed on the sideline to mark the current line of scrimmage.

The first down measuring chain is used to measure the yards that the offensive team needs to gain a first down. It is a 10-yard metal chain with poles attached to each end. The poles, usually called "the sticks", are almost always covered in bright orange padding.

When a team gains a first down, one of the rod men places one end of the chain on the sideline parallel to the spot of the ball. The other rod man then stretches the chain out to mark the first down line. To ensure an accurate measurement, a clip is usually attached to the chain on the closest 5-yard mark on the field.[1]

For professional and college football games, an auxiliary chain crew operates on the opposite side of the field. Here, another "stick" and down indicator box is used so that players and officials can also look at the other side of the field to know where the first down line and the line of scrimmage is, respectively. The auxiliary chain crew also includes the drive start indicator, which is placed at the beginning of a team's drive and stays there until they lose possession. This indicator is only used for statistical purposes to calculate the distance of each drive. It looks similar to a "stick", but it has an arrow (or occasionally a large "X") that points in the direction the offensive team is going.

Members of the chain crew are usually picked by the offices of the home team instead of the league or conference that they play in.

All levels of football are believed to currently use the chain crew. One notable exception was the World Football League of 1974 to 1975, which used a proprietary device called the "dicker-rod," a 90-inch stick that allowed measurements to be made with one person instead of three. The dicker-rod never saw any usage outside the WFL.