Greece has diplomatic relations with almost all the countries in the world, as shown in the map below.

Greece continues to reject the use of the name Macedonia or Republic of Macedonia to refer to the country.[2] The country opposes the use of the name without any qualification such as 'Republic of Northern Macedonia' to the post-1991 constitutional name of its northern neighbour,[2] citing historical and territorial concerns resulting from the ambiguity between the terms Republic of Macedonia, the Greek region of Macedonia and the ancient kingdom of Macedon,[2] which falls within Greek Macedonia. Greece also objects to the use of the terms "Macedonian" to denote ethnic Macedonians and the Macedonian language,[2] as these terms have a different meaning in Greece (inhabitants of the Greek region of Macedonia and the Macedonian dialect of Greek). The dispute has escalated to the highest level of international mediation, involving numerous attempts to achieve a resolution, notably by the United Nations.

The provisional reference the former Yugoslav Republic of Macedonia (fYROM)[3] is still currently used in relations involving states which do not recognise the constitutional name, Republic of Macedonia. Nevertheless, all United Nations member-states have agreed to accept any final agreement resulting from negotiations between the two countries. The ongoing dispute has not prevented the two countries from enjoying close trade links and investment levels (especially from Greece), but it has generated a great deal of political and academic debate on both sides.

On 13 September 1995 the two countries signed the Interim Accord,[3] whereby Greece recognized the Republic of Macedonia under the provisional UN name of fYROM.[3] As of August 2011 negotiations aimed at resolving the dispute are ongoing. Under Greek pressure, the European Union and NATO agreed that in order for the Republic of Macedonia to receive an invitation to join these institution the name dispute must be resolved first.[4][5][6] This resulted in a case at the International Court of Justice against Greece for violation of the Interim Accord,[7] and a verdict is to be made public in the following months.[8]

After more than a century of strained relations and intercepted fighting Greece and Turkey agreed under the Treaty of Lausanne in 1923 to a population exchange as an attempt to reduce tensions between the two countries in the future. A significant 300,000 strong Greek community in Istanbul and a 100,000 Muslim one in Western Thrace were excluded from the transfer, with each one supposed to be working as counter-weights to any anti-minority policy that either Turkey or Greece may sought to apply in the future. The good relations between the two neighbors lasted until mid-1950s when the Cyprus problem surfaced. In 1955 an anti-Greek Istanbul pogrom was initiated by Turkish mobs against the Greek community of Istanbul, which led to the gradual extinction of the community. Similar policies occurred in the islands of Imbros and Tenedos. Up to late 1990s strained relations almost led to an open war in 1974, 1987 and 1996. Since the earthquake diplomacy in 1999 relations have once again began improving.

Embassy of Greece in Nicosia, Cyprus

As the island of Cyprus was heading towards independence from the United Kingdom the Greek (82%) and Turkish (18%) communities began embroiled to a bitter inter-communal fighting, partly sponsored by the two "motherlands". EOKA-B and the Turkish Resistance Organization (TMT) were responsible for many atrocities which resulted in cementing tensions and led to total isolation of the communities with Turkish Cypriots withdrawn into enclaves. In 1974 the US-backed Greek junta - in power since 1967 - partly in a move to draw attention away from internal turmoil and partly unsatisfied with Makarios' policy in Cyprus, on 13 July attempted a coup to replace him with Nikos Sampson and declare union with Greece. Seven days later, Turkey launched an invasion of Cyprus allegedly to reinstate the constitution but which resulted in blooded conflict, partition of the island and mass ethnic cleansing. The overwhelming Turkish land, naval and air superiority against island's weak defenses led to the bringing of 37% of the land under Turkish control. 170,000 Greek Cypriots were evicted from their homes in the north with 50,000 Turks following the opposite path concluding the de facto division of Cyprus. In 1983 Turkish Cypriots proclaimed independence unilaterally with only Turkey recognizing them. As of today the north is under an embargo as a measure against the illegal partition of the island.

Ever since both countries along with the two communities of the island are engages into a vicious cycle of negotiations which led to little. In 2004 the Annan Plan for Cyprus was put to vote but whilst it was accepted by the north, it was rejected by the Greek-Cypriots as it meant in their eyes, endorsing a confederal state with a weak central government and considerable local autonomy. The Republic of Cyprus is a constitutional democracy which has reached great levels of prosperity, with a booming economy and good infrastructures, part of the United Nations, European Union and several others organizations by whom it is recognized as the sole legitimate government of the whole island.

Greece calls for the removal of Turkish troops from Cyprus and the restoration of a unified state. The Republic of Cyprus is receiving strong support from Greece in international forums with the latter maintaining a military contingent on the island, and Greek officers filling key positions in the Cypriot National Guard.

Other issues dividing Greece and Turkey involve the delimitation of the continental shelf in the Aegean Sea, territorial waters and airspace. In March 1987 a dispute concerning oil drilling rights, almost led to war between the countries with Greece advocating the dispute to be decided by the International Court of Justice. In early 1988, the Turkish and Greek Prime Ministers met at Davos, Switzerland, and later in Brussels. They agreed on various measures to reduce bilateral tensions and to encourage cooperation.

Tensions over the Aegean Sea surfaced again in November 1994, when Greece claimed under the Law of the Sea Treaty states, which Turkey has not signed, that it reserved the right to declare an expansion of its continental shelf from 6 to 12 nautical miles (11–22 km; 7–14 mi) around its Aegean islands. Turkey which has itself expanded its continental shelf in the Black Sea shore, stated that it would consider any such action a cause for war. New technical-level bilateral discussions began in 1994 but soon fizzled-out.

In January 1996, Greece and Turkey came close to an armed confrontation over the question of which country had sovereignty over an islet in the Aegean. In July 1997, on the sidelines of the North Atlantic Treaty Organization (NATO) summit in Madrid, Greek and Turkish leaders reached agreement on six principles to govern their bilateral relations. Within a few months, however, the two countries were again at odds over Aegean airspace and sovereignty issues. Tensions remained high for months, although various confidence-building measures were discussed to reduce the risk of military accidents or conflict in the Aegean, under the auspices of the NATO Secretary General.

Turkey and the EU

Main article: Accession of Turkey to the European Union

Greece has come out in support of Turkey's bid for European Union membership,[9] and supports its full integration to the union when conditions for its acceptance are met. On 6 May 2004, Turkey's Prime Minister Recep Tayyip Erdoğan became the first Turkish leader to visit Greece in fifty years.[10] On 24 January 2008, Greece's premier Costas Karamanlis visited Turkey a full 48 years after the last Greek premier and uncle of his Constantine Karamanlis had visited the neighboring country.

Greece has a special interest in the Middle East and North Africa because of its geographic position and its economic and historic ties to the area. The country cooperated with allied forces during the 1990-1991 Gulf War. Since 1994, Greece has signed defense cooperation agreements with Israel and Egypt and in recent years, Greek leaders have made numerous trips to the region in order to strengthen bilateral ties and encourage the Middle East Peace Process. In July 1997, December 1997, and July 1998 Greece hosted meetings of Israeli and Palestinian politicians to contribute to the peace process. Greece also maintains diplomatic relations with the General Palestinian Delegation while enjoying cordial relations with Syria.

Greece enjoys close historic relations with many members of the African Union, such as South Africa, Sudan, and Ethiopia. 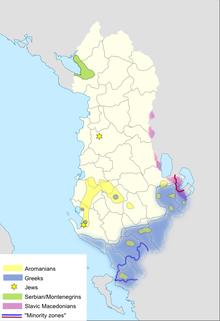 Map of the traditional Greek presence in Northern Epirus (in blue).

Northern Epirus is the name used generally by Greeks to refer to the southern part of Albania, home to a Greek minority[74] which after 1989 keeps reducing due to immigration to Greece. The Greek minority was subject to oppression and harassment during Enver Hoxha's communist rule and along with the rest of Albanians was hit hardly by the isolation that the regime imposed and from the economic hardship that followed the fall of communism as well. The treatment of the minority by the Albanian government is strongly linked with the status of Greco-Albanian relations. The Greek minority is organized under the Unity for Human Rights Party which is the continuation of the former banned party called "Omonoia" (Unity in Greek) and has since 1997 joined the Socialist coalition. At the last elections the Greek minority party received 4,1% of the vote and two seats in parliament. The party leader is Vangjel Dule, while party member Vasilis Bolanos is the current mayor of the town of Himara. The party is represented in the ELDR group in the Council of Europe. Strong Greek presence exists in Gjirokastër (Argyrocastro), Korçë (Korytsa), Sarandë (Ag.Saranta), Himara (Xeimara) and the nearby areas. The former CIA director George J. Tenet, Pyrros Dimas, Sotiris Ninis and former Greek president Kostis Stefanopoulos have ancestral links to the Greek minority. 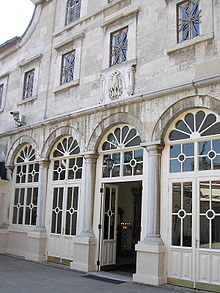 The entrance of the Patriarchal Cathedral of St. George in the Phanar district.

The Ecumenical Patriarchate of Constantinople, protected under the treaty of Lausanne is a point of controversy between Greece and Turkey as the latter refuses to recognize the Ecumenical character of the Patriarchate thus requiring the Patriarch himself to be a Turkish citizen. Moreover the biggest part of the Patriarchate's property - known as Vakoufia - had been confiscated by Turkish authorities and the Theological school of Halki which is the traditional school out of which the Eastern Orthodox Church, draws its clergy is closed since 1971. To no avail numerous Greek, European Union and USA officials have criticized Turkey's attitude and even president Bill Clinton during his visit in Greece asked for the theological school to open. During Greek prime-minister's Kostas Karamanlis historic visit to Turkey in 2007, Recep Tayyip Erdogan promised to reconsider his country's stance on the matter.

The Black Sea is a region heavily colonized by Greeks throughout history and used to have a heavy presence of Greek population up to the population exchange between Greece and Turkey in 1923. Nowadays there is still Greek presence in the shores of Black Sea mainly in Mariupol (Ukraine), Crimea, Russia and Georgia despite immigration to Greece after the dissolution of Soviet Union. Today Greeks in the region are estimated to be around 215,000 according to official Greek diaspora figures. Greece is a founding member of the Organization of the Black Sea Economic Cooperation.

Greece is a major participant in most large scale international bodies, with the geographic significance of the region proving advantageous for diplomatic, trade and political crossroads.