Demolition derby
For the song of the same name by Quiet Riot, see Quiet Riot (1977 album). 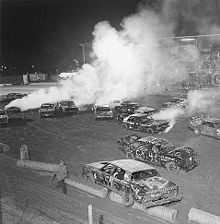 Competition at the West End Fair Demolition Derby, Gilbert, Pennsylvania. This annual event is held on three successive nights each August, with approximately 100 automobiles entered each night. Attendance at the event ranges from 2,000-4,000 spectators.

Demolition derby is a motorsport usually presented at county fairs and festivals. While rules vary from event to event, the typical demolition derby event consists of five or more drivers competing by deliberately ramming their vehicles into one another.[1] The last driver whose vehicle is still operational is awarded the victory.[1]

Demolition derbies originated in the United States and quickly spread to other western nations. In Europe, this type of event is called banger racing, although in a demolition derby racers do not race against each other, instead aiming specifically to destroy the other cars.

Demolition derbies can be very dangerous. Although serious injuries are rare, they do happen.[1] Drivers are typically required to sign a waiver to release the promoter of an event from liability.[1] To make the event safer, all glass is removed from the vehicle, and deliberately ramming the driver's-side door area is forbidden.[2] The driver's door is often required to be painted white with black numbers or blaze orange, or with contrasting colors, for visibility.[3][4] Most demolition derbies are held on dirt tracks,[1] or in open fields, that are usually soaked with water. This causes the competition area to become muddy, which in turn helps to further slow the vehicles. Some drivers use both the front and rear of the vehicle to ram the other competitors. Others tend to use only the rear end of the vehicle, to help protect the engine compartment from damage.[5] 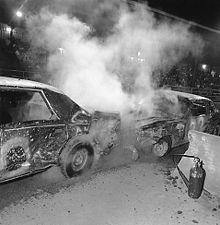 Sometimes the action unintentionally spills out of the "crash zone" boundaries. Note the fire extinguisher conveniently placed for easy access. Many derbies have local firefighting crews standing by in the arena.

The sports popularity peaked in the 1970s.[1] By the 1980s, the sport's popularity began to level off,[1] and then possibly decline throughout the 1990s. With the demise of Wide World of Sports, television exposure became virtually non-existent. In addition to safety concerns and the shortage of full-size vehicles, some felt that the sport has shown little change or innovation beyond its original premise of giant lumbering cars sloshing through mud.

In 1997, The Nashville Network (later part of CBS) returned demolition derby to national television in its "TNN's Motor Madness" series of various motor-sport events.[1] The demolition derby was originally designed to serve as an amusement while attendees bought food and beverage from concessions. Motor Madness derbies were primarily for broadcast and needed to fit into a time frame. Live demolition derbies could last as long as possible. Motor Madness changed the rules from last car running to largest number of offensive hits in a time frame. However, as part of MTV Networks' takeover of CBS Cable operations in 2000, demolition derbies, as well as the rest of the CBS motor-sports operations, were removed from programming as part of MTV's move to shut down the CBS Charlotte operation based at Lowe's Motor Speedway and generalize the network into a more broadly viewed channel. Pay per view was demolition derby's only national television outlet in the new millennium. Two $50,000-to-win derbies were held in Widewater, Canada from 2000-2001.

Later in the 2000s, a proliferation of cable television shows about vehicle customizing occasionally showcased junked vehicles in bizarre competitions. Spike TV's "Carpocalypse" [1] was a reality documentary series on variations of demolition derby filmed in Orlando, Florida. The Speed Channel also has aired Team demolition derbies in 2005. Cable TV's exposure has led to renewed interest in the demolition derby.

In 2006 the partners of Mike Weatherford Promotions (Mike Weatherford and Dustin Swayne) brought DerbyMadness.com to life while promoting the NAPA Auto Parts Crash for Cash Series. The First Annual final show paid out $5,000.00 to the winner of the series. To compete in the final show, derby drivers across several states had to first qualify at any one of the participating NAPA Crash for Cash qualifying derbys. There were over 100 cars in the final show. The Series was a huge success and continues to grow every year. The 2007 Series Money was doubled, so competition is expected to increase for the 2008 series.

In 2011, the UK witnessed its first ever demolition derby. The event took place at Old Trafford Football Ground, Stretford, on Sunday 23rd October, but was only received well by a small section of the crowd. 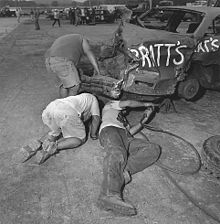 Pit crews have to work together efficiently in order to repair heat winning cars so they can return to compete in the feature event. Most derbies require that the same car qualifying in the heat must be used in the feature. Occasionally, some derbies allow heat winners to use a fresh car in the feature.

Competitors have traditionally used full-size, American made sedans, and station wagons, especially those from the 1960s and 70s,[1] which were larger, heavier, and had more robust frames than later full-size vehicles. The 1964-1966 Chrysler Imperial achieved near-legendary status for its crashworthiness, and is still banned from most derby events.[4][7] Scrap vehicles are purchased from junkyards and private owners,[1] usually for less than US$500, though some select (and rust-free) mid-1970s sedans, and station wagons, may go for more than $1,000. A vehicle may be patched up and re-used for several events.

With the dwindling availability of these older vehicles, smaller full-sized vehicles of the 1980s and 1990s are more frequently encountered today. A separate class of demolition derby for compact cars is increasing in popularity. Compact car events have the advantages of an abundant supply of usable vehicles, which also tend to be more mobile and thus, more entertaining to fans. Being largely front-wheel drive, their back ends can sustain considerable amounts of damage before the vehicle is immobilized. However, this increased speed, coupled with the fact that compact cars tend to be less crashworthy, makes injuries more frequent.

Other versions of the sport using combine harvesters, and lawn mowers have been practiced in various parts of the world. Larger vehicles, such as pickup trucks and SUV's were rarely used in demolition derby[2] (though school bus demolitions have long been a popular exception), but have recently become popular in demolition events. Recently a new class for minivans has been added to some derbies because of the abundance of older vehicles.

The vehicles are stripped of interior fixtures, trim, plastic, lights, and glass.[4] They are repainted, often in loud, garish designs and low budgets (spray paint is frequently used to mark names, slogans and identification). The driver's side door is usually painted a distinct white color, to allow the other drivers to avoid it and to allow numbering. Additional modifications include trimming sheet metal from around the wheel wells, removing parts of bumpers, welding the doors shut, and relocating the battery and gas tank.[5] The radiator is sometimes relocated to the back seat. To make the cars last longer, they are occasionally pre-bent, frames notched, rear bumper removed, trunk lid notched, and rear coil springs are (when rules allow) replaced with leaf springs. In many instances, roll bars, fire extinguishers, and other safety equipment is installed.[5] Sometimes the removed parts create bulk availability of off-color parts for older cars that are compatible with them. In most cases, any vehicle parts must be "stock," though in some derbies a "gladiator" or "outlaw" division allows cars to be extensively modified and reinforced.[8]

In 2001, the Los Angeles Times estimated that between 60,000 and 75,000 drivers participated in at least one of the 2,000 demolition derbies held in the United States that year.[1] Event purses rose from hundreds of dollars to over $10,000 after the popularity of TNN's Motor Madness series.[1]

Derbies frequently have few rules, with most regulation focusing on the cars' composition and not on the actual action on the track.[1] Drivers are often required to be at least 16 years old. They are usually required to have seat belt and a helmet.[1] An event begins with drivers lined up on a dirt oval with their tail lights facing each other.[1] They begin in reverse and starting crashing into each other.[1] Drivers are usually required to crash into another vehicle every 2 minutes or they are labeled as "sandbagging" and become disqualified.[1] The last running car wins the event;[1] in order to speed up the end of a particular event, some derbies will require the last two cars running to make all hits from that point forward head-to-head, making contact only with the front ends. An event typically takes about 20 minutes.[1] Depending on the sanctioning body, it may be illegal for multiple cars to collaborate and gang up on opposing cars in a sandwich effort, and could result in disqualification for both parties that do so; the enforcement of this rule varies widely. 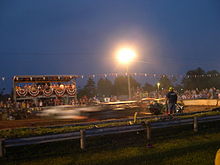 A demolition derby under way at the Greenwich, Ohio Firemen's Festival, 2005

Also included at many demolition derbies in the US and UK are rollover competitions, where the object is to drive a car so that only the wheels on one side hit a ramp, causing the vehicle to roll over repeatedly. Drivers take multiple runs at the ramp until their vehicle dies. The driver who completes the most rollovers before their vehicle ceases to function is declared the winner. Compact cars, especially hatchbacks, are used in rollover competitions. Their lighter weight enables them to roll more easily than larger vehicles. However, with modern high-horsepower unibody sedans and coupes now appearing on salvage lots, some of this conventional wisdom is being questioned and some major competitions have been won by drivers of mid-size and full-size sedans.

Various classes of vehicles have competitions staged on figure 8 shaped tracks. Bump To Pass Figure eights are also quite popular as they involve less prep work from the usual figure eight racer which usually can also race as an oval track street stock. Demolition derby vehicles - especially school buses - often compete on figure 8 tracks. The best known figure 8 track in the US is Riverhead Raceway in Riverhead, New York.