Moston is a district of Manchester, in North West England, approximately 3 miles (5 km) north east of the city centre. Historically a part of Lancashire, Moston is a predominantly residential area, with a population of about 12,500 and covering approximately 1,300 acres (5.3 km2).

The name Moston may derive from the Old English words moss and ton, where moss usually referred to a place that was mossy, marshy or peat bog, and ton signified a town or settlement. The area of White Moss still retains these characteristics.

Historical records of Moston date back as far as 1301 where the earliest historical archives are of a charter from the Lord of the manor of Manchester, Thomas Grelle.[1]

Although in 1320 Moston was called a hamlet of Manchester, in some deeds is it spoken of as lying within the township and parish of Ashton-under-Lyne. That the lords of Ashton had in early times rights in Moston also is shown by a fine of 1195, from which it appears that on a division Robert son of Bernard had Moston.[2]

By the 14th century, Moston consisted of both untamed countryside and agricultural settlements. In the 16th century the area saw the introduction of the linen treatment industry, with the washing and bleaching of the fabric boosting the economy throughout the area. Moston went on to become an integral part of the northern sector of Cottonopolis during the 18th and 19th centuries.

The Moston Mill Print Works, which was on the junction of Williams Road and St Mary’s Road, closed in 1848. Spring Valley Dye Works was sited in the area to the west to what is currently known as Lancaster Club. Extracting sand and clay from the local pits was another important industry alongside the brick works in Newton Heath. The area around Belgrave Road is known to local residents as the "White Stuff" or the "White Hills", in reference to the brickworks’ waste that formed steep and unstable hills alongside the brook. These hills were reprofiled during landscaping works carried out in the early 1980s.

Increased population levels in the area resulted in the need for an increased number of residential developments.[3]

Moston was incorporated into the city of Manchester in 1890, along with neighbouring Blackley and ceased to be a township in 1896, when it became part of the new township of North Manchester.

The town is incorporated into the parliamentary constituency of Manchester Blackley. This seat is currently held by Graham Stringer MP of the Labour Party and is considered a political safe seat, having been continuously held by the party since 1964. Moston is represented in the Manchester City Council by the three Labour councillors of Henry Cooper, Paul Murphy and Rita Tavernor.[4]

Moston is located above the midpoint of the Greater Manchester Urban Area, 3.2 miles (5.1 km) north east of Manchester city centre. To the north, Moston is bordered by Blackley, to the west by Harpurhey, to the east by Failsworth and by Newton Heath and Monsall to the south.

The town is built on a mixture of Bunter sandstone and Manchester marl (clay) that is Permo-Triassic in origin. The area is underlain with middle coal measures (mainly Carboniferous Westphalian B).

During the search for mineral deposits, geologists descovered that there was a geological fault (known as the Moston Fault) which runs between Clayton Bridge and Alkrington.[5]

Broadhurst Park was opened in the 19th century and provides a range of activity opportunities and community events, including football. The park provides green space within the Irk Valley corridor. Broadhurst Park and Field stage summer funfairs, an annual bonfire and firework display and summer sports activities for children.

The majority of the site is open grassland and includes a landscaped area. The north of the park is home to recreation and community events, while the south contains woodland.

Recent drainage improvements to the football fields have greatly increased the biodiversity significance of the neighbouring Broadhurst Clough area, where the open water is home to a wide range of wildlife.[6]

Nuthurst Park is a community park located on Nuthurst Road and has a children's playground, 5-a-side pitch, tennis court and basketball courts.[7]

Hough Hall is the oldest building in the Moston area and is situated on Hough Hall Road. The Hall was listed as a Grade II listed building on 3 October 1974[8] and was erected in approximately the 16th-17th centuries.[9] 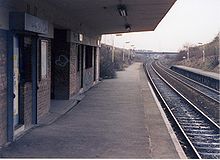 Moston railway station is an unmanned railway station and is located off Hollinwood Avenue in New Moston. Since the closure of the Oldham Loop Line in 2009, all trains calling at the station are on the Caldervale route managed by Northern Rail.

The road links in the area allow for easy transit to all of the surrounding districts and cities with the main thoroughfares being Broadway which is technically part of New Moston, Lightbowne Road and Victoria Avenue. The M60 is an orbital motorway which surrounds the majority of the Greater Manchester and access can be gained onto it via Junction 21 on Broadway. 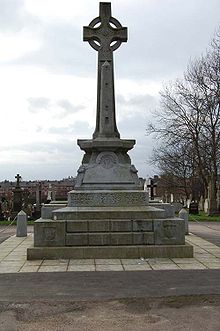 The monument in St Joseph's Cemetery in memory of the Manchester Martyrs.

St Joseph's Cemetery (commonly known as Moston Cemetery) which opened in 1875, stretches out over a wide sloping site and is one of Manchester's principal Roman Catholic cemeteries.[32]

The Alexian Brothers Care Centre is a dual registered care home providing long-term care for older people requiring residential support and nursing care. The current building was completed in 1992 to replace the original hospital of the Alexian Brothers. The home is set within mature gardens in a secure, gated development.

The Alexian Brothers is a religious institute, originating in Belgium in the 14th century and has been closely involved with care of the elderly in the local community since first settling in Manchester in 1875. This work has continued on the same site in Moston since 1884.

The Hospital Management Trust assumed responsibility for the operational management of the Care Centre in January 2006 in response to the Brothers need to step back from front line management. In line with the objectives of The Hospital Management Trust, the Care Centre aims to provide the very best in terms of nursing and residential care. The emphasis is to ensure that the care residents receive meets the standards which everyone would wish for their own families and closest friends.[33][34]

Moston Brook AFC is an amateur football club which was formed in 1969 as an 'Old Boys' team to be made up of former pupils from Moston Brook High school, although the school was closed August 2000.[37]

Moston Valley FC was established in 2002 and became an FA Charter Standard Club in 2005. The Club is staffed by qualified coaches and managers who are CRB checked regularly and have Child Protection and First Aid Certification. The teams range from under 8's up to under 16's and all play in a variety of leagues around Manchester.[38]

The Fitness First chain have a gym located on Victoria Avenue East with a Cardio Theatre, Spinning Room and other exercise facilities.[40]

Policing in Moston is provided by Greater Manchester Police. A part time station is located in Harpurhey on Moston Lane and is under the command of North Manchester (A) Division.

New Moston Library is located on Nuthurst Road in New Moston and aside from stocking books there are a vast number of other services and activities organised there. A T'ai chi club, the Moston Midwifery Group children's groups, Parent and Carer Information point, Health Information point and T'ai chi club use the site as a base.[42]

Waste management is co-ordinated by the local authority via the North Manchester Household Waste and Recycling Centre.[43]

Local Moston celebrities include television historian Michael Wood, social reformer and political reformer Samuel Bamford, actress Marsha Thomason who has found fame in such US shows as Las Vegas and Lost, the noted educationist Francis Smyth and Pete Mitchell from XFM. Kavana is singer and actor.[44]

West Bromwich Albion and England Under 21 footballer, Ishmael Miller, is another notable Moston citizen. The former Manchester City attacking midfielder was known on the terraces as The Moston Menace due to his formidable physique.[45] Another footballer, Charles Broadhurst, was also born in Moston.

Major Henry Kelly VC, MC & Bar was a Moston born officer in the The Duke of Wellington's (West Riding) Regiment who saw action in the First World War. Kelly received his Victoria Cross for his action on the 4 October 1916 at Le Sars, France. He was awarded his Military Cross & Bar for subsequent acts of heroism in the war. After the war, Kelly moved to Ireland and went on to become the chief of staff for overseas operations in the Free State Army.

William Chaderton was born in the district around 1540 and was an English academic and Anglican bishop. He was the Bishop of Chester from 1579 to 1595 and then Bishop of Lincoln from 1595 to 1608 from where he went on to become Warden of Manchester College.[46][47]

Alternative/indie rock bands The Perfect Name and Northside both hail from Moston.

1808 The Grand Orange Order of England was formed in Manchester with Colonel Samual Taylor of Moston as first Grand master.