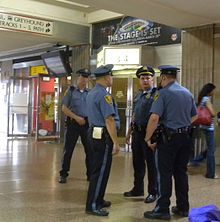 The primary mission of the New Jersey Transit Police Department is to ensure a safe and orderly environment within the transit system, promoting the confidence of the riding public and enhancing the maximum use of the transit system. Their fundamental duty is to safeguard lives and property; protect against deception, intimidation and violence, counter-terrorism;[1] and to uphold, without prejudice, the constitutional rights of all people.

The New Jersey Transit Police Department is the only transit policing agency in the country with statewide authority and jurisdiction. The department was created on January 1, 1983, and it evolved as a result of the passage of the Public Transportation Act of 1979 and subsequent legislation on the state and federal levels. At that time, the original complement included thirty-nine Commissioned Rail Police Officers. On January 12, 1990, NJSA 27:25-15.1 was enacted into law, and it established the New Jersey Transit Police Department as a sworn law enforcement agency with the "general authority, without limitation, to exercise police powers and duties, as provided for police officers and law enforcement officers, in all criminal and traffic matters at all times throughout the State..." The authorized strength of the Department includes 260 sworn officers and 67 non-sworn members (which include Fare Enforcement Inspectors) serving the more than 500,000 commuters who use the NJ Transit system daily. In addition, the New Jersey Transit Police is responsible for policing the Hudson-Bergen Light Rail and the RiverLINE.

Each of the regional commands provide different police services for their geographical area they cover, the different divisions within the department can be categorized as the following,

The NJTPD has the following rank structure, in descending order:

A New Jersey Transit Police K-9 officer and his dog.

One of the primary missions of the New Jersey Transit Police Department is the prevention of terrorism on all of New Jersey Transit's trains and buses. This is especially relevant since the 2004 terrorist attacks of the transit system in Madrid, Spain.

After September 11, 2001, the Essex County Sheriff's Bomb Squad had a tenfold increase in requests for bomb detection. This caused a problem for New Jersey Transit, according to the agency’s then police chief, Mary F. Rabadeau. At Penn Station in Newark, the transit authority had been dependent on the Essex County Sheriff's bomb squad to respond to every bomb threat or suspicious parcel. That disrupted the station, sometimes for hours, having an immense impact on transportation in the area, because the station is host to hundreds of daily Amtrak and New Jersey Transit trains, plus two rapid transit lines and intercity and local buses. The best resource the agency could provide with the most apparent and immediate impact was canine bomb-detection teams. After interviewing people at other agencies that had their own canine bomb-detection squads, New Jersey Transit chose the Essex County Sheriff's Office[2] to train the transit police on New Jersey Transit property—on trains and buses and in stations and other facilities where the teams would be working. The program was fairly inexpensive, using dogs that had washed out of seeing-eye training but were calm and obedient—fine for bomb detection. New Jersey Transit customized three road vehicles so that the teams could operate statewide, presenting themselves without notice. By patrolling Penn Station, the teams have "hardened it as a target and are welcomed by passengers, said Rabadeau". Because a large percentage of bomb alerts turn out to be false, the fast response minimizes disruption to the flow of trains and passengers. The teams also give demonstrations at schools and terminals and provide assistance to other agencies.[3]

During his tenure, former Governor James McGreevy helped dramatically expand the counter-terrorism capabilities of the New Jersey Transit Police. The governor allowed the purchase of a Police Mobile Command Vehicle, which is a 40-foot (12 m) transit bus converted into a mobile response unit for the New Jersey Transit Police Department. The vehicle contains outside phone lines, a fax machine, portable computers and printers, and an on-board radio system with several frequency bands to communicate with other law enforcement agencies, as well as other regional transit agencies. The following measures were also enacted,[4]

The New Jersey Transit Police Department is not without its fair share of problems and criticism. In 2002, a study released by the former New York City Police Commissioner William J. Bratton has concluded that New Jersey Transit's police force is not prepared to handle a terrorist attack. The report said the agency's then 120-member police force lacks the training to protect the 400,000 daily bus and rail commuters. The report, which was completed in the fall of 2001, recommends that the agency should create divisions to monitor troubled train stations and to crack down on fare-beating.[7] The direct response to this was the creation of the Justice Team and an extensive hiring blitz to bring new police officers onto the department. Since the study, the department has considerably added onto its counter-terrorism capability with the creation of many new units and the issuance of better technology to its patrol officers. Each transit police officer is issued a Dosimeter which can be used to measure radiation.[6] 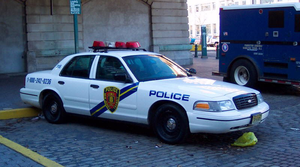 Officers in Special Operations wear a B.D.U. uniform. During special events and training, other members of the department wear B.D.U.'s as well.

As for equipment, the standard sidearm for the department is the SIG P229 chambered in .40 S&W. Transit also utilizes the Remington 870 Police Magnum shotgun, as well as M4 Commando Rifles and Remington 700 Sniper rifles for the Emergency Services Unit officers.[8] 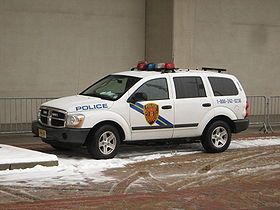 The New Jersey Transit Police Department utilizes many different vehicles in its fleet. Among the used vehicles are Ford Crown Victoria Police Interceptors, Ford Explorers, Dodge Durangos, Chevrolet Tahoes and Chevrolet Suburbans. Transit police officers also ride the buses and railways to provide more direct policing. In addition, the NJTPD has several minibuses outfitted as mobile command centers at strategic locations. The agency recently received in 2011, a Pierce Hybrid Rescue/Pumper truck which is capable of going off road and onto the rails where needed.[9][10][11][12]