Merrick (Gaelic: Mearaig) is the highest mountain in the Southern Uplands of southern Scotland and is part of the Range of the Awful Hand. The shortest route of ascent is from the car park in Glen Trool. The car park is located near Bruces Stane, a monument commemorating the victory of Robert the Bruce over the English forces of Edward II at the Battle of Glen Trool in 1307.

An interesting feature on the mountain is the presence of several large partly buried granite boulders at about 800m on the broad west ridge.[1] These are glacial erratics, though the exact mechanism that has brought them to rest close to the highest point of the Southern Uplands and over 200m higher than any currently occurring granite in the Galloway Hills is unclear.

The Merrick is a relatively straightforward and easy hill walk from the car park near Bruces Stane. The route climbs past the ruined Culsharg bothy then up on to Benyellary. After dropping slightly the final climb to the summit trig-point is made. Be aware that if descending in poor visibility a very common mistake is to walk down the west ridge into remote terrain. The total round-trip distance from Glen Trool to the summit and back is just under 8 miles.

Because of the nature of the rock no good rock climbing has been recorded on the Merrick. However, in winter after a good freeze there are a number of good ice climbs of up to 200 m on the Black Gairy, which lies west of the summit.[2] 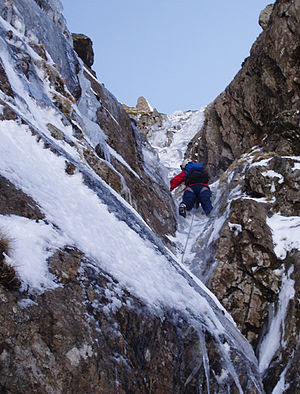