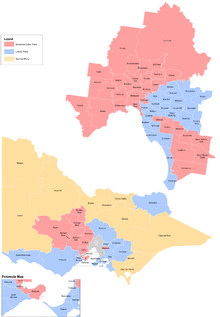 The new Liberal/National government was sworn in on 2 December 2010.[2] Daniel Andrews replaced Brumby as Labor leader on 3 December.[3]

In the 40-member upper house where all members are up for re-election every term, the Coalition won a majority with 21 seats, 16 seats to Labor and 3 to the Greens.[4][5]

Adam Bandt, Brian Walters and Bob Brown of the Greens during the election campaign

The Coalition launched their campaign on 14 November 2010 at the Melbourne Convention and Exhibition Centre in the electoral district of Melbourne, with the slogan: "Fix the problems. Build the future." Labor launched their campaign on 16 November 2010 in the electoral district of Bendigo East, using the slogan: "For the times ahead." The Greens ran with the slogan "This time, I'm voting Green".

The Liberal and National Parties contested the election as a Coalition. They had not done so since the previous agreement lapsed in 2000.[6] The Liberal Party departed from tradition and preferenced the Greens last instead of above Labor. Without Liberal preferences, the chances of the Greens winning up to four inner city seats from Labor were decreased.[7]

Labor led by Steve Bracks came to power as a minority government at the 1999 election, defeating the incumbent Jeff Kennett Liberal/National Coalition government. Labor was returned with a majority government after a landslide win at the 2002 election. Labor was elected for a third term at the 2006 election with a substantial but reduced majority. Labor won 55 of the 88 seats up for election, a decrease of 7, and 54.4 percent of the two-party preferred vote, a decrease of 3.4 percent. Brumby replaced Bracks as Labor leader and Premier of Victoria in 2007.

Between the 2006 and 2010 elections, four by-elections were held; in Bracks' seat of Williamstown and former Deputy Premier John Thwaites' seat of Albert Park in 2007, former minister Andre Haermeyer's seat of Kororoit in 2008, and former minister Lynne Kosky's seat of Altona in 2010. All four seats were retained by Labor. Labor MP Craig Langdon resigned from his seat of Ivanhoe in August 2010, however the by-election writ was discharged by the Parliamentary Speaker due to the proximity of the state election coupled with the cost of holding a by-election.[8]

Terms are fixed at four years. Elections occur in line with the fixed term provisions laid out in the Electoral Act 2002.[9]

Key dates for the election were:[10]

Polling conducted by Newspoll and published in The Australian is performed via random telephone number selection in city and country areas. Sampling sizes usually consist of over 1000 electors, with the declared margin of error at ±3 percent.