China Martyrs of 1900
For the use of this term relating to other churches, see Chinese Martyrs. 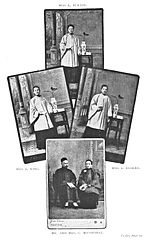 The "China Martyrs of 1900" is a term used by the Protestant Christian church to refer to its members who were killed during the 1900 Boxer Rebellion, when targeted attacks took place across mainland China against Christians and foreigners.

A total of 182 Protestant missionaries and 500 Chinese Protestants were known to have been killed, but the numbers of native Chinese involved may have been higher. The China Inland Mission, where 58 adults and 21 children were killed, had the highest losses of any agency.

However, in 1901, when the allied nations were demanding compensation from the Chinese government, Hudson Taylor, a British Protestant Christian missionary to China and founder of the China Inland Mission (CIM) (now OMF International), refused to accept payment for loss of property or life in order to demonstrate the meekness of Christ to the Chinese.[1]