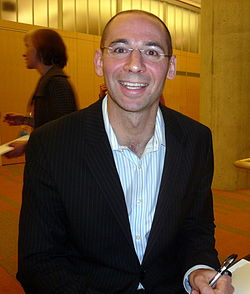 David Plotz (born January 31, 1970 [1]) is an American journalist. A writer with Slate since its inception in 1996, Plotz was designated as the online magazine's editor in June 2008, succeeding Jacob Weisberg.[2]

David Plotz grew up in Washington, D.C., the child of Judith Plotz, an English professor at The George Washington University, and Dr. Paul Plotz, researcher at the National Institutes of Health. He attended Lafayette Elementary School and the St. Albans School.

In 1992, Plotz graduated from Harvard University. Prior to his work at Slate, he worked as a paralegal for the Department of Justice, which he disliked, switching to journalism. Thereafter, he served as a writer and editor for the Washington City Paper. He joined Slate when it launched in 1996.

Plotz has also written for the New York Times Magazine, Harper's, Reader's Digest, Rolling Stone, New Republic, Washington Post, and GQ. He won the National Press Club's Hume Award for Political Reporting in 2000, was a National Magazine Award finalist, for a Harper's article about South Carolina's gambling industry and won an Online Journalism Award for a Slate piece on Enron. He also appears on the weekly Slate Political Gabfest podcast with John Dickerson and Emily Bazelon.

He is the author of The Genius Factory: The Curious History of the Nobel Prize Sperm Bank (2005) and Good Book: The Bizarre, Hilarious, Disturbing, Marvelous, and Inspiring Things I Learned when I Read Every Single Word of the Bible (2009),[3] based on his "Blogging the Bible" series from Slate.com.

He is married to Hanna Rosin, a former reporter for the Washington Post. They live in Washington, D.C., with their three children.