The immense popularity and wide recognition of J. K. Rowling's Harry Potter fantasy series has led to its being extensively parodied, in works spanning nearly every medium. The franchise holds the record for the most fan fiction parodies, at over 400,000.[1] Some self-described parodies have been targeted by Rowling and her publishers as plagiarism,[2] while others have sold hundreds of thousands of copies without any threat of legal sanction.[3] Misinterpretations of Harry Potter parodies have sparked at least two urban legends.[4][5] Many Harry Potter parodies are self-published; others are put out as part of major comic productions, such as Mad, The Simpsons, South Park, Saturday Night Live and Robot Chicken, all of which have parodied Harry Potter several times. Rowling has also been parodied (and parodied herself) in a number of instances. 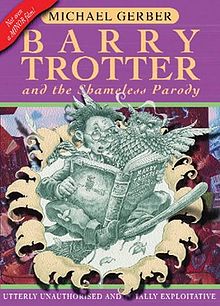 The Barry Trotter and the Shameless Parody dustjacket. 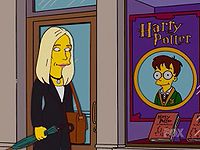 Rowling — or, as the article referred to and credited her, Mrs. J. K. Satan — said that as she sat in a coffee shop one grey day, wondering what to do with her empty, aimless life, it hit her: "I'll give myself, body and soul, to the Dark Master. And in return, he will give me absurd wealth and power over the weak and pitiful of the world. And he did!"

Like The Onion's article on Harry Potter and Satanism, this article too was copied into a chain letter and released as truth onto the web.[5]