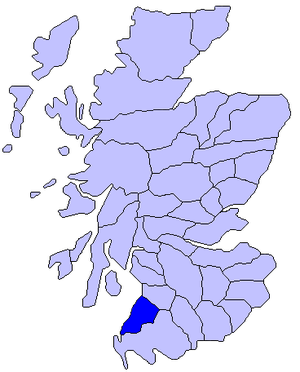 Map of Scotland showing the district of Carrick

The word Carrick comes from the Gaelic word Carraig, meaning rock or rocky place. Maybole was the historic capital of Carrick. The county was eventually combined into Ayrshire which was divided naturally by its rivers. into the three districts of Cunninghame in the north along the River Irvine, in the centre by the River Ayr and Kyle in the south along the River Doon by the District of Carrick. These three districts formed Ayrshire, one of the counties of Scotland. The main reorganisation took place during the Local Government (Scotland) Act 1889, this Act established a uniform system of county councils and town councils in Scotland and restructured many of Scotland’s counties. (See: History of local government in the United Kingdom)

The Earldom of Carrick was home to Scotland's Bruce family. Robert de Bruce, the 6th Lord of Annandale, acquired the Earldom as a result of his 1274 marriage to the widow, Marjorie of Carrick. Their son became King Robert I of Scotland, more commonly known as Robert the Bruce. The title Earl of Carrick is now one of the lesser Scottish titles of the heir apparent to the throne, currently Prince Charles, the Prince of Wales, whose principal Scottish title is Duke of Rothesay.

Kyle and Carrick was the former name (1975-1996) of a local government district in the Strathclyde region of Scotland. In 1996 it was re-constituted as a Unitary Authority, but renamed South Ayrshire.