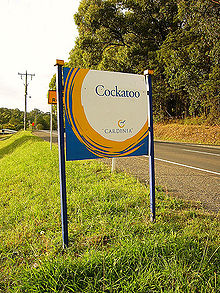 Cockatoo is a town in Victoria, Australia, 48 km south-east from Melbourne's central business district. Its Local Government Area is the Shire of Cardinia. At the 2006 Census, Cockatoo had a population of 4,560.

Cockatoo is named after Cockatoo Creek, which runs through the town, and which the town was previously named.

Cockatoo was named after Cockatoo Creek. It was first settled in the 1870s but progress was tardy as the land was difficult to clear.

A Post Office was not opened until 1 November 1901 when the railway arrived and was known as Cockatoo Creek until 1917.[2]

Shortly after the end of the World War I, a large number of immigrants went to live in Cockatoo while working in Melbourne. The most significant wave was made by Italians. Timbergetting was the major source of employment and this industry received a considerable boost when the narrow-gauge railway from Upper Ferntree Gully to Gembrook was completed in 1900. Moreover, the railway brought leisure-seeking Melburnians into the area and a market for subdivision arose. The railway is operated today as the Puffing Billy Railway.

Cockatoo is best known as one of the worst-hit townships during the disastrous 1983 Ash Wednesday Bushfires, where over 300 buildings were destroyed and 6 lives lost.

The Cardinia Shire Council provides a mobile library service at the McBride Street carpark on Thursday evenings and Saturday mornings. The town has received a state government grant to start a community garden site on the Pakenham Road reserve growing various fruit and vegetables. Cockatoo Primary School, near the town centre, recently celebrated its centenary.

Other services in the town include:

Cockatoo has two main sporting areas: Mountain Road reserve, which has a football oval, netball courts, indoor YMCA Stadium and Little Athletics Course; and Bailey Road tennis courts. The Josie Bysouth reserve is a smaller ground mainly used for equestrian events and pony club. The main sport of the town is Australian Rules Football with the Gembrook-Cockatoo Football Club or "Brookers" representing the town in both the local senior and junior leagues in the Yarra Valley Mountain District Football League.[3]

Cockatoo has a committee that lobbies local and state governments for funding and local recognition of the town; the committee meets monthly and discusses local issues and projects.

The area is served by the 695 bus route operated from Belgrave by US Bus Lines. This service is extended to Westfield Fountain Gate shopping centre on Friday/Saturday (695F) and to Dandenong Market on Tuesdays. This route is about to undergo an extensive overhaul including operating to a 40-minute frequency on weekdays until 10 pm. Other improvements include a new Sunday timetable and a Saturday timetable operating from 6 am to 10 pm. Cockatoo is indirectly served by route 838 (Emerald to Fountain Gate Shopping Centre via Berwick) provided by Cardinia Transit, which connects with route 695 at Emerald.

Cockatoo has a railway station on the Puffing Billy Railway. The Puffing Billy service generally runs once or twice daily and continues from Cockatoo to Gembrook. Cockatoo station consists only of a platform with a small (non-original) station building which is usually un-manned.

Wright Forest, a 161-hectare reserve to the northwest of the town, is managed by Parks Victoria and is a fauna sanctuary. The forest has scars of the Ash Wednesday fires that swept through the area in 1983 with some trees still showing charred bark. The forest is home to many animal species such as the brushtail possums, wombats and many bird species. The forest has many tracks for bush walkers, the main one being the Emerald to Gembrook trail. This recently came under fire for its title as a beginners walking trail; lack of signage left some walkers lost and its steep gradients resembled an experienced walking track. Other trails wind through the forest and are colour-coded.