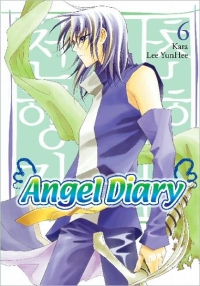 "Angel Diary" (Korean: 천행기 "Cheonhaeng'gi"; hanja: 天行記 "Cheonhaeng'gi"; "Destination Heaven Chronicles") is a manga style "(korean comic)" written by and drawn by Kara. It is based around the errant Princess of Heaven who is hiding on Earth as a boy, and the four guardians of heaven who watch over her.

The Princess of Heaven, Chun-yoo, runs away from her betrothed finance, the King of Hell, and finds refuge on Earth disguised as a high school boy, Dong-young. "He" has a perverted best friend Bi-wal who likes to grope "him" in front of everyone. The Four Guardians of Heaven are sent to find her in the mortal world. But on Earth, there is also hidden dangers and evil beings trying to capture the now vulnerable princess.

Kara has noted that Angel Diary takes place in the same universe as a previous work, Demon Diary, though any characters from the first series have yet to be seen, except as similarities in appearance. In volume 5, however, Ah-hin can be seen reading a Demon Diary volume.

;Chun-yoo/Dong-young:The Princess of Heaven and the main character of "Angel Diary", she does not wish to be married to the King of Hell, to whom she is betrothed, and so runs away, taking refuge as a school boy. Her school boy alter-ego is named Dong-young. "He" attends a high school where many of the other students are not normal. He is watched over by two of the Four Guardians of Heaven.:Also after he is found that he is the Princess, Doh-Hyun is more protective of him and he threatens that if he finds her in a bad situation once he is taking her back to Heaven.

;Bi-wal:Bi-wal is the friend of Dong-young and attends the same high school. They are very close and are often confused by other students to be homosexual or "boy-lovers". He is the only character who suspects Dong-young to be the Princess. He sometimes likes to grope Dong-young even after "finding out" that she was a girl (he had already known that she was a girl before he accidentally saw her bound chest). Bi-wal is also shown to be something more than a human (as he seems to have a great deal of power by killing a nymph to save Dong-young and is also a fiance of a noble from Hell) and has a hidden agenda regarding Dong-young. Later in the series, Bi-wal is said to be the real king of hell. Bi-wal and Doung-young knew each other since their childhood, but Dong-young doesn't remember it and the promise they made.

:Some fans note that Bi-wal resembles a younger version of Eclipse, the dour tutor from Demon Diary, an earlier Kara work.

;Ah-hin:One of the Four Guardians of Heaven, the "White Tiger", and was mistaken as Ee-jung by Woo-hyun, who had bullied her when they were little because of her appearance and her mother's ill-reputation. She is the friend of Dong-young and is also a student at Dong-young's school in order to protect her and to prevent her identity from being discovered by the other two Guardians of Heaven who were sent to capture the angel princess. Ee-jung's older sister, she cares for her brother dearly and tries to make him enjoy himself more. Despite having been bullied by Woo-hyun and saying she'd never talk to him again, Ah-hin seems to have some feelings for him, and later goes out with him.

;Ee-jung:Another of the Four Guardians of Heaven, the "Red Phoenix". Because he is the Red Phoenix, it is traditional that he wore female clothing as a child and as a result, he was mistaken as Ah-hin by Woo-hyun. He is very protective of Ah-hin because she was bullied and is very cold toward Woo-hyun because he blames him for changing Ah-hin's personality. Ee-jung is close to his elder sister and will do almost whatever she asks of him. He is also a student at Dong-young's school.

Ee-jung has a startling similarity in appearance to the Demon Lord Raenef V from Demon Diary, though both are near polar opposites in personality.

;Woo-Hyun:One of the Four Guardians of Heaven, the "Blue Dragon". He is also one of the two Guardians ordered to capture the angel princess. When they were all little, Woo-hyun teased Ah-hin while thinking that she was Ee-jung because he had a crush on her. Even after a few years, Woo-hyun still likes Ah-hin and tries to make it up to her even with her bitter rejections and Ee-jung's cold warnings. He is also one of the students at Dong-young's school and hunts down evil spirits with Doh-hyun, his cousin.

;Doh-hyun:One of the Four Guardians of Heaven and perhaps the strongest of them all, the "Black Turtle". He is the second of the two Guardians ordered to capture the angel princess. Despite his observative nature, Doh-hyun finds out that Dong-young is a girl but still does not make the connection that she is, in fact, the angel princess that he was ordered to capture. He have a cursh on the princess(Chun-yoo/Dong-young).In later volumes of the manga, it was found out that since they were still little kids, Doh-hyun has liked the princess and wanted to protect her until the end. He has great feelings for Dong-young and even thought that marrying her in the end will be a good idea.

;Cho-Ryun:This tree spirit appears in volume 2, at first he appears to Doh-hyun and Woo-hyun, looking for his friend. He is from the Princess's Garden in Heaven and has come to Earth to look for his friend (who is Ah-Hin) He looks like a girl, and so at first Doh-Hyun and Woo-Hyun think he is a 'she', but they found out that 'she' is a 'he' by when Woo-hyun told him "You can stay with us for a while, Miss Cho-Ryun" and he respones "I'm not a 'miss', but a 'mister' (a male tree with flowers)and he is also involved in a idea to find out who the real princess is by reconizing her with Woo-Hyun and Doh-Hyun.

;Mi-Hyang So-Wal:Bi-Wal's fiance from hell. She comes from a noble family in hell and has a crush on Bi-Wal and comes to earth to find the princess for unknown reasons.

;The Ghost:The unnamed ghost of a suicide victim who possesses Dong-Young in order to terrorize the school where he was tormented by other students in life. Dong-young was saved by Woo-Hyun and Doh-Hyun although they did not know they had actually saved Chun-yoo Nim. This caused Dong-young to make remarks that nearly betrayed her true identity such as, "A male ghost was inside me!"

;Water Nymph:A water nymph appearing in volumes one and two that lives in the pond near Dong-Young's school vacation spot. Not knowing that humans cannot live underwater, she accidentally drowned her lover long ago in an attempt to live with him forever in her submerged palace. Thinking he was only ill, she called on the advice of a mysterious Bi-Wal look-a-like (revealed later to be Bi-Wal's brother) who told her to call an angel from Heaven to her pond and use its sacrificed blood to "cure" her lover. The water nymph seizes the opportunity to lure Dong-Youn into her home for the sacrifice. However, upon finding his love interest kidnapped, Bi-Wal enters the underwater lair to rescue Dong-Young. Before killing the nymph, he reveals to her that "she" in fact killed her lover and that no sacrifice would bring him back.