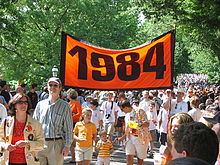 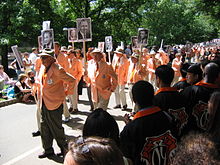 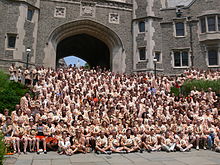 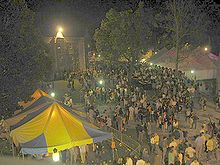 The Princeton Reunions are an annual college reunion event held every year on the weekend before commencement at Princeton University. It is known as the most well-attended college reunion in the world, as well as the largest single order of beer after the Indy 500.[1] Known simply as "Reunions", this event brings back to campus upwards of 20,000 alumni, and at least that many guests, for a four-day celebration featuring large outdoor tents, elaborate costumes, sporting events, alumni and faculty presentations, fireworks, bands from rock to swing, and oceans of beer.

A Princeton Companion [1] places the advent of Princeton reunions shortly after the end of the Civil War. The 1890s (especially the University's 150th anniversary in 1896) saw increasing interest, although it was not until the 1950s that Reunions took on today's level of organization, particularly with respect to on-campus housing for returning alums.

The Alumni Parade, known today as the P-rade, is the capstone of the Reunions weekend. Held on Saturday, it is the last major event — save for the fireworks display (introduced in 1996 in celebration of the 250th year since the University's founding.) The 25th Reunion class heads the parade; they are led by the Princeton University Band, which plays traditional songs such as Goin' Back to Nassau Hall.

The P-rade then proceeds with members of each class from oldest to youngest, accompanied by spouses, children, family members, and even pets. Alumni of the Graduate School normally take the place of the 25th reunion in the sequence. In 2000 and 2001, to celebrate the centennial of the Graduate College, the Graduate School alumni marched immediately behind the 25th Reunion class. Each year, the University president honors the oldest returning alumnus by presenting him with a silver cane donated by the class of 1923. The bearer of that cane from 2002 to 2005 was Leonard Ernst '25. Ernst and most older alumni are typically chauffeured along the parade route by golf carts, but in 2001, Malcolm Warnock '25 impressed everyone by walking the last segment of the P-rade, waving his cane toward an appreciative crowd.

Classes celebrating a major reunion (multiples of five—-5th, 10th, and so on) often wear themed costumes, which have ranged from Dutch boys and Roman legionnaires to firefighters and Uncle Sam look-alikes. Costumes and themes are often completely unrelated to Princeton or the year the class graduated. [2]

Frequently, classes will hire musical groups, such as the Mummers, local high school marching bands, and a calliope, to lead them through the parade.

The P-Rade begins on Nassau Street, enters the campus through FitzRandolph Gate in front of Nassau Hall, then proceeds through Cannon Green. Until the early 1990s, the route continued across McCosh Walk, through 1879 Arch, down Prospect Avenue, and finished on the baseball field. However, because of escalating public liability and insurance costs, the University moved the P-Rade route to stay only on the private property of the University. Some think the University also felt that too many alumni would stop off at their eating clubs on Prospect Avenue before finishing the P-Rade, and so it changed (and shortened) the route so that it does not leave campus. Currently, after crossing Cannon Green, the P-Rade proceeds down Elm Drive through the center of campus, and onto Poe Field. The Classes are arranged on both sides of the entire route, so that each cheers its elders, then falls in line to march past those younger. The P-rade ends as the graduating seniors race onto Poe Field under review of the President of the University, and are then formally welcomed as alumni/ae.

An outdoor orchestra concert and an elaborate evening fireworks display set to music, first held to celebrate the university's 250th anniversary in 1996, but repeated every year since by popular demand, is held the Saturday evening of Reunions. This can be seen as a closing ceremony of Reunions; however, the Reunions parties do not officially end until 2 a.m. that night, and low-key brunches are often held Sunday morning, at which point Reunions Weekend fades into Commencement Weekend.

Unofficially, after the tents close, the party moves to the eating clubs on Prospect Avenue and will go until sunrise, especially Saturday night.