Manayunk is a neighborhood in the northwestern section of the city of Philadelphia, Pennsylvania in the United States. Located on the banks of the Schuylkill River, it contains the first canal begun in the United States (although not the first completed due to budget problems).[1] The area's name comes from the language of the Lenape Indians (later called the Delaware Indians by Europeans). In 1686-dated papers between William Penn and the Lenape, the Lenape referred to the Schuylkill River as "Manaiung", their word for "river", which literally translates as "place to drink"; the word was later altered and adopted as the town's name.[2][3]

Although historically a working class community, in recent years the neighborhood has been substantially gentrified.[4] Today's residents are mostly middle- to upper-middle class.[citation needed] 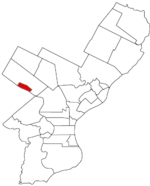 Map of Philadelphia County, Pennsylvania highlighting Manayunk Borough prior to the Act of Consolidation, 1854 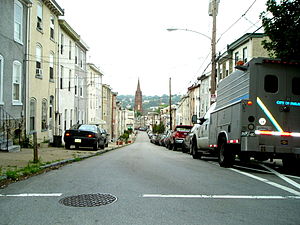 Manayunk was originally a community in Roxborough Township, Philadelphia County, situated near the Schuylkill River, south of the Wissahickon Creek. The land that would become Manayunk was first bought from William Penn in 1685-1686 and then transferred to the family of William Levering. A large part of that land was then sold to Levering's son, Jacob, in 1716. Soon, the younger Levering built the first house in Manayunk, on the north side of Green Lane, west of Silverwood Street. The growing town was known as Flat Rock in 1810, from a peculiar flat rock lying on the lower side of the bridge. This was subsequently called Flat Rock Bridge. The bridge was part of the Flat Rock Turnpike connecting Roxborough Township with Merion Township.

The settlement got its nineteenth-century identity from the construction of the dam, canal, and locks by the Schuylkill Navigation Company. The Manayunk section was finished at the end of 1818. Since the power provided by the water was extensive, the Navigation Company sought lessees of the power for use in mills and factories. In 1819, Capt. John Towers opened the first mill that used the canal's water power. After that, purchases of water-power and the erection of mills and factories greatly increased. The area became important as a manufacturing village.

Manayunk was populated by a mix of German, Irish and Polish immigrants as well as numerous African Americans. Several immigrant groups established and maintained their own Catholic churches, including: St. John the Baptist (Irish), St. Lucy's (Italian), St. Mary's (German) and St. Josaphat's (Polish), giving rise to Manayunk's "church steeples in a hill town village" character. There are also several historic Protestant churches in the neighborhood. The Episcopal Church of St. David's, Manayunk, was founded December 3, 1831.[5] The Josie D Heard AME church was founded in 1924 to serve African American residents.[6]. Other residents traditionally attended church services at the numerous congregations found in nearby Roxborough.

Inhabitants became dissatisfied with the name "Flat Rock" and held meetings on the topic of changing the name. On one such occasion in 1824, Greek revivalists wanted to call it Udoravia ("place by the water"), but this was later overturned in favor of the Lenape word for river mëneyung or manaiung ("where we go to drink").[citation needed] For ease of spelling the "i" was changed to a "y" and the "g" to a "k".

On June 11, 1840, Manayunk was incorporated as a borough. It was no longer considered part of the "Township or Borough of Rocks" (Roxborough).

The borough would last only 14 years. Manayunk and the rest of the boroughs, townships, and districts comprising Philadelphia County were disbanded and merged into the City of Philadelphia, through the Act of Consolidation, 1854. Although Manayunk was no longer a separate entity, the community maintained its identity as a self-contained neighborhood.

Near the end of the American Civil War, a Canonicus-class monitor was launched as USS Manayunk. However, when she was commissioned four years later, the ship was renamed USS Ajax by the prominent Philadelphian Secretary of the Navy Adolph E. Borie.

Manayunk continued to be one of the manufacturing centers of Philadelphia for the next 100 years, but in the 1980s, Manayunk suffered from the decline of manufacturing jobs. It had many empty storefronts along Main Street, its primary commercial district. In the 1990s, Manayunk's revitalization began with the opening of several upscale restaurants on Main Street, which were backed by developers who promoted the neighborhood as a place to visit.

Manayunk retained its small-town charm with its small two- and three-story row homes, cobblestone paving, and hilly streets. Many who visited decided to stay and renovate the small row homes characteristic of the area. Increasing demand for housing in the area has led to the conversion of former mills into loft apartments, and replacement of empty storefronts and mom-and-pop stores with upscale shops. In 2004, a new condominium tower was built on part of Venice Island. In 2005 there were plans to build more condominium towers to replace the closed soap and paper factories. Manayunk has become a popular nightlife destination for college students and business commuters due in part to the many bars and restaurants in the area, a fact that emphasizes the historical meaning of the borough's name.

Main Street continues on to Umbria Street when heading north. Umbria Street was once known as Washington Street. The name was changed to reflect a large influx of Italian immigrants at the beginning of the 20th century. Italian-American heritage is still evident on storefront signage along the southern side of the neighborhood, such as the well-known Consolo's Bakery on the corner of Hermitage and Smick Streets, now closed.

Venturi, Scott Brown and Associates, historically important and internationally acclaimed architectural office, has been headquartered at Main and Rector Sts. in Manayunk since 1979.

Note: A very detailed early history of Manayunk is contained in "Early History of the Falls of Schuylkill, Manayunk, Schuylkill and Lehigh Navigation Companies, Fairmount Waterworks, Etc.", by Charles V. Hagner, in 1869. It was reprinted by the University of Michigan in 2010 as part of its Historical Reprint Series.

The SEPTA Manayunk/Norristown Line ex-Reading Railroad rail line runs through Manayunk, partly along an elevated structure above Cresson Street. The Manayunk train station is located on this elevated section. The Cynwyd Line used to have a stop in Manayunk before the line was cut back to its current terminus in Bala Cynwyd. This line used the landmark Manayunk Bridge, a concrete railroad viaduct built by the Pennsylvania Railroad which spans the Schuylkill River. Manayunk Bridge is an icon of Manayunk.

Honored by the U.S. Navy

USS Manayunk during the Spanish-American War.

The first was the monitor USS Manayunk (1864) which was constructed in Pittsburgh, Pennsylvania, for use in the American Civil War, but was commissioned too late to serve in that action. She was later pulled out of reserve and renamed USS Ajax (1864), and saw action in the Spanish-American War.

The second ship to be named Manayunk was the World War II net laying ship USS Manayunk (AN-81), built in Portland, Oregon, which, like the first USS Manayunk, was built late in the war, but did operate in the Pacific Ocean in the Mariana Islands, primarily in the Saipan-Tinian area, laying and maintaining nets and moorings until the spring of 1946.

Free Library of Philadelphia operates the Roxborough Branch, serving Manayunk, at 6245 Ridge Avenue at Hermitage Street.[9] A now defunct Manayunk branch is located on the corner of Fleming and Dupont Streets.