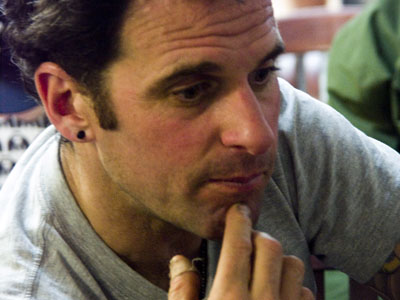 Andrew Zephyr Witten is a artist, lecturer and author from New York City. He began creating graffiti in and first signed using the name "Zephyr" in . He has been identified as a graffiti "elder", who along with , Blade, , and invented styles and standards "that continue to be used and expanded upon today".ref|elder

Much of Zephyr's original work was applied on subway trains. Mr. Witten has commented on this period of his work:

Witten was part of the first wave of graffiti artists to make the transition to galleries, collectors and commercial work. In the early 80s, he showed at NYC galleries specialized in graffiti, such as the FUN Gallery and 51X.ref|Fun His art was part of a five-man show including , Dominique Philbert, Futura 2000 and Dondi White that toured Japan in 1983.ref|Jap In 2005, he was included in the East Village USA show held at .ref|NM

His works can be seen in the Hip-hop culture documentary "" and he was featured as himself in the landmark hip-hop motion picture "". He is co-author of a 2001 biography of fellow graffiti artist, Dondi White: "Dondi White Style Master General: The Life of Graffiti Artist Dondi White". He is interviewed in the 2005 DIY graffiti video The Art of Storytelling, where he talks about fallen graffiti artist "".

His name comes from the Greek word Ζεφυρός, which means west wind.

Witten's influence on New York City's self-image is exemplified in 's 2007 song "Zephyr and I," which uses a conversation between Vega and Witten as a framing device to create what Vega describes as "sort of a little snapshot of what used to be like in the 70s."ref|Vega