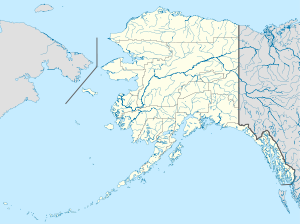 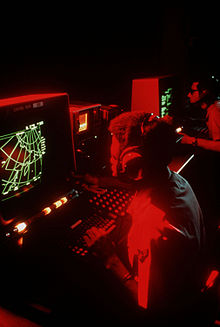 Displays for the COBRA DANE system, 1977

Eareckson Air Station (IATA: SYA, ICAO: PASY) is a United States Air Force military airport located on the island of Shemya, in the Alaskan Aleutian Islands. It was closed as an active Air Force Station on 1 July 1994, however the airport is still owned by the USAF and is operated by the USAF 611th Air Support Squadron at Elmendorf AFB for refueling purposes.

On April 6, 1993, Shemya Air Force Base was renamed Eareckson Air Station. The renaming ceremony was held 19 May 1993. The Eleventh Air Force Association initiated renaming the base to honor their wartime commander, Colonel William O. Eareckson. From 1941 to 1943, Colonel Eareckson personally led all of the difficult missions against the Japanese which were located on two other Aleutian Islands, Kiska and Attu. The Colonel also helped plan the successful retaking of Attu. During the bombing campaigns, he introduced low-level skip bombing and forward air control procedures long before they became common practices in other war theaters.

Eareckson Air Station is located on the western tip of Alaska's Aleutian islands near the larger island of Attu, and is located approximately 1500 miles southwest of Anchorage. The airport lies on the south side of the 2 mile by 4 mile island and is 97 feet above mean sea level.

United States military forces first occupied the once uninhabited island on 23 May 1943, during the final days of the World War II Aleutian Campaign battle to retake Attu from the Japanese. Shemya Army Airfield was established as part of that effort.

A 10,000-foot runway was constructed, along with two 5,000-foot cross runways supported a variety of aircraft. The 404th Bombardment Squadron flew B-24 Liberator heavy bombers along with one Beechcraft AT-7, which was used for navigator training. The 344th Fighter Squadron flew both P-40 Warhawks and P-38 Lightnings. In addition, a North American AT-6 was utilized for pilot training. One RB-34, a UC-64A and numerous TB-26's were flown by the 15th Tow Target Squadron that was stationed on Shemya. The Navy assigned one squadron of PB4Y-2's, which were single tail versions of the twin tail B-24. Many administrative and cargo aircraft, such as the C-47 "Gooney Bird" flew in and out of Shemya during the war. The dispersal aircraft standings were placed in the area to the north of the main runway

The long runway was intended for B-29 Superfortress use for the bombing of Japan and Birchwood hangars were constructed to accommodate the bomber. However, the Joint Chiefs of Staff decided to employ the B-29s from China and the Mariana Islands in the central Pacific. Shemya, instead, became the home of the 28th Bomber Group whose B-24s flew bomber and photoreconnaissance missions against the northern Kurile Islands while its B-25s, based on Attu, attacked Japanese shipping in the North Pacific. The Group was inactivated in October 1945. Shemya was one of numerous bases utilized by the Russian pilots under the lend-lease program.

Shemya was important for various reasons. It provided a base for offensive operations against the Kuriles, and was utilized as a transit base by Russian pilots flying planes and material under the Lend Lease program. In addition, it provided weather stations for the U. S. Army and Navy. In addition, Japanese troops were committed to watching Shemya against a possible thrust by the United States from the Aleutians.

General Hoyt S. Vandenberg, Air Force Chief of Staff announced the abandonment of Shemya except for a stand-by force. The last operational unit, the 66th Fighter Squadron, left the airfield on 30 May 1947. For a time the Air Force considered transferring the island to the Civil Aeronautics Authority, the forerunner of the Federal Aviation Administration. However, the Air Force decided to retain Shemya because its location provided an ideal refueling stop on the Great Circle Route from Japan to McChord Field, Washington.

The Korean War brought extensive use by the Military Air Transport Service (MATS) for the logistical support of Korea and Japan. Its strategic location drastically shortened the air route to the orient. With the development of Trans-Pacific airlifters (C-124), Shemya was declared surplus and the base was inactivated on 1 July 1954. The facilities were turned over to the Civil Aeronautics Authority in 1955. They were then leased to Northwest Orient Airlines who remained on the island until 1961.

In 1958, the Air Force resumed operations on Shemya in support of various Air Force and Army strategic intelligence collection activities.

Shemya also continued to support the Great Circle Route for MATS and later Military Airlift Command transports between Japan and Elmendorf AFB. The 5040th Air Base Squadron was activated on 15 July 1958 to provide base support. The stations initial use was that of a long range weather station, with WB-50D Superfortresses being flown from the base by the MATS 7th Weather Group, Air Weather Service.

It also became a Strategic Air Command refueling site for B-52 Stratofortress bombers and KC-135 tankers as part of Operation Chrome Dome. SAC would have the tankers rotated to Shemya where they were re-fueled prior to taking off and refueling the loitering B-52s over Alaska which would loiter outside the Soviet Union to provide rapid first strike or retaliation capability in case of nuclear war. Shemya also supported various SAC Boeing RC-135 "Rivet" reconnaissance aircraft flying along the Soviet Pacific Coast with on-board sensors which enable the crew to detect, identify and geolocate signals throughout the electromagnetic spectrum.

In 1966 the Air Defense Command 9th Air Division assumed jurisdiction of the base. ADC organized the 16th Surveillance Squadron with AN/FPS-17 Detection and AN/FPS-80 Tracking Radars to monitor Soviet missile tests on the Kamchatka Pensula and to support the Air Force Spacetrack System. Soviet fishing trawlers were a common sight in the offshore waters of the island, monitoring the squadrons's activities.

In July 1973, Raytheon won a contract to build a system called COBRA DANE on Shemya. Cobra Dane replaced the AN/FPS-17 and AN/FPS-80 radars with a more powerful AN/FPS-108 phased-array radar. Cobra Dane was declared operational on 1 August 1977. Its primary mission of intelligence gathering in support of verification of the SALT II arms limitation agreement.

The station was also used by SAC Cobra Ball and other related projects which monitored missile-associated signals and tracks missiles during boost and re-entry phases to provide reconnaissance for treaty verification and theater ballistic missile proliferation. The aircraft used were extensively modified C-135Bs.[1]

In August 1988, at least one Aries rocket was launched, relating to the Queen Match program, for anti-ballistic missile testing.[2]

Jurisdiction of Shemya AFB was transferred from the Aerospace Defense Command to the Strategic Air Command when the former was inactivated on 1 October 1979. It was transferred to the Air Force Space Command on 1 May 1983. During the 1980s the facilities on Shemya were upgraded. Many of the old World War II structures were replaced with modem buildings and new facilities were built.

On 1 July 1994, the 11th Air Control Wing was inactivated and the 673d ABG was reassigned to Eleventh Air Force. The 673d Air Base Group provided base support to various tenant units assigned to other Air Force commands, such as the Air Force Space Command and other agencies involved in intelligence gathering activities directed by the National Command Authority.

On 1 April 1995, Eareckson AS was converted to contractor operations and maintenance, providing all support on the island. Effective 1 June 2005 CMI became the BOS contractor

Eareckson Air Station has one runway:

There is also an NDB, TACAN and a VOR on the island.

Two other runways on the west side of the island were constructed during World War II and have since been abandoned.