The Petrograd Soviet became important during the Russian Revolution leading up to the October Revolution as a rival power center to the Provisional Government.

Before 1914, Petrograd was known as Saint Petersburg, and in 1905 the workers' soviet called the St Petersburg Soviet was created. But the main precursor to the 1917 Petrograd Soviet was the Central Workers' Group (Центральная Рабочая Группа, Tsentral'naya Rabochaya Grupa), founded in November 1915 by the Mensheviks to sit between workers and the new Central Military-Industrial Committee in Petrograd. The group became increasingly radical as World War I progressed and the economic situation became worse, encouraging street demonstrations and issuing revolutionary proclamations.

On January 27, 1917 (all dates Old Style) the entire leadership of the Central Workers' Group was arrested and taken away to the Peter and Paul Fortress on the orders of Alexander Protopopov, the Minister of the Interior in Imperial Russia. They were freed by a crowd of disaffected soldiers on the morning of February 27, the beginning of the February Revolution, and the chairman convened a meeting to organize and elect a Soviet of Workers' Deputies that day.

That evening, between 50 and 300 people attended the meeting at the Tauride Palace. A provisional executive committee (Ispolkom), was chosen with Nikolay Chkheidze as head, and with mostly Menshevik deputies. (Chkheize was replaced by Irakli Tsereteli in late March). Izvestia was chosen as the official newspaper of the group. The following day, February 28, was the plenary session; elected representatives from factories and the military joined the soviet, and again moderates dominated. Non-representative voting and enthusiasm gave the Soviet almost 3,000 deputies in two weeks, of which the majority were soldiers. The meetings were chaotic, confused and unruly, little more than a stage for speechmakers. The party-based Ispolkom quickly took charge of actual decision-making.

The Executive Committee members came only from political groups, with every socialist party given three seats (agreed March 18). This created an intellectual and radical head to the peasant-, worker-, and soldier-dominated body. The Executive Committee meetings were more intense and almost as disorderly as the public meetings, and were often extremely long.

On March 1, the Executive Committee resolved to remain outside any new State Duma. This allowed the group to criticize without responsibility, and kept them away from any potential backlash. On March 2, the Soviet received the eight-point program of the Provisional Committee of the State Duma, appointed an oversight committee (nabliudatel'nyi komitet), and issued a decidedly conditional statement of support. Moreover, the Soviet undermined the Provisional Government by issuing its own orders, beginning with the seven-article Order No. 1. The Soviet was not opposed to the war – internal divisions produced a public ambivalence–but was deeply worried about counterrevolutionary moves from the military, and was determined to have garrison troops firmly on its side.

Power struggle with the Provisional Government

This created a situation described as dvoevlastie (dual power), in which the Petrograd Soviet competed for legitimacy with the Provisional Government until the October Revolution.

The Ispolkom (the "executive committee") of the Petrograd Soviet often publicly attacked the Provisional Government as bourgeois and boasted of its de facto power over de jure authority (control over post, telegraphs, the press, railroads, food supply, and other infrastructure). A "shadow government" with a Contact Commission (created March 8) to "inform... [the Provisional Government] about the demands of the revolutionary people, to exert pressure on the government to satisfy all these demands, and to exercise uninterrupted control over their implementation." On March 19, the control extended into the military frontlines with commissars appointed with Ministry of War support.

On March 1917, the Petrograd Soviet was actually opposed to the workers, which protested its deliberations with strikes.[1] On March 8, the Menshevik Rabochaia Gazeta even claimed that the strikers were discrediting the soviet by not obeying it.[1]

The Ispolkom expanded to 19 members on April 8, nine representing the Soldiers' Section, and ten the Workers' Section. All members were socialists, the majority Mensheviks or Socialist-Revolutionaries; there was no Bolshevik representation. After the All-Russian Consultation of Soviets, the Petrograd Soviet began adding representatives from other parts of Russia and the front lines, renaming itself the All-Russian Soviet of Workers' and Soldiers' Deputies. The executive committee became the All-Russian Central Executive Committee (CEC or VTsIK) with over 70 members (but no peasant representatives). The mass meeting of the entire body were tapered off, being reduced from daily in the first weeks to roughly weekly by April.

Disputes over war aims led to street protests on April 20–21, including military units protesting outside the Mariinsky Palace. The unrest was quickly directed by Bolshevik leaders into what some interpret as a coup attempt.[who?] The Ispolkom issued proclamations to restrain disorder and repeatedly quashed Lavr Kornilov's demands to put troops and artillery on the streets. There were riots in Petrograd, and also Moscow, but anti-Bolshevik and pro-Provisional Government groups soon stopped the agitators.

The riots deeply worried the Provisional Government. There were a number of resignations, and on May 1, the Ispolkom voted to allow its members to take Cabinet posts in return for further concessions (the Bolsheviks and the left Menshevik followers of Julius Martov opposed the move, and were against any cooperation with the Provisional Government). After negotiations, a new cabinet was chosen on May 6. Alexander Guchkov and Pavel Milyukov, the leader of the Constitutional Democrats (Cadets), left the government. Alexander Kerensky was moved to the Ministry of War. Six socialists took cabinet posts.

Rise of the Bolsheviks

The Bolsheviks rapidly assumed the mantle of the official opposition, and took advantage of the new socialist presence in the Cabinet to attack them for the failures of the Provisional Government. The Bolsheviks began a strong run of propaganda. In June, 100,000 copies of Pravda (including Soldatskaya Pravda, Golos Pravdy, and Okopnaya Pravda) were printed daily. In July, over 350,000 leaflets were distributed. The July Days riots from July 16–17 led by the Bolsheviks were without success.

The rise of Kerensky, and the later shock of the Kornilov affair, polarized the political scene. The Petrograd Soviet moved steadily leftwards, just as those of the center and right consolidated around Kerensky. Despite the events in July, the Ispolkom moved to protect the Bolsheviks from serious consequences, adopting resolutions on August 4 and August 18 against the arrest and prosecution of Bolsheviks. Still wary of the Ispolkom, the government released many senior Bolsheviks on bail or promise of good behavior.

In the August 20 municipal elections, the Bolsheviks took a third of the votes, a 50 percent increase in three months. There was also a general falling away in the attendance of soviet meetings. Indeed, many of the smaller soviets no longer existed except on paper.

During the Kornilov affair, the Ispolkom was forced to use the Bolsheviks' military as its main force against the "counter-revolution." Kerensky ordered the distribution of 40,000 rifles to the workers of Petrograd (some Red Guards), many of which ended in the hands of Bolshevik groups.

As all other socialist parties abandoned the Soviet organizations, the Bolsheviks increased their presence. On September 25, they gained a majority in the Workers' Section and Leon Trotsky was elected chairman. He directed the transformation of the Soviet into an adjunct of the party, bypassing the Menshevik-SR Ispolkom and non-Bolshevik soviets to form a new Bolshevik control structure.

The Bolsheviks used their power in the Petrograd Soviet to set up a second All-Russian Congress of Soviets on October 20 (agreed September 26), despite only eight of 169 soldiers' or workers' soviets expressing support. With the November elections to the Constituent Assembly looming the Bolsheviks had to use their power quickly to discredit the elections. The Ispolkom denounced the Congress and the steps the Bolsheviks were taking to create its delegates. Suddenly and without reason, on October 17, the Ispolkom Bureau approved the Congress. 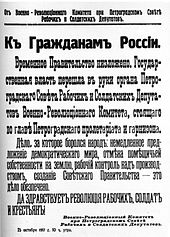 Milrevcom proclamation about the disbanding of the Russian Provisional Government

On October 6, with a German advance threatening the city, the government - after advice from the military – made plans to evacuate to Moscow. The Ispolkom attacked the move and Trotsky had the still-Menshevik Soldiers' Section vote on a resolution condemning the evacuation. The Provisional Government gave way and delayed any evacuation plans indefinitely. Its attempts to dispatch Petrograd garrison units to the front were resisted by the troops and by the Ispolkom.

On October 9, the Soviet considered the creation of a Committee of Revolutionary Defense. The Bolsheviks and Leon Trotsky amended the resolution to create a Military Defense Committee, to control the security of Petrograd against both German and domestic threats. The Plenum of the Soviet voted in favour of a committee to "gather... all the forces participating in the defense of Petrograd... to arm the workers... ensuring the revolutionary defense of Petrograd... against the... military and civilian Kornilovites."

The Ispolkom approved the resolution, against Menshevik resistance, on October 12, and the measure was formally approved by the Soviet on October 16 (despite warnings from the Mensheviks and SRs), creating the Military Revolutionary Committee (Voenno-Revoliutsionnyi Komitet), also called the Milrevcom or Military Committee.

The Military-Revolutionary Committee was chaired by Pavel Lazimir, with Nikolai Podvoisky as his deputy. Basically, it was the front for the activities of the Bolshevik's Military Organization. Podvoisky would take official control of the Committee on the day of the uprising, with Vladimir Antonov-Ovseenko as secretary. The Ispolkom and the Provisional Government had been cut out of control of the forces in the Petrograd Military District, and without orders, the garrison would remain neutral.

The Military Staff was side-lined when the Milrevcom took exclusive control of the garrison troops in the name of the Soldiers' Section of the Soviet on the night of October 21. The commander of the District, Colonel Polkovnikov, refused to allow this control, and he and his staff were condemned in a Milrevcom public statement as "a direct weapon of the counter-revolutionary forces." The military command responded with an ultimatum to the Soviet, which lead to delaying negotiations and meetings over October 23–October 24.

The Bolshevik uprising began on October 24, as liberal forces attempted to shut down Pravda and take other steps to secure the government. The Milrevcom sent armed groups to seize the main telegraph offices and lower the bridges across the Neva. Over the night of October 24, the Bolsheviks took control quickly and easily.

An announcement declaring the end of the Provisional Government and the transfer of power to the Petrograd Soviet was issued by the Milrevcom at 1000 hours on October 25 – in fact written by Lenin. In the early afternoon, an Extraordinary Session of the Petrograd Soviet was convened by Trotsky, to preempt the Congress of Soviets. It was packed with Bolsheviks and Left SR deputies.

The Second Congress of Soviets opened that evening in the Assembly Hall in Smolnyi. The six hundred or so delegates chose a Presidium of three Mensheviks and twenty-one Bolsheviks and Left SRs. The Ispolkom rejected the workings of the Congress the following day, and called on the Soviets and the army to defend the Revolution.

In the evening session of October 26, the Congress approved the Decree on Peace, the Decree on Land and the formation of a new government under Lenin - the Council of People's Commissars (Sovet Narodnykh Komissarov, abbreviated to Sovnarkom) – until the meeting of the Constituent Assembly. The previous Soviet Ispolkom was dismissed and replaced by a new group of 101 members (62 Bolsheviks) under Lev Borisovich Kamenev. The Sovnarkom was accountable to the CEC/VTsIK in theory, but the organization was in every aspect powerless.