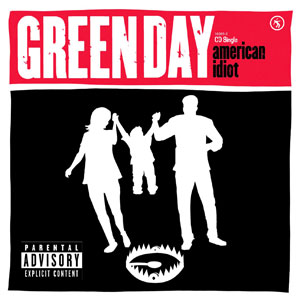 "American Idiot" is a song by American band , and is the first single from their seventh album, "".

Released in , the single peaked at #61 on the , becoming Green Day's first Billboard Hot 100 chart entry (excluding "Warning" which charted on the chart), helping revive the band's career. However, the appearance of "American Idiot" on the US singles charts occurred just prior to 's inclusion of internet download purchases into their chart data, which would have made a significant difference in the song's peak had it benefited from the new chart tabulation system. This most recent form of sales assessment has resulted in the far greater successes of "Boulevard of Broken Dreams", "Holiday" and "".

"American Idiot" became Green Day's first Top 5 single in the , reaching #3, and peaked at #7 in . It debuted at #1 in , holding onto the position for five weeks.

The song was featured in the trailer for the 2005 film "". The song features on the soundtrack of the American football video game "". It was featured as the closing theme song for the first season of the "Andy Milonakis" show. parodied the song on his album "" as "" - a satirical commentary on American nationalism and the stereotypical American view of Canadians. In "",the song was played by an organist at the band's funeral. covered this song into a lounge style on their 2005 album "", and did as well in .

The music video for the song was directed by . It opens in a large open building, presumably a , with the band members playing in front of a large green-and-white American flag. Throughout the song, various stunts are performed, including leaving the drum set and running around the stage. As the video progresses, the green coloring is drained from the flag, leaving only white with the outlines of stars and stripes. When the solo begins, green sewage-like liquid (presumably the coloring from the now-drained flag) explodes from the speakers, and floods the set. At the end of the song, the band members all drop their instruments in the sludge, and walk off the stage.

The song was written by all three members of Green Day, and was co-produced by Green Day and . It is in the key of A-flat major, and is widely known for the that plays through the whole song, excluding the .

The whole song is similar to the intro riff from Dillinger Four's "Doublewhiskeycokenoice", written in . Dillinger Four opened for Green Day on Green Day's tour, and released a split 7" with Billie Joe Armstrong's side project,

Two separate singles for the song were released. One single contains the song "American Idiot", as well as two , "Shoplifter" and "Governator". The latter two songs were both recorded in 2003 and never intended to be used on the "American Idiot" album. Another single exists with only one B-side, the song "Too Much Too Soon".