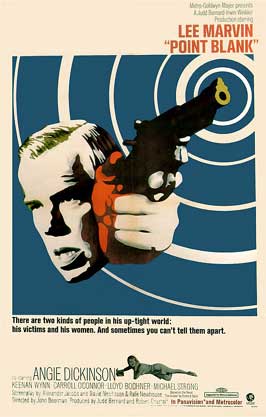 "Point Blank" is a 1967 directed by and starring and , adapted from the classic pulp novel "The Hunter" by , writing as . Boorman directed the film at Marvin's request and Marvin played a central role in the film's development and staging.

The plot centers on the and remorseless Walker (Marvin). The character is named Parker in the novel. Walker is double-crossed and abandoned by his friend, Reese ('s first major role). After taking all the cash robbed from a courier in a large gambling operation, Reese shoots his partner Walker multiple times, and leaves him apparently for dead. In a double-double-cross, Reese also makes off with Walker's wife, ().

Afterwards, Walker sets out to recover his lost money, chasing Reese - now a member of the corporate crime syndicate, "The Organization". Walker sees no difference in the two, and pursues Reese and his superiors in a series of confrontations with "The Organization", which has acquired all the trappings of a corporation, including accountants and currency-free financial transactions. Boorman interprets the clinically clean and corporate landscape of 1960s Los Angeles as an irresistible force, an overwhelming conformity that has taken hold of America's psyche, including the behavior of criminal organizations. Here even crime lords are determined to act like ordinary corporate businessmen, right down to mundane concerns over lawn care at the suburban safe house. While they remain cruel, manipulative, and greedy, they have also grown soft, and no longer personally involved in violence.

Given its new corporate persona, "The Organization" is completely baffled by Walker's fearless and single-minded determination to get both revenge and his share of the loot from Reese's new employer. The ponderous crime syndicate underestimates its lone adversary and is slow to react, an error that soon proves fatal.

This was the first film ever to shoot at , the infamous prison which had been shut down since 1963, only three years before the production.

Set primarily in and around Los Angeles, "Point Blank" combines elements of "film noir" with stylistic touches of the European "", sun-drenched scenery, psychological themes, sudden violence, complex flashbacks, rapid rhythm changes, sound effects, and Boorman's own favourite myth elements. Boorman juxtaposes issues of life and death with the mundane and commonplace to illustrate the schizophrenic nature of life in the United States in the late 1960s, as the noise of car crashes and gunshots compete with those of the television and the electric blendor. Low light levels and dark shadows of film noir are intentionally jettisoned for intense California daylight that washes out most details; even the nighttime scenes in "Point Blank" are intentionally illuminated with light, often of glaring intensity. The opening ten minutes demonstrate a menu of cinematic devices, a "measured frenzy" that continues throughout the film.

In the opening scenes, Boorman leaves open the question of Walker's survival of his gunshot wounds, and in pursuing his vengeance, it is notable that Walker is only indirectly involved in the deaths of those who injured him, as if fear and dread of Walker's ghost was causing his enemies to kill themselves and each other. Whether Walker is a real person, or merely a returning nightmare for those who have injured him, is left for the viewer to decide.

"Point Blank" was dismissed by some U.S. critics as an average action film when first released, and was heavily criticized for its level of violence in an era when action and crime genre films were being increasingly viewed as simplistic vehicles for audience exploitation. In common with many crime films of the era, the film's "Mafia"-inspired crime syndicate became politically correct ("The Organization"), losing its ominous Italian appellation, and dropping all obvious Italian names and characters (except for lower-level thugs). In her 1967 "New Yorker" review of "Bonnie and Clyde," disparaged Boorman's movie with one sentence: "A brutal new melodrama is called "Point Blank", and it is."

With the passage of time, the film is today considered a neo-noir classic. Boorman's combination of "film noir" elements with the amorality of a bleached L.A. landscape has worn well over the years, the picture seeming to epitomize a the stark urban mood of the late-1960s. Its central focus on timeless themes of revenge, jealousy, and greed stand in contrast to trendier films of the era that focused almost entirely on the more trivial aspects of the decade's social and fashion trends, only to become quickly dated and irrelevant. David Thomson praises the film: "Point Blank" is a masterpiece... iconographic... urban thriller... a crucial film in the development of cinema's portrait of... organized crime."Fact|date=February 2007 And even Kael amended somewhat her earlier critique to later call "Point Blank" "intermittently dazzling".

The recent release of the movie on DVD has again given the film new life. "Slant Magazine" reviewer Nick Schager notes in a 2003 review: "What makes "Point Blank" so extraordinary, however, is not its departures from genre conventions, but Boorman's virtuoso use of such unconventional avant-garde stylistics to saturate the proceedings with a classical noir mood of existential torpor and romanticized fatalism." [cite web|url=http://www.slantmagazine.com/film/film_review.asp?ID=741|title=Point Blank|last=Schager|first=Nick|accessdate=2007-09-21|publisher=]

"Point Blank" was loosely remade as the Hong Kong action film "" (1992). It was remade again in Hollywood as "Payback" (1999). Outside the US, "Payback" was distributed by , which acquired the rights to "Point Blank" through its 1996 merger with , which owns the pre-1986 MGM library.