"Bart vs. Australia" is the sixteenth episode of the sixth season of The Simpsons. It originally aired on the Fox network in the United States on February 19, 1995.[3] In the episode, Bart is indicted for fraud in Australia, and the family travels to the country so Bart can apologize. The Australian Parliament decides to give him the additional punishment of a boot to his buttocks, but the Simpson family refuses. Bart later changes his mind and agrees to the punishment, but just as he is about to receive it, he moons the Australians and the family flees back to America.

The episode was written by Bill Oakley and Josh Weinstein and directed by Wes Archer. It features cultural references to films such as Mad Max 2 and Crocodile Dundee. "Bart vs. Australia" acquired a Nielsen rating of 9.1 and was the fourth highest rated show on the Fox network the week it aired. It received mixed reception in Australia, with some Australian fans saying the episode was a mockery of their country.

While in the bathroom, Bart notices that the water in the sink always drains counterclockwise. Lisa explains that the water never drains the other way except in the southern hemisphere, due to the Coriolis effect, but Bart does not believe her. To confirm this, Bart makes phone calls to various countries in the southern hemisphere. Lisa points out how expensive international calls are, so Bart decides to make a collect call instead. He calls Australia, where a little boy answers the phone. Pretending to represent the "International Drainage Commission", Bart is informed that the toilet and sink are both draining clockwise. Frustrated, Bart asks him to go and check the toilets of the neighbors. The call takes six hours to complete, since the boy lives in the outback, and Bart forgets to hang up the phone. Later, the boy's father is billed A$900. The father calls Bart and demands that he pay, but Bart only taunts him. Unfortunately for Bart, the father's neighbour is a federal Member of Parliament, who reports Bart's offense to the Prime Minister—who is relaxing in a nearby pond.

After a long series of ignored letters, Australia indicts Bart for fraud. The United States Department of State wants to send him to prison in order to placate the Australian government, but Marge furiously objects to this idea. The State Department then settles on having Bart publicly apologize in Australia. The family is sent to Australia and they stay in the American Embassy, which is fitted with all the comforts of their home country, including a specially modified toilet that overcomes an exaggerated Coriolis effect. Then they start exploring the local culture.

After Bart makes his apology, the parliament reveals that they want to give him the additional punishment of a "booting", which is a kick in the buttocks using a giant boot. Bart and Homer escape and the family flees to the American Embassy. After a prolonged standoff, the two governments propose a compromise to the Simpson family: one kick from the Prime Minister, through the gate of the embassy, with a regular shoe, believed to be a wingtip. Marge is opposed to the idea, but Bart agrees. However, Bart dodges the kick, moons the Australians with the words "don't tread on me" written on his buttocks, then hums "The Star-Spangled Banner". The Simpson family flee the outraged country in a helicopter. Looking down on Australia, they see that bullfrogs have begun to overpopulate and destroy the Australian ecosystem, due to a bullfrog Bart left earlier at the airport. Viewing the devastation, the family remark upon the destruction that can be caused by introducing a foreign species into a new environment, and laugh at the Australians' misfortune, unaware that a koala is hanging onto the helicopter. The camera repeatadly zooms in on the koala, ending with a close-up of its eye, implying that America will face a similar fate to Australia.

The episode was written by Bill Oakley and Josh Weinstein, and directed by Wes Archer.[4] The writing staff wanted to do an episode where the Simpsons family traveled to Australia, because they thought everyone in Australia had a good sense of humor and that they "would get the jokes".[5] The staff had previously poked fun at several American institutions on the show and they thought it would be interesting to poke fun at a whole nation.[6] They designed Australia and the Australian people very inaccurately and many things were completely made up for fun.[4] The animators, however, got two Australian tourist guides to help them out with the design of the Australian landscape and buildings, as well as the American Embassy.[6] The writers did research on the Coriolis effect for this episode.[4] Lisa's explanation of the effect is incorrect; it affects global weather patterns and is caused by the spinning of the globe on its axis. The amount of water in a toilet or sink is much too small to be affected by it.[7]

In 1999, Fox Studios Australia in Sydney used a different version of "Bart vs. Australia" as part of their Simpsons attraction, called The Simpsons Down Under. They had contacted the Simpsons writing staff and asked if they would write the screenplay for a ride in their attraction, based on this episode.[6] The episode was re-edited and re-animated for the ride and new scenes were included.[6] The attraction featured motion capture technology, allowing audience members faces and expressions to be transformed into moving cartoon characters.[8][9] 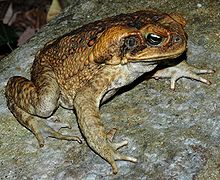 The bullfrogs taking over Australia in the episode and destroying all the crops is a reference to the cane toad that became a pest in Australia.

The plot of the episode is based on the story of Michael Fay, an American teenager who was caned in Singapore in 1994 for vandalizing cars.[4][10] This episode perpetuated a popular myth that the Coriolis effect affects the motion of drains in the Northern and Southern Hemispheres.[6] In reality, the Coriolis effect affects global weather patterns. The amount of water in a toilet or sink is much too small to be affected by it.[11]

When Bart is talking to the boy's father on the phone he says "I think I hear a dingo eating your baby", referencing the case of Azaria Chamberlain, a ten-week-old baby who was believed to be eaten by dingoes.[12] The bullfrogs taking over Australia and destroying all the crops is a reference to the cane toad, originally introduced to Australia in order to protect sugar canes from the cane beetle, but became a pest in the country.[4]

When the Simpson family go to an Australian pub, Bart plays with a pocketknife at the table and a man asks him: "You call that a knife?", and as the man draws a spoon from his pocket he says: "This is a knife." The scene is a reference to a famous scene from Crocodile Dundee in which Mick Dundee is threatened by some thugs with a switchblade, and Mick takes out a bowie knife and says; "That's not a knife, this is a knife!"[6] The Simpson family is shown a slide show by the US Department of State depicting a boarded up cinema with a sign out the front saying "Yahoo Serious Festival", in reference to the Australian actor and director Yahoo Serious.[2][13] Wez, one of the characters from the 1981 film Mad Max 2: The Road Warrior, is seen in the Australian mob that chases Bart and Homer to the American Embassy.[14]

In its original American broadcast, "Bart vs. Australia" finished 56th in the ratings for the week of February 13–19, 1995, with a Nielsen rating of 9.1.[15] It was the fourth highest rated show on Fox that week.[15] The episode has since become study material for sociology courses at the University of California, where it is used to "examine issues of the production and reception of cultural objects, in this case, a satirical cartoon show", and to figure out what it is "trying to tell audiences about aspects primarily of American society, and, to a lesser extent, about other societies."[16]

Since airing, the episode has received positive reviews from fans and television critics. In a DVD review of the sixth season, Ryan Keefer said "all the Australian jabs you expect to have here are present. Bart's international incident is hilarious, from top to bottom. The phone calls he makes to other countries (particularly Buenos Aires) are fantastic. This is one of the more under appreciated episodes in the series' run."[17] Vanity Fair named it the second best episode of The Simpsons in 2007.[18] "Bart vs. Australia" was also nominated for an Emmy Award in 1995 in the category "Outstanding Individual Achievement in Sound Mixing for a Comedy Series or a Special".[19] 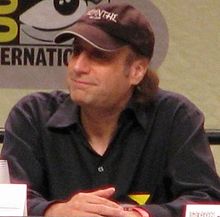 David Mirkin dismissed the criticism and said it was intentional by the staff to make the portrayals of Australia very inaccurate.

The Newcastle Herald's James Joyce said he was shocked when he first saw the episode: "Who are the Americans trying to kid here? I agree Australia has its faults, as does any other country. But laughing in our face about it, then mocking our heritage was definitely not called for. It embarrassed and degraded our country as well as making us look like total idiots".[13] Warren Martyn and Adrian Wood, the authors of the book I Can't Believe It's a Bigger and Better Updated Unofficial Simpsons Guide, advised that the episode is "best if watched with Australians who will be, perhaps understandably, aggrieved at their portrayal. After the attack on the French, this is a vicious, unkind, offensive and wonderfully amusing slaughter of Australian culture by the makers of The Simpsons".[2]

The Simpsons executive producer David Mirkin, who produced the episode, responded to the criticism in an interview with The Newcastle Herald by saying: "We like to have the Simpsons, the entire family, travel and this was the beginning of that. Australia was a fantastic choice because it has lots of quirky visual things. And it's a country that is really very close to America, very in sync with America. We are so similar but yet there are all these fantastic differences, familiar yet twisted. It was intentional to make it very inaccurate. That was our evil side coming out: We'll take our knowledge of Australia and we'll twist it around to stimulate an audience and annoy them at the same time".[13] Despite being criticized for mocking the country, the episode received positive reviews from Australians too. Jim Schembri of the Australian newspaper The Age named it the funniest episode ever.[21]