In the event, the Review Court was not ready when it was first needed.[1] Peter Brownback and Keith J. Allred, the officers appointed to serve as Presiding Officers in the Military Commissions that charged Omar Khadr and Salim Ahmed Hamdan dismissed the charges against the two men because the Military Commissions Act only authorized the commissions to try "unlawful enemy combatants".[2][5][5][6] Khadr and Hamdan, like 570 other Guantanamo captives had merely been confirmed to be "enemy combatants".

The Court of Military Commission Review ruled that Presiding Officers were, themselves, authorized to rule whether suspects were "illegal enemy combatant".[7][8][9] 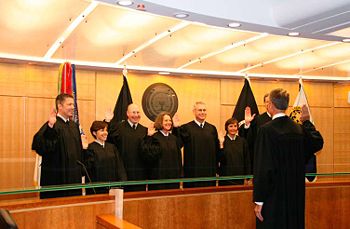 Current judges on the panel include:[10]

Stephen R. Henley the Presiding Officer in United States v. Mohamed Jawad had ruled that evidence that was the result of torture could not be used.[12] On February 9, 2009, three judges from the Court, Frank J. Williams, Dan O’Toole, and D. Francis were empaneled to consider whether they should comply with the President's Executive Order halting all their proceedings.[11]

On January 22, 2009, United States President Barack Obama issued Executive Order 13492 ordering the closure of the Guantanamo Bay detention camps, within one year.[13] That order halted all proceedings before the Court of Military Commission Review.

Appeal of the verdict of Ali Al Bahlul's military commission

Carol Rosenberg, writing in the Miami Herald, reported that Ali Al Bahlul's military defense attorneys filed a fifty page appeal of his sentence on free speech grounds on September 2, 2009.[14][15] They claimed his production of al Qaeda propaganda material was protected by the first amendment of the United States Constitution.

"Mr. al Bahlul is not a sympathetic defendant. He embraces an ideology that glorifies violence, justifies terrorism and opposes constitutional democracy. As offensive as it may be, [Bahlul's film work] is speech that falls within the core protections of the First Amendment, which forbids the prosecution of `the thoughts, the beliefs, the ideals of the accused."

Attorney's working on behalf of Salim Hamdan have appealed his conviction, and oral arguments were heard on January 26, 2010.[16] Hamdan has already finished serving his sentence.

Carol Rosenberg, writing in the Miami Herald, reported that the Obama Presidency has proposed a change in where appeals of the rulings and verdicts of military commissions would be heard.[14] The proposed changes would have them first heard by the Court of Appeals for the Armed Forces, which Rosenberg noted was a 58-year-old institution. In the current set-up there is no appeal to rulings of the Court of Military Commission Review. Under the proposed changes appeals could be taken to the United States Supreme Court.