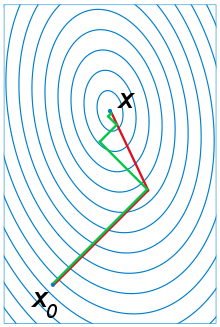 A comparison of the convergence of gradient descent with optimal step size (in green) and conjugate vector (in red) for minimizing a quadratic function associated with a given linear system. Conjugate gradient, assuming exact arithmetic, converges in at most n steps where n is the size of the matrix of the system (here n=2).

In mathematics, the conjugate gradient method is an algorithm for the numerical solution of particular systems of linear equations, namely those whose matrix is symmetric and positive-definite. The conjugate gradient method is an iterative method, so it can be applied to sparse systems that are too large to be handled by direct methods such as the Cholesky decomposition. Such systems often arise when numerically solving partial differential equations.

The conjugate gradient method can also be used to solve unconstrained optimization problems such as energy minimization. It was developed by Hestenes and Stiefel.[1]

Description of the method

Suppose we want to solve the following system of linear equations

We denote the unique solution of this system by x*.

The conjugate gradient method as a direct method

Since A is symmetric and positive definite, the left-hand side defines an inner product

Suppose that {pk} is a sequence of n mutually conjugate directions. Then the pk form a basis of Rn, so we can expand the solution x* of Ax = b in this basis:

The coefficients are given by

This result is perhaps most transparent by considering the inner product defined above.

This gives the following method for solving the equation Ax = b: find a sequence of n conjugate directions, and then compute the coefficients αk.

The conjugate gradient method as an iterative method

If we choose the conjugate vectors pk carefully, then we may not need all of them to obtain a good approximation to the solution x*. So, we want to regard the conjugate gradient method as an iterative method. This also allows us to solve systems where n is so large that the direct method would take too much time.

We denote the initial guess for x* by x0. We can assume without loss of generality that x0 = 0 (otherwise, consider the system Az = b − Ax0 instead). Starting with x0 we search for the solution and in each iteration we need a metric to tell us whether we are closer to the solution x* (that is unknown to us). This metric comes from the fact that the solution x* is also the unique minimizer of the following quadratic function; so if f(x) becomes smaller in an iteration it means that we are closer to x*.

This suggests taking the first basis vector p1 to be the negative of the gradient of f at x = x0. This gradient equals Ax0−b. Since x0 = 0, this means we take p1 = b. The other vectors in the basis will be conjugate to the gradient, hence the name conjugate gradient method.

Let rk be the residual at the kth step:

The conjugation constraint is an orthonormal-type constraint and hence the algorithm bears resemblance to Gram-Schmidt orthonormalization.

This gives the following expression:

(see the picture at the top of the article for the effect of the conjugacy constraint on convergence). Following this direction, the next optimal location is given by

where the last equality holds because pk+1 and xk are conjugate.

The above algorithm gives the most straightforward explanation towards the conjugate gradient method. However, it requires storage of all the previous searching directions and residue vectors, and many matrix vector multiplications, thus could be computationally expensive. In practice, one modifies slightly the condition obtaining the last residue vector, not to minimize the metric following the search direction, but instead to make it orthogonal to the previous residue. Minimization of the metric along the search direction will be obtained automatically in this case. One can then result in an algorithm which only requires storage of the last two residue vectors and the last search direction, and only one matrix vector multiplication. Note that the algorithm described below is equivalent to the previously discussed straightforward procedure.

The algorithm is detailed below for solving Ax = b where A is a real, symmetric, positive-definite matrix. The input vector x0 can be an approximate initial solution or 0.

if rk+1 is sufficiently small then exit loop end if

end repeat
The result is xk+1

This is the most commonly used algorithm. The same formula for βk is also used in the Fletcher–Reeves nonlinear conjugate gradient method.

To illustrate the conjugate gradient method, we will complete a simple example.

Considering the linear system Ax = b given by

in order to find an approximate solution to the system.

Our first step is to calculate the residual vector r0 associated with x0. This residual is computed from the formula r0 = b - Ax0, and in our case is equal to

Since this is the first iteration, we will use the residual vector r0 as our initial search direction p0; the method of selecting pk will change in further iterations.

We now compute the scalar α0 using the relationship

We can now compute x1 using the formula

This result completes the first iteration, the result being an "improved" approximate solution to the system, x1. We may now move on and compute the next residual vector r1 using the formula

Our next step in the process is to compute the scalar β0 that will eventually be used to determine the next search direction p1.

Now, using this scalar β0, we can compute the next search direction p1 using the relationship

We now compute the scalar α1 using our newly-acquired p1 using the same method as that used for α0.

Finally, we find x2 using the same method as that used to find x1.

The result, x2, is a "better" approximation to the system's solution than x1 and x0. If exact arithmetic were to be used in this example instead of limited-precision, then the exact solution would theoretically have been reached after n = 2 iterations (n being the order of the system).

to the exact solution, which may reach the required tolerance after a relatively small (compared to the problem size) number of iterations. The improvement is typically linear and its speed is determined by the condition number κ(A) of the system matrix A: the larger is κ(A), the slower the improvement [2] .

If κ(A) is large, preconditioning is used to replace the original system

if rk+1 is sufficiently small then exit loop end if

end repeat
The result is xk+1

In numerically challenging applications, sophisticated preconditioners are used, which may lead to variable preconditioning, changing between iterations. Even if the preconditioner is symmetric positive-definite on every iteration, the fact that it may change makes the arguments above invalid, and in practical tests leads to a significant slow down of the convergence of the algorithm presented above. Using the Polak–Ribière formula

instead of the Fletcher–Reeves formula

may dramatically improve the convergence in this case.[3] This version of the preconditioned conjugate gradient method can be called[4] flexible, as it allows for variable preconditioning. The implementation of the flexible version requires storing an extra vector. For a fixed preconditioner,

so both formulas for βk are equivalent in exact arithmetic, i.e., without the round-off error.

The mathematical explanation of the better convergence behavior of the method with the Polak–Ribière formula is that the method is locally optimal in this case, in particular, it converges not slower than the locally optimal steepest descent method.[5]

In both the original and the preconditioned conjugate gradient methods one only needs to always set βk: = 0 in order to turn them into locally optimal, using the line search, steepest descent methods. With this substitution, vectors

are always the same as vectors

, so there is no need to store vectors

. Thus, every iteration of these steepest descent methods is a bit cheaper compared to that for the conjugate gradient methods. However, the latter converge faster, unless a (highly) variable preconditioner is used, see above.

Derivation of the method

The conjugate gradient method can be derived from several different perspectives, including specialization of the conjugate direction method for optimization, and variation of the Arnoldi/Lanczos iteration for eigenvalue problems. Despite differences in their approaches, these derivations share a common topic—proving the orthogonality of the residuals and conjugacy of the search directions. These two properties are crucial to developing the well-known succinct formulation of the method.

Conjugate gradient on the normal equations

As an iterative method, it is not necessary to form ATA explicitly in memory but only to perform the matrix-vector and transpose matrix-vector multiplications. Therefore CGNR is particularly useful when A is a sparse matrix since these operations are usually extremely efficient. However the downside of forming the normal equations is that the condition number κ(ATA) is equal to κ2(A) and so the rate of convergence of CGNR may be slow and the quality of the approximate solution may be sensitive to roundoff errors. Finding a good preconditioner is often an important part of using the CGNR method.

Several algorithms have been proposed (e.g., CGLS, LSQR). The LSQR algorithm purportedly has the best numerical stability when A is ill-conditioned, i.e., A has a large condition number.

The conjugate gradient method was originally proposed in

Descriptions of the method can be found in the following text books: