Ordinal utility theory states that while the utility of a particular good or service cannot be measured using a numerical scale bearing economic meaning in and of itself, pairs of alternative bundles (combinations) of goods can be ordered such that one is considered by an individual to be worse than, equal to, or better than the other. This contrasts with cardinal utility theory, which generally treats utility as something whose numerical value is meaningful in its own right.

When a large number of bundles of goods are compared, the preferences of the individual can be seen. This information is usually put together on a graph called an indifference map. One of these is shown below: 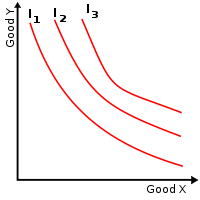 Each indifference curve is a set of points, each representing a combination of quantities of two goods or services, all of which combinations the consumer is equally satisfied with. The further a curve is from the origin, the greater is the level of utility. The slope of the curve (the negative of the marginal rate of substitution of X for Y) at any point shows the rate at which the individual is willing to trade off good X against good Y maintaining the same level of utility. The curve is convex to the origin as shown assuming the consumer has a diminishing marginal rate of substitution. It can be shown that consumer analysis with indifference curves (an ordinal approach) gives the same results as that based on cardinal utility theory — i.e., consumers will consume at the point where the marginal rate of substitution between any two goods equals the ratio of the prices of those goods (the equi-marginal principle).

An ordinal utility function describing a consumer's preferences over, say, two goods can be written as

where x and y are the quantities of the goods consumed. Both partial derivatives of this function are positive if the consumer prefers more of both goods. But the same preferences could be expressed as another utility function that is a monotonic transformation of u: