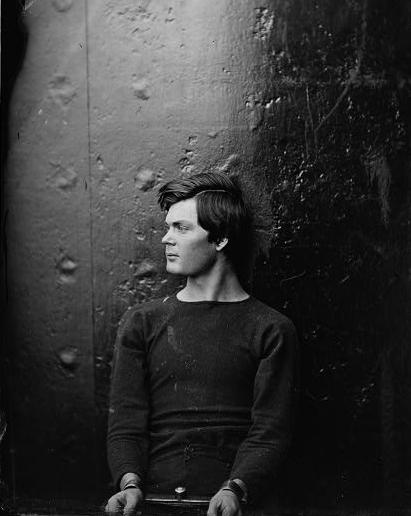 Lewis Thornton Powell (, &ndash; , ), also known as Lewis Paine or Payne, attempted unsuccessfully to assassinate , and was one of four people hanged for the conspiracy.

Lewis Powell was born in on , 1844 to a Baptist minister, George Cader, and his young wife Patience Caroline Powell. The youngest of ten children, he spent the first three years of his life in Randolph County before his father was ordained and the family moved to Stewart County, Georgia. Powell and his siblings were all educated by their father who was the school master at the school. In his early years, Lewis is described as quiet and introverted. He enjoyed reading and studying. An animal lover who took the liberty to nurse and care for sick and stray animals, he earned the nickname 'Doc'. When Lewis was 13, he was violently kicked in the face by the family's donkey, breaking his jaw. The break healed, making his jaw more prominent on the left side of his face. After some years in Stewart County, the family moved to Worth County, then finally moving to Live Oak, Florida in 1859, when Lewis was 15. On , 1861 at age 17, Lewis left home and enlisted in the , Company I. He went on to fight at numerous battles unscathed before being wounded in the wrist on the second day of fighting at the , July 2, 1863. Lewis was captured and sent to a POW hospital at Pennsylvania College where he was kept until September, when he was transferred to West Buildings Hospital in , Maryland. It was at West Buildings where Powell met and developed a relationship with a volunteer nurse named Margaret "Maggie" Branson. It was with the help of Branson that Lewis was able to escape the hospital within a week of his arrival, fleeing to Alexandria, Virginia.

Back in Virginia, Powell tried to locate the 2nd Florida, but to no avail. He did however locate Col. and his cavalry in late fall 1863 and rode with the 43rd Battalion, Company B. After leaving the company, he returned to Baltimore on January 13, 1865, crossing the lines at Alexandria. Powell returned to the boarding house of Maggie Branson. During his time with the rangers, in 1864, Powell became involved in the . It was in Baltimore that he was arrested for severely beating a black servant at the Branson house. He was arrested and held in jail 2 days on charges of being a "spy". Required to sign an Oath of Allegiance, he did so, under the name Lewis Paine. It was also in Baltimore that he met fellow CSS operative through a man named , also with the CSS.

On December 23, 1864, Lewis Powell was walking the streets of Washington with , when they came around a corner and Surratt recognized his friend walking with a man. Mudd hailed his friend, and the two parties converged on the sidewalk. Mudd introduced to Surratt, and Surratt introduced Powell to Booth and Mudd. Booth then offered that the men return to his hotel room for drinks and cigars. It was in his hotel room that he enlisted the men into his plot to kidnap the President, which they attempted to do on March 17, 1865, to no avail. After the failed attempt, Lewis lost contact with his friends, and drifted around Washington. Then in April, he was contacted by Booth again, this time to be enlisted in a plot to kill the President and his cabinet. On April 13, Booth, and all met at Powell's room at a boarding house in Washington, where Booth assigned roles. Powell was to go to the home of Secretary of State and kill him, accompanied by Herold. Atzerodt would assassinate Vice President Johnson, and Booth; Abraham Lincoln.

After being escorted to the Seward residence by , Powell attempted to kill William Seward on , (the same night that assassinated ) by breaking into his bedroom and stabbing him repeatedly. Earlier in the month, on , , Seward had been injured in a carriage accident, and suffered a concussion, a broken jaw, a broken right arm, and many serious bruises. A jaw splint worn by Seward helped to save his life by deflecting the knife away from his vein. Four other people were injured in the attack. Another member of the conspiracy, , failed to kill Vice-President , because he lost his nerve and got drunk.

Powell was tried under the name of "Payne" by a and was executed with three other conspirators on , . He went to the gallows calmly and quietly, though at some point he was believed to have pleaded for the life of shortly before he was hanged. His spiritual advisor, Rev. Gillette, thanked the guards for their good treatment of him while he was in prison, on his behalf. He insisted to his death that Mrs. Surratt was innocent.

While hangman Christian Rath was placing the noose over young Powell's head he remarked, "I hope you die quick." He had been impressed by Powell's courage and determination in the face of death. To this Powell replied, "You know best, captain." However Powell did not die quickly as hoped by Rath. After the drop he struggled for life more than five minutes. His body swinging wildly, twice he "Moved his legs up into the sitting position" and was the last to die. died instantly with a broken neck. gave a brief shudder and wet himself. , whose neck did not break upon impact, also shuddered for several minutes before dying.

In January 1992, Powell's skull was discovered and stored at the Anthropology Department. Two years later the skull was re-interred with the rest of his remains at the in , next to the grave of his mother.Fact|date=February 2007