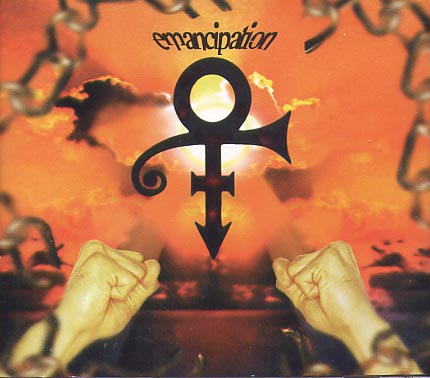 "Emancipation" is a 1996 triple-CD by Prince (then known by his symbolic alias, see album art). The title refers to Prince's freedom from his contract with , with whom he had a contentious relationship. The album was Prince's third to be released that year (along with "" and "Girl 6"), making 1996 one of the most prolific years for material released by Prince.

"Emancipation" is somewhat of a , celebrating his release from Warner Bros. as well as his marriage to , who became his wife on earlier that year. With his newfound creative freedom, Prince experimented more openly with varying genres, including house, and . Prince also freely commented on his fame and dealings with Warner Bros. ("White Mansion"; "Slave"; "Face Down") while also returning slightly to the "computer" theme he explored a decade earlier ("Emale"; "My Computer".)

Expecting a child, Prince wrote several songs and ballads for Mayte, most of which appear on the second disc of the album. Unfortunately, the child, born after the album's release, suffered with Pfeiffer syndrome type 2, a rare skull disease, and died shortly after birth. Prince and Mayte divorced in . A recording of the child's heartbeat is featured as part of the percussion of "Sex in the Summer".

The album is notable for its format: it consists of three discs, each containing 12 songs with nearly an hour of music per disc. Prince insinuated to the press at the time that the number of songs, discs and length of the album had a connection with the . There was also an alleged connection with the symbolic moniker, with Prince explaining that this was the "album he was born to make". The lengthy liner notes are filled with quotes and hidden messages, along with images illustrating the songs and overall album concepts.

In the U.S., the album debuted at #11. Though not a major seller, it did sell over 500,000 copies, and being three discs, it was qualified to being certified double platinum (the certifies based on amount shipped rather than sold). The resulting Jam of the Year Tour was a major success (though ironically very few songs from "Emancipation" were included in the concerts), resulting in a significant comeback for Prince, after the commercial and critical disappointment of "" from earlier that year.In all, "Emancipation" is the fourth best-selling triple album in the .