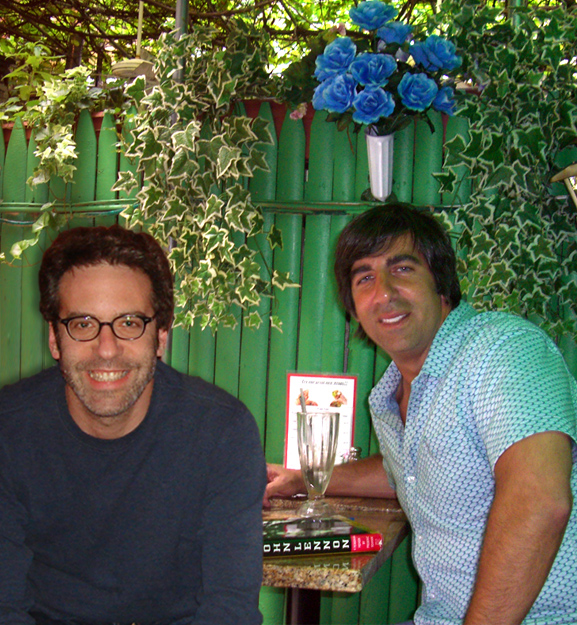 The Red Button is an American pop band consisting of and Mike Ruekberg. Swirsky is a well-known pop songwriter,

Swirsky's music credentials include hit songs for dozens of artists, including ("Instant Pleasure"), , and ("Tell it to My Heart" and "Prove Your Love") among many others.

In the 1990s, Ruekberg worked as a and for the -based pop-rockers Rex Daisy, who recorded a CD for with producer . Ruekberg also wrote the soundtrack for the indie cult film classic "Dummy," starring .

Swirsky and Ruekberg met in 2005, when Swirsky was recording his first solo album, "". The two hit it off immediately, both of them admiring each other's songs. Shortly thereafter, they decided to begin writing and recording songs together. They found that Swirsky's tuneful optimism balanced nicely with Ruekberg's pessimistic, but passionate style. "She's About to Cross My Mind" is the result of those sessions.

In a year-end poll of the top pop records of the year, "She's About to Cross My Mind" was ranked #1 (out of 125) by the influential pop site, Absolute Powerpop.In ranking it #1, the editor said: "While some may cynically refer to the entire power pop genre as an effort to remake or or , this is one disc that deserves to be called an equal to its forebears." Prominent pop music journalist and author of "Shake Some Action: The Ultimate Power Pop Guide", John Borack ranked "She's About to Cross My Mind" #1 in his Top 20 Best Albums of 2007 saying that The Red Button's songs were created “the way God and Paul McCartney must have intended.” . Pop Journalist and International Pop Overthrow founder David Bash ranked the album #8 (out of 125) in his influential year-end list saying: "Swirsky and Ruekberg can now wear their rightful crown as the Peter Holsapple/ Chris Stamey of The New Millennium”, referring to the best of the highly regarded Beatles-influenced tunesmiths of the 80s and 90s.

The CD was also ranked the "Top of the Pops - Overall Best of 2007" by VillageRecords.com,

PopGarden Radio, in their 2007 year-end poll ranked "I Could Get Used to You", a song from the album, as the #1 Song of the Year.

Swirsky appeared as the featured guest on the late night show Red Eye with Greg Gutfeld on discussing The Red Button album as well as his not-yet-released documentary, Beatles Stories.

The Red Button played an acoustic set, their first appearance, at The International Pop Overthrow Music Festival at , in on .