Jak 3 is a platform game for Sony's PlayStation 2 console developed by Naughty Dog. It is the third game in the main Jak and Daxter series. Jak 3 was completely localized and dubbed in Japanese, but was not released in Japan due to Jak II's poor sales. Japanese, however, is selectable on the Korean release of the game and will play on a Japanese PlayStation 2.

Like its predecessors, Jak 3 takes place in an un-named fictional universe created by Naughty Dog specially for the games. Specifically, it is set in the New World, its time frame placing it around 300 years after the events of the first game. Jak 3 largely focuses on the Wasteland, a large desert only briefly referred to in the previous entry in the series as being completely uninhabited and inhospitable.

Spargus City, a large settlement within the Wasteland bordering the ocean, is where the game officially begins, and serves as a hub for the player, where new weapons and upgrades can be earned, and most missions are given out. Later on, the plot shifts focus to Haven City, a sprawling metropolis which was the central locale in Jak II, though the size of the area is only a fifth of the Wasteland.[1] Some levels from the previous game are radically altered (Haven Forest, Metropolitan area) or removed entirely (like the Arena, Bazaar, and farm district in Haven City), while others are added (New Haven City), branching off from Spargus and the Wasteland and Haven.

As in the games before it, Jak 3's two main protagonists are Jak and his best friend Daxter the 'ottsel', which is a fictional cross between an otter and a weasel. Jak's mechanic friend Keira returns in this game. There is also Ashelin, the Governor of Haven City, who was previously involved with Torn, the now-commander of the Freedom League. Daxter's love interest Tess returns as a weapons designer; and Keira's father, Samos, also makes appearances through the game.

A new character, Damas, is first introduced here. He is the king of Spargus City. More minor but returning characters include Sig, a spy of Damas back in Haven City who later becomes the new king of Spargus after Damas, and Pecker, Onin's translator from Jak 2 becomes adviser to Damas in the early parts of the game.

Few of the original antagonists from Jak II reappear in this game. A new secondary villain is Count Veger, a self-absorbed Haven City aristocrat who banishes Jak to the wasteland at the beginning of the game. The player later finds that Veger wishes to journey to the core of the planet and gain the power of the Precursors. Even as he attempts this, a species known as the Dark Makers begin to invade the planet, seeking to destroy it. The Dark Makers are Precursors who have been corrupted by Dark Eco, similar to the antagonists of The Precursor Legacy.

The main antagonist is the former Krimzon Guard commander Erol, first introduced in Jak II, renamed Errol. He is a cybernetic version of himself, as he was badly wounded in Jak II when he crashed into a supply of Eco barrels trying to run over Jak after he won the class one race. Sometime before the start of this game, he restarts the manufacturing of newer Krimzon Guard Deathbots, whose original factory was shut down during the events of the previous game. Errol launches a war against Haven City in tandem with the remaining Metal Head monsters, and later forges an alliance with the Dark Makers. He obtains a massive Dark Maker terraforming robot at the end of the game, with which he attempts to destroy the planet. The Terraformer is then destroyed by Jak as it advances through the Wasteland towards Spargus City.

The game opens with Jak being banished to the Wasteland for life by Count Veger for supposed "crimes" against the people of Haven City. As he (along with Daxter and Pecker, who decided to join him) begins to succumb to the heat of the desert, a flashback shows Haven being under a mass attack by Metal Heads. Contrary to Torn's theory in the previous game, the destruction of the Metal Head Leader did not wipe out all the Metal Heads. Also, the Krimson Guard's special force of "K.G. Robots" went rogue and began attacking Haven citizens, leaving the city divided into 3 territories. The Palace is then destroyed by an unknown side. As Jak, Daxter, and Pecker start to die, they are rescued by a group of desert-dwellers, who take them back to Spargus City.

Upon their arrival in Spargus, Damas, the king, demands that Jak serve him in return for allowing Jak to remain in the city and to repay the debt for saving his life. In their time there, Pecker becomes Damas' royal adviser, and also learns that their longtime friend Sig was actually a spy from Spargus. They also become connected to a Precursor Monk temple, where Jak receives many new powers, and learn from a monk named Seem of a foretold destruction of the planet. During one of Damas' missions, Jak is found by Ashelin, who begs him to come back to Haven City to defend it from the Metal Heads and the new Krimzon Guard Deathbots. Still embittered about being exiled, he refuses to return. Ashelin leaves him, but later, Jak changes his mind and makes the journey via transport to Haven City. Jak and Daxter help reunite the Freedom League and give them hope that they can beat back the Metal Heads and KG Deathbots. While at the Naughty Ottsel, the new temporary HQ for the resistance, they receive a transmission from Errol, now a cyborg due to an explosion in the previous game, saying that he corrupted the K.G. Robots to use them to destroy the resistance, and secure his plans to dominate Haven City.

Partway through the game, Jak and Daxter start to encounter strange creatures. A Precursor telescope in the forest of Haven City reveals that the beings are Dark Makers, who were once Precursors, but exposure to Dark Eco transformed them into twisted beings. Jak finds that a purple star in the sky is actually a Dark Maker space ship, and it is nearing the planet. The only way to stop the ship is to activate the planetary defense system situated at the core of the planet. During an attack on the Krimson Guard War Factory, Jak finds Errol, who boasts of his new strength and his body. It's also revealed that Errol is the one calling the Dark Makers. Jak destroys the KG War Factory, but Errol manages to escape. Jak tracks down Errol again at the Metal Head Nest Tower, where Errol is once again able to escape before the tower collapses. With the general containment and victory over the Metal Heads and Deathbots in Haven City, Jak and Daxter begin their trek to the Planet Core.

They are aided by Damas, who helps them break through the Metal Head territories. Damas is killed in the attack, and with his dying breath he unintentionally reveals that he is Jak's father (Damas never knowing Jak is his son); he also reveals that Jak's true name is Mar, the name of the founder of Haven City. They are then ambushed by Count Veger, who then tells Jak that he was the one who took him from Damas hoping to use his eco powers for his experiments but then lost him to the underground in the last game. Count Veger then begins a race with Jak and Daxter down to the planetary core. But at gunpoint, Veger forces Jak away, while he absorbs the Precursor's powers. Then, the actual Precursors come to reveal that they are Ottsels like Daxter. Veger is then detained by The Precursors, and he is turned into an Ottsel. Jak and Daxter are then teleported to the Dark Maker Ship to slow it down while the planetary defense system charges. The mission is a success, but Errol, who boarded the ship using a Warp-Gate, takes a Dark Maker Vehicle and pilots it down to the planet's surface. Jak follows, and after a battle, Jak takes one last shot into the cockpit of the robot, destroying the robot.

After a celebration in Spargus City, the Precursors bid farewell to the planet and go out into the universe to combat the Dark Makers. Jak is offered a place in their ranks, but he declines.[2] 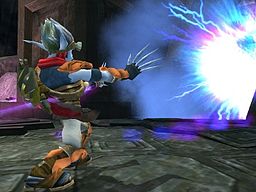 Like its predecessor, the gameplay of Jak 3 is a blend of platforming, driving, and gun combat.[3] The player is led through the story as they complete missions, assigned by the various characters in the game. Missions can consist of anything from defeating particular enemies, reaching a specific location, or completing a puzzle. With the exception of timed or otherwise linear missions, the player is free to explore the game world as they see fit. Special machines set up around the levels also assign short, non-plot-related tasks; for some significant missions, guns are a reward for completing the task. Precursors can be found in mysterious places, not after completing missions.

Cheats, made available as the player progresses, can upgrade weapons, flip the game world around into a mirror image of itself, or grant the player invincibility.[4] After the game has been completed, the Hero Mode option is made accessible, which, when purchased, allows the player to re-play the game at a harder difficulty level. As Precursor Orb count is not reset, and the orbs are regenerated at their original locations, the player is able to regather orbs that he or she had already collected the previous time they played through the game. Collecting all 600 Precursor Orbs has some cosmetic effects on Jak's appearance, but has no effects other than this. In Hero Mode, Jak also keeps all twelve of his weapons.[5]

There are some differences between Jak 3 and Jak II. Most notably are the changes undergone by the Haven City environments. While Jak II provided the player with four different types of guns, Jak 3 expands on the concept with two additional modifications for each type, ending with a total of twelve weapons. Also, the 'Dark Jak' form, introduced in Jak II, which allowed the player to transform into a more powerful version of Jak, is countered by a 'Light Jak' form[6] that mainly focuses on defensive abilities. As well as the hover vehicles within Haven City, Jak can drive a variety of off-road vehicles in the desert.

Jak 3 was developed by Naughty Dog for the PlayStation 2. Jak 3 was first revealed to be in the works by one of Superplay's writers on January 8, 2004. While browsing the Naughty Dog offices, he saw early work being done with desert environments.[7] It was first announced by Sony Computer Entertainment on February 24, 2004.[8] On April 19, 2004, information was revealed about the plot and gameplay.[9] It was revealed in North America on November 9, 2004, and in Europe on November 26, 2004. On August 4, 2005 the game was added to the Greatest Hits collection.[10]