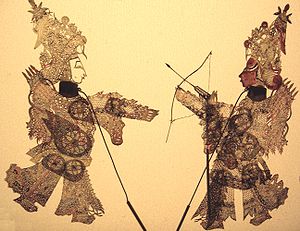 Shadow play (Chinese: 皮影戏, pí yĭng xì) or shadow puppetry Shadow puppets have a long history in China, India, Turkey and Java, and as a popular form of entertainment for both children and adults in many countries around the world. A shadow puppet is a cut-out figure held between a source of light and a translucent screen. Translucent color is sometimes introduced into the cut-out shapes to provide a different look and different effects can be achieved by moving both the puppet and the light source. A talented puppeteer can make the figures walk, dance, fight, nod and laugh. is an ancient form of storytelling and entertainment using opaque, often articulated figures in front of an illuminated backdrop to create the illusion of moving images. It is popular in various cultures. At present, more than 20 countries are known to have shadow show troupes.

Shadow puppetry originated during the Han Dynasty when one of the concubines of Emperor Wu of Han died from an illness. The emperor was devastated, and he summoned his court officers to bring his beloved back to life. The officers made a shape of the concubine using donkey leather. Her joints were animated using 11 separate pieces of the leather, and adorned with painted clothes. Using an oil lamp they made her shadow move, bringing her back to life.[1][2] Shadow theatre became quite popular as early as the Song Dynasty when holidays were marked by the presentation of many shadow plays. During the Ming Dynasty there were 40 to 50 shadow show troupes in the city of Beijing alone. In the 13th century, the shadow show became a regular recreation in the barracks of the Mongolian troops. It was spread by the conquering Mongols to distant countries like Persia, Arabia, and Turkey. Later, it was introduced to other Southeastern Asian countries.[3] The earliest shadow theatre screens were made of mulberry paper. The storytellers generally used the art to tell events between various war kingdoms or stories of Buddhist sources.[1] Today, puppets made of leather and moved on sticks are used to tell dramatic versions of traditional fairy tales and myths. In Gansu province, it is accompanied by Daoqing music, while in Jilin, accompanying Huanglong music forms some of the basis of modern opera.[3]

Chinese shadow puppetry is shown in the 1994 Zhang Yimou film To Live.

The origins of Taiwan's shadow puppetry can be traced to the Chaochow school of shadow puppet theatre. Commonly known as leather monkey shows or leather shows, the shadow plays were popular in Tainan, Kaohsiung, and Pingtung as early as the Qing dynasty (1644-1911 A.D.). Older puppeteers estimate that there were at least a hundred shadow puppet troupes in southern Taiwan in the closing years of the Qing. Traditionally, the eight to 12-inch puppet figures, and the stage scenery and props such as furniture, natural scenery, pagodas, halls, and plants are all cut from leather. As shadow puppetry is based on light penetrating through a translucent sheet of cloth, the "shadows" are actually silhouettes seen by the audience in profile or face on. Taiwan's shadow plays are accompanied by Chaochow melodies which are often called "priest's melodies" owing to their similarity with the music used by Taoist priests at funerals. A large repertoire of some 300 scripts of the southern school of drama used in shadow puppetry and dating back to the fourteenth and fifteenth centuries has been preserved in Taiwan and is considered to be a priceless cultural asset..

A number of terms are used to describe the different forms.

The show began to spread to Europe in the mid-18th century, when French missionaries in China took it back to France in 1767 and put on performances in Paris and Marseilles, causing quite a stir. In time, the Ombres chinoises (French for "Chinese Shadows") with local modification and embellishment, became the Ombres françaises and struck root in the country.

The art was a popular entertainment in Paris during the 19th century, especially in the famous nightclub district of Montmartre. The tradition in France dates back to at least the mid-18th century when it was brought back by travellers to the Orient. The puppeteer Dominique Séraphin first presented the spectacle in Paris in 1776, and in Versailles in 1781.

The cabaret Le Chat noir ("The Black Cat") produced a number of popular Ombres chinoises shows in the 1880s, organized by the artist Henri Rivière, using up to 20 assistants and a large, oxy-hydrogen back-lit performance area. The Ombres evolved into numerous theatrical productions and had a major influence on phantasmagoria.[4]

Part of the collection of the Museo del PRECINEMA, Padua

Part of the collection of the Museo del PRECINEMA, Padua

In Italy, the Museum of Precinema collezione Minici Zotti in Padua houses a collection of 70 French shadow puppets, similar to those used in the cabaret Le Chat Noir, together with an original theatre and painted backdrops, as well as two magic lanterns for projecting scenes. So far, the shadow plays identified are La Marche a l'Etoile, La Sphinx, L'Age d'Or and Le Carneval de Venise, and it is supposed that the shadow puppets were created for the tournee in France or abroad at the end of the 19th century. This is an important donation by the Fondazione Centro Studi della Barbariga.

It was claimed by Sunul Chakraborty that the ancient Indian art of storytelling with the help of pictures began with the Harappans civilization. Several Harappan seals show ancient Indian traditional folk tale in a progression of scenes. This archaeological finds prove that pat, the folk painting of Bengal, exist before the arrival of the Aryans in India. Modern Indian names: Killekyata, Killikets (these two also present shadow plays), citrakathi, c[h]itrakar, patua, patidar, pat, par, para, etc. Their ancient names were: yamapattaka, mankha, maskari, and saubhika. The latter is however very controversial, a difficult word, and much disputed among scholars. There is lack of agreement on the meaning of saubhika mentioned in the ancient texts. But the majority make out the meaning as either "picture showman" or "shadow player".[5] Shadow puppets remained popular until recently in modern India,[6] including in Andhra Pradesh and as leather puppets in Karnataka. 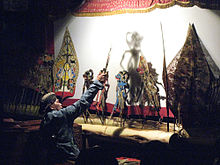 Shadow puppet theater is called Wayang kulit in Indonesia and it is particularly popular in Java and Bali. The term derived from the word wayang literally means shadow or imagination in Javanese, also connotes "spirit". While kulit means skin as the material of the puppet is the thin perforated leather sheats made from buffalow's skin.

The performances of shadow puppet theater are accompanied by gamelan in Java, and by "gender wayang" in Bali, and originally might last all night long, sometimes up to six hours or until dawn. The complete wayang kulit troupes include dalang (puppet master), nayaga (gamelan players), and sinden (female choral singer). Some of the nayaga also performed as male choral singer. The dalang (puppet master) play the wayang behind the cotton screen illuminated by oil lamp or modern halogen lamp, creating visual effects similar to animation. The thin puppet is animated by the movement of hands connected with joints manipulated through rods handle made of carved buffalow's horn. UNESCO designated Wayang Kulit from Indonesia as one of the Masterpieces of the Oral and Intangible Heritage of Humanity on November 7, 2003.

In Malaysia, shadow puppet plays are also known as wayang kulit. In Malay, Wayang means shadow or imagination, while Kulit means skin and refers to the leather that puppets are made from. Stories presented are usually mythical & morality tales. There is an educational moral to the plays which usually portray a battle between Malay shadow plays are sometimes considered one of the earliest examples of animation. The wayang kulit in northern states of Malaysia such as Kelantan is influenced and similar to Thai shadow puppets, while the wayang kulit in southern Malay peninsula, especially in Johor is influenced by Javanese wayang kulit.

The puppets are made primarily of leather and manipulated with sticks or buffalo horn handles. Shadows are cast using an oil lamp or, in modern times, a halogen light, onto a cotton cloth background. They are often associated with gamelan music.

The shadow play is also popular in Cambodia. It is performed during sacred temple ceremonies, at private functions, and for the public in the villages. The performance is accompanied with Pinpeat orchestra in Cambodia. 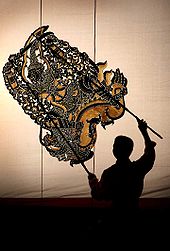 A Nang drama player and puppet.

Shadow theatre in Thailand is called Nang Yai; in the south there is a tradition called nang Talung (หนังตะลุง). Nang Yai puppets are normally made of cowhide and rattan. Performances are normally accompanied by a combination of songs and chants. Performances in Thailand were temporarily suspended in 1960 due to a fire at the national theatre. Nang drama has influenced modern Thai cinema, including filmmakers like Cherd Songsri and Payut Ngaokrachang.[7]

The Ottoman Shadow Play and its Turkish descendants

The Turkish tradition of shadow play called Karagöz and Hacivat was widespread throughout the Ottoman Empire and featured characters representing all of the major ethnic and social groups in that culture.[8][9] It was performed by a single puppet master, who voiced all of the characters, and accompanied by tambourine (def). Its origins are obscure, deriving perhaps from an older Egyptian tradition, or possibly from an Asian source.

During the 19th century these characters were adapted to the Greek language and culture, Karagöz and Hacivat becoming Karagiozis and Hadjiavatis with each of the characters assuming stereotypically Greek personalities. This tradition thrived throughout Greece after independence as popular entertainment for a largely adult audience, particularly before competition arose from television. The stories did, however, retain the period setting in the late years of the Ottoman Empire. Karagiozis theatre has undergone some revival in recent years, with the intended audience tends largely juvenile. 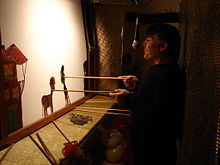 Shadow theatre itself is still popular in many parts of Asia. Prahlad Acharya is one famous Indian magician who incorporates it into his performances.

It also appears occasionally in western popular culture, for example in:

==Australia==Shadow puppets have a long history in China, India, Turkey and Java, and as a popular form of entertainment for both children and adults in many countries around the world. A shadow puppet is a cut-out figure held between a source of light and a translucent screen. Translucent color is sometimes introduced into the cut-out shapes to provide a different look and different effects can be achieved by moving both the puppet and the light source. A talented puppeteer can make the figures walk, dance, fight, nod and laugh.

Richard Bradshaw OAM is a famous Australian shadow puppeteer. His character Super Kangaroo is just one in his varied repertoire.[11] The skill of Bradshaw has been featured in television programs made by Jim Henson.

The Shadow Theatre of Anaphoria (relocated to Australia from California) combines a mixture of reconstructed and original puppets with multiple sources of lights. The company is under the direction of Kraig Grady.