Eco-Drive
This article is about wristwatches. For "eco-driving", see Fuel economy-maximizing behaviors. 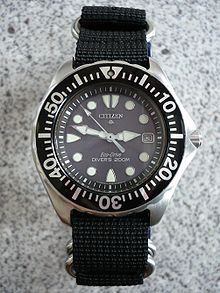 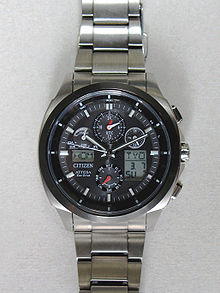 Eco-Drive is the series name of a line of mainly light powered watches manufactured by the Citizen Watch Co., Ltd. The first Eco-Drive watches were sold in 1995.[1]

Most Eco-Drive type watches are equipped with a special titanium lithium ion secondary battery that is charged by an amorphous silicon solar cell located behind the dial.[2] The titanium lithium-ion composition precludes it from being affected from the regular charge/discharge cycle of other types of rechargeable batteries. Light passes through the covering crystal and dial before it reaches the solar cell.[3]

Depending on the electronic movement model, a fully charged secondary power cell could run with no further charging anywhere from 30 days to 3,175 days (8.7 years), though most Eco-Drive men's watch models offer a six-month power reserve.[4] If kept in the dark for too long, some movement models engage a hibernate mode, where the hands of the watch stop running but the internal quartz movement still keeps track of time. If an ample supply of light is given, the hands move to the proper positions and resume regular timekeeping.[2]

Citizen also built an automatic quartz powered watch, the Citizen Promaster Eco-Duo Drive (released in December 1998).[6] Novel to this watch was the use of both mechanical power as well as a solar cell to power the electronic movement and charge the secondary power cell. This model was an attempt to enter higher-priced markets (at a cost of around $1,000 USD). The Eco-Duo Drive technology failed to attract consumer interest and Citizen has since stopped making use of the unique movement.

For water resistant and diving Eco-Drive watches Citizen recommends a watch gasket exchange every 2 or 3 years to preserve their water resistance because watch gaskets which form a watertight seal degrade as they age. Further Citizen recommends maintenance for Eco-Drive watch movements in regular intervals in order to extend the life of the watch movement, since the gears used in running watch movements are subject to slow wear.[9] Citizen states that their lubricants for Long-Lasting Precision Equipment when used in watches, timepiece movements remain smooth for a long time as the oil does not harden even after 20 years.[10]