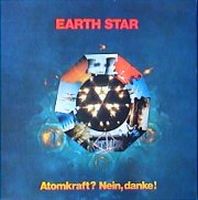 "Atomkraft? Nein, Danke!" is the third full-length album by the American electronic band Earthstar. It was their second release for the , -based on , . "Atomkraft? Nein, Danke!" was recorded during and at Deponté la Rue Studio in , , and IC Studios and Emch Studio in . Additional tracks were recorded at Aura Sound Studio in . All tracks were written by except "Golden Rendezvous," which was written by Wuest and , and "Forest Floor, Part II: Aras," a tape-loop improvisation with guitarist .

The title, "Atomkraft? Nein, Danke!" was the slogan of the German anti-nuclear movement and literally means "Nuclear power? No, thank you!" 's intention in recording this album was to create an environmental , and some tracks, particularly "Sonntagsspaziergang," have an almost symphonic sound. The Planet Mellotron Web site describes the album as "more laid back" than its predecessor "" and "...an ideal opportunity to hear the rarest tape-replay instrument," the .

The track "White Cloud" was included on the Sky Records collection "," released in . This represented the first time any Earthstar track appeared on CD. "Atomkraft? Nein, Danke!" is still available on LP from Sky Records but has never been reissued on CD in its entirety.