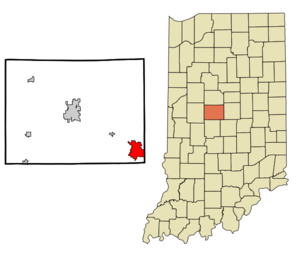 mapsize = 250x200px
map_caption = Location of Zionsville in the state of

Zionsville is a town located in the extreme southeast area of , in Eagle Township. The population was 8,775 at the 2000 census. Nearby communities include Lebanon, Carmel, Whitestown, Westfield, and the suburbs of Indianapolis.

Zionsville is most commonly known as a conservative, affluent suburb of Indianapolis. It promotes itself as a tourist attraction around its village-styled downtown area. This area primarily consists of Main Street, paved entirely in which is lined with small stores and restaurants. Businesses are, for the most part, family run. The majority of the town, however, has the look and feel of a typical smaller Indiana municipality.

The current town of Zionsville began as a promotion by railway speculator William Zion, who partnered with Boone County landowner Elijah Cross to build a railway station on Cross's land in Eagle Township. The town was chartered in 1852, and the first resident was John Miller, who built and lived in a boarding house. By the 1860 census, the population was counted at 364. In this period, local businesses and houses of worship, specifically the local and parishes relocated from nearby Eagle Village, which had also been platted on land originally owned by Cross. According to the local Chamber of Commerce made a whistle-stop speech in Zionsville in 1861 when traveling to his inauguration.

For much of the rest of its history, Zionsville has led a quiet existence, relying primarily upon its existence as a stop on passenger rail lines and later as a shopping destination or . While and other demographic changes in nearby Indianapolis greatly enlarged Carmel and , especially since the imposition of in 1970, Zionsville had remained a much smaller locale until growth began to pick up into the mid to late 1990s.

Today, Zionsville is wrestling with the prospect of being a fast-growing community. It had kept strict control on growth since the 1970s, but had since been relaxed. Nevertheless, there is tension between those who would develop the town and residents who opposed the problems attendant upon unlimited urban growth. New developments are arising on the outskirts of town that stretch northwest to Whitestown a mile away. These are not part of Zionsville, proper, but residents still require new facilities. In addition, attempts by developers have been made to secure approval for the construction of multi-story business buildings in the downtown/Main Street tourist area. Likewise, westward expansion from Carmel has begun to "spill over" into Boone County, with attendant controversy.

There were 3,063 households out of which 45.5% had children under the age of 18 living with them, 70.5% were married couples living together, 6.8% had a female householder with no husband present, and 21.4% were non-families. 19.1% of all households were made up of individuals and 7.5% had someone living alone who was 65 years of age or older. The average household size was 2.80 and the average family size was 3.23.

[http://www.zcs.k12.in.us/ Zionsville Community School Corporation] enjoys a very strong reputation. For the past half decade Zionsville schools have been in the top 5 best schools in the state according to "Indiana Monthly". Zionsville schools have rivalries with neighboring Carmel schools, Lebanon schools, and Pike Township schools in Indianapolis. The superintendent of schools is Scott Robison. The following Zionsville Schools are covered under the Zionsville Community Schools (ZCS) district, which covers a large area that extends beyond proper.

Several blocks of Main Street in Zionsville have been intentionally groomed to give off a "village" air, specifically to attract shopping from nearby larger communities. In addition, Main Street has been paved entirely in brick and the street lamps and other features (such as a lower ) are maintained to encourage visitors and residents to spend a good deal of time shopping on foot along the length of the street.

One of Zionsville's seasonal attractions, the July Fourth fireworks show hosted by the local Lion's Club, brings in people from across Indiana. Unlike many of the Independence Day celebrations in major cities, the Zionsville fireworks show has no music integrated into the performance, although there are concerts before the display.There is also the Fall Festival which has a parade featuring sports teams, organizations from Zionsville and surrounding communities, and the Middle and High School marching bands. There is also a festival at the Lion's Park with attractions like rides, games, and food. It lasts for one weekend in September.

Zionsville contains the Goldman Union Camp Institute (or GUCI), a Jewish camp that is part of the URJ (Union for Reform Judaism).