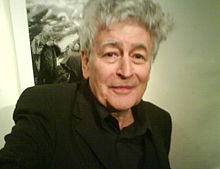 Paul Méfano (born 6 March 1937 in Basra, Iraq), is a French composer and conductor.

Paul Méfano pursued musical studies at the École Normale de Musique de Paris, and then later at the Paris Conservatory (CNSMP), where he was a student of Andrée Vaurabourg-Honegger, Darius Milhaud, and Georges Dandelot. He completed his studies in Basel at the courses taught by Pierre Boulez, Karlheinz Stockhausen, and Henri Pousseur.

He regularly attended the concerts of the Domaine Musical, as well as the seminars at Darmstadt, and enrolled in Olivier Messiaen’s class at the CNSMP. Messiaen described Méfano as "restless, intense, and always in search of radical solutions” (Pugin 2000, 15).

In 1965 his music was performed publicly for the first time, at the Domaine Musical under the baton of Bruno Maderna. From 1966 to 1968 he lived in the United States, and then in 1969 he moved to Berlin at the invitation of the German Academy of Cultural Exchange (DAAD).

In 1970 he returned to France, signed a contract with Salabert, and devoted himself to composition, to conducting, and to musical life in general. In 1972 he founded the Ensemble 2e2m, a group which he regularly conducts, and with which he has premièred more than five hundred works by young composers and with which he has made more than forty recordings. Amongst those younger composers are Stéphane de Gérando, Laurent Mettraux, Thierry Blondeau, Marc André, Michael Finnissy, James Dillon, Bruce Mather, and Claude Lefèvre, but he has also championed older composers such as Jean Barraqué, Brian Ferneyhough, Franco Donatoni, Luigi Nono, Aldo Clementi, Philippe Boesmans, Morton Feldman, Edison Denisov, and John Cage, as well as participating in the rediscovery of Charles Valentin Alkan and the Czech composers who were interred at Terezienstadt in 1940. He is the founder of the Editions du Mordant for the publication of contemporary music, and of the Editions Musicales Européennes (dedicated primarily to young composers), and he has produced a number of notable radio series (Drake 2001).

In 1972 he was appointed director of the Conservatory of Champigny-sur-Marne, a duty which he performed until 1988. He also was professor of composition and orchestration at the Paris Conservatory until 2002. One of his conducting students was the Canadian composer Claude Vivier.

From 1996 until 2005 he directed the Conservatory of Versailles.

Méfano’s compositional style has evolved considerably from his early serial work Incidences (1960) down to recent compositions which make extensive use of microtones, such as Speed (2000). His early serial style is clearly under the influence of Boulez, but the ardour of his employment of these traits “confounds the crystalline, the mirror-like and with it all suggestion of musical geometry” (Pugin 2000, 15). He has an essentially poetic conception of music, reflected in a lifelong interest in poets and poetry (Pugin 2000, 16). This is manifested especially in his treatment of instrumental color and in his vocal writing. He also has a special feeling for drama, as manifested in La cérémonie. At the beginning of the 1970s he experimented with electronics (La messe des voleurs), and with its real-time combination with instruments. Though he has shown interest in the music of the spectralist composers, his own compositions are not at all similar, and today he is regarded as a “post-spectralist” composer (Pugin 2001, 38). Many of his works explore and develop contemporary techniques for the flute, such as in Captive, Eventails, Gradiva, Traits suspendus, or Ensevelie. His earliest works (Trois chants crépusculaires) maintain links with tonality, to which he returned in Micromégas. Since this work he has remained faithful to serial technique (Drake 2001).

He has been awarded the following prizes and honors:

This article draws on material from the Spanish and French Wikipedias