The American Folk Art Museum is a museum devoted to American folk art, as well as the work of international self-taught artists. It has branches at 45 West 53rd Street, between Fifth and Sixth Avenues, in Midtown Manhattan (New York City and 2 Lincoln Square by Lincoln Center, USA).

The museum was founded on June 23, 1961, and opened its doors to the public for the first time on September 27, 1963, in the rented parlor floor of a townhouse at 49 West 53rd Street.[2] In 1979, the museum purchased two townhouses adjacent to 49 West 53rd Street. While plans for a development of these properties were being devised, the institution continued to present its exhibitions in the rented gallery until 1984, when it opened facilities in a former carriage house at 125 West 55th Street. That building, however, was razed just two years later, leaving the museum without galleries of its own for almost four years. During that time, the institution continued to organize a full schedule of exhibitions and educational programs, utilizing public spaces and corporate galleries, and offered an extensive traveling exhibition program to museums throughout the country. In 1989, exhibition facilities at 2 Lincoln Square, opposite Lincoln Center for the Performing Arts, were opened.

Diversity in programming became a growing emphasis for the institution in the 1990s. Major presentations of African American and Latino artworks became a regular feature of the museum's exhibition schedule and permanent collection. In 1998, the formation of the Contemporary Center was announced, a division of the museum that is devoted entirely to the work of 20th- and 21st-century self-taught artists, as well as non-American artworks in the tradition of European art brut. Within a short time, the Contemporary Center established a leadership role in this field. In 2001, the Center announced the acquisition of twenty-four works by Chicago artist Henry Darger, as well as a huge archival collection of Darger’s books, tracings, drawings, and source materials, which combined now form the basis of the Henry Darger Study Center.

As the collection and the reputation of the museum continued to mature, so did the effort to develop a permanent home. It was determined that the museum would erect a 30,000-square-foot (2,800 m2), eight-level structure on the 45 and 47 West 53rd Street lots, to be designed by the internationally recognized firm of Tod Williams & Billie Tsien. This building was inaugurated on December 11, 2001.

During the more than four decades of growth and development, the museum has enlarged its mission and extended the purview of its interests. Known initially as the Museum of Early American Folk Arts and concerned principally with the vernacular arts of 18th- and 19th-century America, especially of the Atlantic Northeast, the institution adopted a simpler but more inclusive name in 1966: the Museum of American Folk Art. As an expression of a further extension of mission, the institution chose its current name, American Folk Art Museum, in 2001. Recognizing that American folk art could be fully understood only in an international context, the word American functions as an indication of the museum's location, emphasis, and principal patronage rather than as a limitation on the kinds of art it collects, interprets, or presents.

In 2007, it was among over 530 New York City arts and social service institutions to receive part of a $20 million grant from the Carnegie Corporation, which was made possible through a donation by New York City mayor Michael Bloomberg.[3] 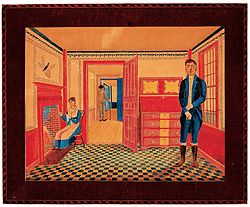 The museum began to build a collection almost immediately after it was established. The now iconic Flag Gate (c. 1876) was its initial accession, in 1962, followed, a year later, by the Archangel Gabriel Weathervane (c. 1840) and the monumental St. Tammany Weathervane (c. 1890), now a centerpiece in the museum. The purchase, in 1979, of the famous Bird of Paradise Quilt Top (1858–1863) represented a turning point: The art of quiltmaking would become a major emphasis in the collection and public programs of the institution. Throughout the 1980s, the permanent collection continued to grow with major acquisitions of early American folk art, including Ammi Phillips’s masterpiece, Girl in Red Dress with Cat and Dog (1830–1835).

Throughout the late 1960s and early 1970s, the institution was recognized for its lively exhibitions, many of which were pioneering in scope, including the wide-ranging and influential "Twentieth-Century American Folk Art and Artists" in 1970, which explicitly took a broader view of the field than that originally articulated by the organization's founders. In this and other exhibitions, the museum argued against the notion that the creation of folk art was a thing of the past.

In anticipation of the completion of the new building in 2001, more than four hundred important works of early American folk art from the renowned collection of Ralph O. Esmerian were promised to the museum. These included a comprehensive collection of Pennsylvania German material, Shaker gift drawings, needlework samplers, and paintings by artists such as Edward Hicks and Sheldon Peck. 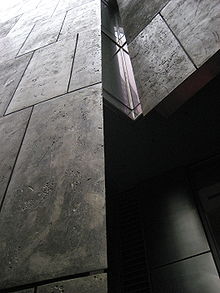 The striking building now housing the American Folk Art Museum allows the institution to display more than five hundred artworks from its collection of more than five thousand objects.

The façade of the 85-foot (26 m) tall building is clad in sixty-three textured panels of a lustrous white bronze alloy known as Tombasil. The material—never before used architecturally—is faceted in three large planes that evoke the human hand and catch the light at different angles. A large skylight crowns a ceiling-to-floor open core, sending natural light through the entire height of the building.

Intimate areas, reflecting the domestic scale of much of the museum's collection, allow for a personalized art experience. Open galleries feature spaces for the display of larger, more dramatic works. A unique cantilevered concrete stairway connects all levels of the building. Additional types of staircases not only provide varied paths of circulation between floors but also give visitors different visual experiences.

Tod Williams Billie Tsien Architects have won numerous awards for the building—among others, an American Institute of Architects National Honor Award (in 2003); the World Architecture Awards for Best Building in the World, Best Public/Cultural Building in the World, and Best North American Building, as well as the New York City American Institute of Architects Design Award (all in 2003); and the Municipal Art Society New York City Masterwork Award (in 2001).[4]

The building is adjacent to the Museum of Modern Art, which is buying the building on West 53rd Street of the now-struggling American Folk Art Museum, as reported in the New York Times, on May 11, 2011. The museum had taken on $32 million in debt to build the 53rd Street structure and then defaulted on the debt.[5] MOMA paid $31.2 million for the structure.[6]