The Concourse Line is an IND subway branch line of the New York City Subway system. It runs from Norwood – 205th Street in Norwood, Bronx to 145th Street in Harlem, Manhattan. It is the only "B" Division and only fully underground line in the Bronx.

The Concourse Line begins as a two-track line at Norwood – 205th Street. As it travels west, a center track forms which leads to the Concourse Yard. The line then curves south to the Grand Concourse, which it derives its name from since it runs underneath the roadway for most of its route. Two tracks from the Concourse Yard arrive between the two revenue tracks with switches and diamond crossovers between all four of them before the yard tracks merge is one to form the center track at Bedford Park Boulevard. 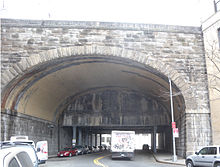 South of this station, the two outer tracks merge as one center express track while the center track splits in two and become the local tracks of the Concourse Line. The line then runs consistently to the south with diamond crossovers at Tremont Avenue. Due to the terrain, the vicinity of 174th–175th Street station is uniquely built both underground and over 175th Street. Between 170th Street and 167th Street there are more switches and crossovers with a lay-up track adjacent to the Manhattan-bound local track.

The line curves west before 161st Street – Yankee Stadium and crosses the Harlem River into Manhattan via the Concourse Tunnel. There is one more stop, 155th Street, before the line curves south joins the IND Eighth Avenue Line at the lower level of 145th Street.

On December 15, 1940, with the opening of the IND Sixth Avenue Line, the D train began serving the IND Concourse Line with the C and CC. It made express stops in peak during rush hours and Saturdays and local stops at all other times. C service was discontinued in 1949-51, but reinstated in 1985 when double letters used to indicate local service was discontinued. The D made local stops along the Concourse Line at all times except rush hours, when the C ran local to Bedford Park Boulevard. On March 1, 1998, the B train replaced the C as the rush-hour local on the Concourse Line.

Except for minor maintenance work and a station rehabilitation at 161st Street – Yankee Stadium, the Concourse Line is largely untouched since its opening in 1933, except for entrance closings and other reductions in service areas. The MTA claims to be renovating each station on the line after its 75th anniversary.