Rugby is played throughout universities in the United States of America.

In the United States, college rugby is governed by (in descending order of authority): the International Rugby Board, USA Rugby, territorial unions and local area unions (e.g., NERFU). At present, the NCAA has no authority over college rugby. Often called a club sport, each individual team is administered by either the athletic department or the student club department.

With the addition of Rugby 7s to the 2016 Olympic games, the collegiate ranks expanded into the 7s game. The premiere collegiate 7s competition is the Collegiate Rugby Championship (CRC). The CRC was first held in Columbus, OH in June 2010 at the Columbus Crew Stadium. That inaugural event was also televised by NBC and NBC Universal. The result was high ratings leading to a second tournament in 2011 to also be covered by NBC. However, the attendance figures were low in Columbus and the venue was moved to Philadelphia to be hosted at PPL Park.

2011 saw the largest change to the collegiate rugby structure since the 1980 inception of the national championship. The College Premier Division (CPD) was created with the intention of refining topflight collegiate rugby. To do so 31 schools joined together to form a new division of American rugby.[5]

In 2011, USA Rugby continued to urge college rugby programs to adopt new conference structures similar to the conferences used by their other athletic programs. The highest profile example was the formation of the Ivy League Rugby Conference in 2010. This effort has trickled down to Division II, and is expected to impact Division III in 2012. This move signals a shift away from the LAUs and TUs as the governing bodies for regional college rugby. 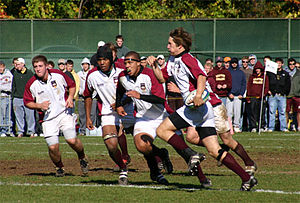 A BCRFC match at Boston College

American college rugby is governed by the International Rugby Board, USA Rugby, and the respective territorial and local area unions.

USA Rugby maintains strict eligibility guidelines, which are administered at the local level by the local area unions. College players generally have 5 years of rugby eligibility from the time they first enter college, but exceptions can be made for military service, or pregnancy.

Liability is mitigated by the CIPP insurance program. This program provides liability insurance to all rugby teams and players in exchange for an annual dues payment (currently $30/year). This policy provides the player, the team, its administrators and pitch hosts with liability coverage in the event of any injury. The program is administered by USA Rugby.

Some winning clubs choose not to exercise this right to advance, instead preferring to stay in the lower club division, either because they are a very small college with a small rugby budget, or because they wish to remain competitive against lesser opponents. For example, Furman University (an NCAA Division I institution) is a perennial Division III rugby powerhouse, yet they have consistently declined promotion to Division II. Similarly, Plymouth State University declined promotion to D2 despite winning the 2008 D3 NSCRO National championship.

Other clubs are offered promotion, despite not winning their conference, based upon their strength of play. For example, Iowa State Men's Club was allowed to move up to D1 from D2 because they had performed so well in the 2006 Big 12 tournament, losing to fifth ranked Texas A&M in overtime after winning the competition 2 previously (while being the only D2 team competing). Southern Connecticut State University was moved from D3 to D2 despite losing to Salve Regina University 21-20 in the 2008 NERFU College Men's Division III Rugby Tournament. See also Promotion and relegation. 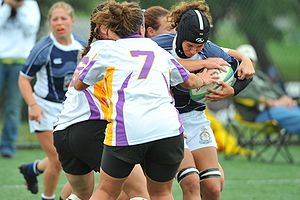 A 2008 Penn State Lady Ruggers match vs the West Chester University of Pennsylvania Rams. Nichole Lopes '07 '09 with the ball for Penn State

The National Collegiate Athletic Association identified women's rugby as an "Emerging Sport" in 2002. An "Emerging Sport", a category that includes sand volleyball and equestrian, must gain championship status (minimum 40 varsity NCAA programs for individual sports and 28 Division III varsity programs for team sports) within 10 years or show steady progress toward that goal to remain on the list.[6] Until then, it is under the auspices of the NCAA and its respective institutions. With only 5 teams, Emerging Sport status in any sport allows for competition to include club teams to satisfy the minimum number of competitions bylaw established by the NCAA.