David Kross
Not to be confused with David Cross.

David Kross (born July 4, 1990) is a German actor. He is best known internationally for his role as Michael Berg in The Reader.

Kross was born in Henstedt-Ulzburg, 20 miles north of Hamburg. He grew up in Bargteheide, where he attended Eckhorst High School[1] until 2007. He has two brothers and one sister. He played basketball at the professional TSV between 2004 and 2006. 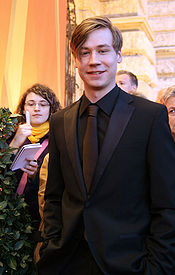 His career started with a small appearance in the 2002 film Hilfe, ich bin ein Junge (English: Help, I'm a Boy!).[2] In December 2003, he joined Blaues Wölkchen, a small group from a children's theatre in Bargteheide. His first major theatrical appearance was in Auftritt in Kirsten Martensens Inszenierung Von Hilfe.[citation needed]

In 2005, Kross came to the attention of Detlev Buck through his daughter Bernadette, and auditioned for Tough Enough;[3] Buck hired Kross to play the lead,[4] a 15-year-old boy who moves with his mother from a rich neighborhood of Berlin (Zehlendorf) to the Neukoelln area, known at the time for its high number of Turkish immigrants and high crime level. Kross not only won praise at Berlinale in 2006, but also won Best Actor in Nuremberg at the 11th Filmfestival Deutschland/Tuerkei.[5]

In 2006, Kross worked again with Buck in the film Hands Off Mississippi (Hände weg von Mississippi in German), playing a baker apprentice. In the fall of the same year, he started shooting a film by Marco Kreuzpaintner, Krabat (The Satanic Mill in English). In this version of Otfried Preußler's children's book, Kross plays the title role, one of the apprentices of magic, with co-stars Daniel Brühl and Robert Stadlober. The film was released on September 19, 2007 in movie festivals and in October 2008 in theatres.

In September 2007,[6] The Reader began shooting in Berlin, Cologne,[7] and Gorlitz. In Stephen Daldry's adaption of the best-selling novel by Bernhard Schlink, Kross plays the lead role of Michael Berg, opposite Kate Winslet, Ralph Fiennes and Bruno Ganz. He had to learn to speak English to appear in the film.[8] The world premiere was at the Ziegfeld Theater in New York on December 3, 2008. The film was presented in the 2009 Berlinale but did not compete. In May 2009, Kross was honored for his performance in The Reader at the 62nd Cannes Festival, winning the Chopard trophy. Kross was nominated for an European Film Award as best actor.

His next work was in Same Same But Different, again with Buck directing. The script is based on an autobiographical article by Benjamin Prüfer. The movie was shot in Cambodia and released on January 21, 2010.[9][10]

In 2009, Kross started a 3-year course of studies at London Academy of Music and Dramatic Art (LAMDA).[13] His plan was to improve his acting skills and his English. However he dropped out at the end of the same year. Since then, he has been living in Berlin-Charlottenburg. 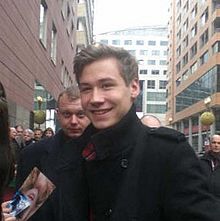