Dog's Life is a video game published by Sony Computer Entertainment Europe for the Sony PlayStation 2.

Dog's Life received mostly average review scores,[2][3] with critics praising the game for its originality and fun factor,[4][5] while criticising its audiovisuals.[6][7]

According to the Guinness World Records Gamer's Edition 2009, Dog's Life holds the world record for the most video game voice-overs done by one person: Kerry Shale voiced 32 characters from the game.[8]

Set in rural midwest US countryside, Dog's Life sees its hero embark on an epic journey that spans the US, taking in everything from ski resorts to vibrant cities along the way. Playing as the nimble-pawed protagonist Jake, a plucky pup with a nose for adventure, the player must sniff out a sinster dog-napping plot involving the canine-hating Miss Peaches and Jake's pedigree chum, Daisy.

Dog's Life allows the player to take the role of a lifelike hound, able to fetch, sniff out food, chase chickens and explore.[9] An American Foxhound named Jake is the main character and his overall objective is to save Daisy, a Yellow Labrador Retriever whom Jake is keen to impress, and a lot of other dogs from a crooked cat-food company CEO, Miss Peaches and her two henchmen, Wayne and Dwayne. Bones must be collected to advance through the game and they can be obtained by digging them up, by beating other dogs in a variety of challenges, by completing tasks given by human characters, and by collecting special smells. After Jake has rescued all the other dogs, he proceeds to the catfood processing plant where Daisy is held.

Upon arriving at the plant, Jake finds Daisy about to be killed and processed by the deadly cat-food machinery. After the machine is temporarily disabled, Miss Peaches arrives to finish the job and is knocked into the catfood-machine by Jake. The machine traps her in a can and sends her down a conveyor belt. After trying to escape, the machine recognizes its mistake and pulls Miss Peaches back to be killed. The machine then crushes and blends up Miss Peaches' body while she screams in agony. Her pureed body is then canned and sold as cat food. Jake and Daisy return home safely and the story is concluded. 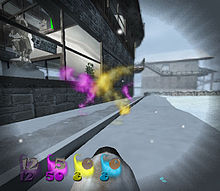 The game allows the player control or interact with over 15 breeds each with distinct traits and abilities. They handle things in a different way, that can also be used in challenges or puzzles.[9]

The game is divided into three areas: Clarksville, a rural town; Lake Minniwahwah, a ski resort; and Boom City.[9] These are then divided into smaller areas such as districts or farms. In every area are humans willing to give missions in exchange for bones. Bones can also be found buried underground or hiding somewhere. 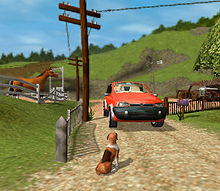 Jake at the Farmhouse area in Clarksville

Certain smells picked up through the game's "Smellovision" will activate challenges against a local dog. In each small section of the game there are four challenges, two of which are to find eight smells of the same colour and compete against a local dog. These missions include races, obedience trials, tug-of-war games and a territorial game where the player must run around urinating in marked areas to obtain territory.[9]

There are also salons in some levels where Jake can get his coat cleaned and brushed. He also gains a shiny new collar with a silver 'J' at the front.

Once these dogs are beaten, the player is able to take control of that dog and use their special abilities to find other bones. Other challenges include scent-collecting challenges, and a minigame called "Doggy Do", where the player must copy the moves of the local dog. There are also dangers in certain areas, such as the dog catcher and his Doberman. The player must also keep the Jake healthy by feeding him, allowing it to defecate and coax people into giving the player snacks by growling and barking or performing tricks unlocked by doing the obedience trials. Jake is able to do a range of tricks including begging, sitting, lying down and marking his territory.

Jake can interact with NPC's some things include chasing chickens, steal sausages, and shake kittens.[9]

Gamespot rated it as 7.0 out of 10 while saying it was charming, silly, and an easy action game and has annoying quirks. It also said: "There's not a whole lot to Dog's Life, but what's there is entertaining enough, and it certainly lets you do things you can't do in just about any other game."[4]

Game Informer named the game one of the top ten weirdest of all time.[12]

IGN gave the game a 7 out of 10, citing the gamplay as "simple and well-executed", but noting that the visuals "look like the game was ripped from a PSone title" and that the audio "is all over the place."[6]

Eurogamer said it was very amusing but they said for experienced gamers, it is plainly not for them the game reaches more for ten year olds or under especially with its fart gags and hardly but, not at all challenging. But on the bright side they thought the game had a "Warm sense of humour, cute visuals and the fact that, well, controlling a dog around is actually quite cool."[10]

GameSpy rated the game 3 stars out of 5. They said the dogs were well animated and controllable, but that the graphics were bland. Also, they said the music was repeating and very irritating. Further, they said that the game appeals more to younger kids than teens. In conclusion they say the game is an "Entertaining family game that's a nice change of pace from the standard fare."[7]

GameZone said: "Dog’s Life is truly unlike any other game on the market, which is a complete pleasure to play with its witty, if not sophomoric humor and innovative gameplay." They said the graphics were well detailed and animated. They said the music and sound was realistic.[5]